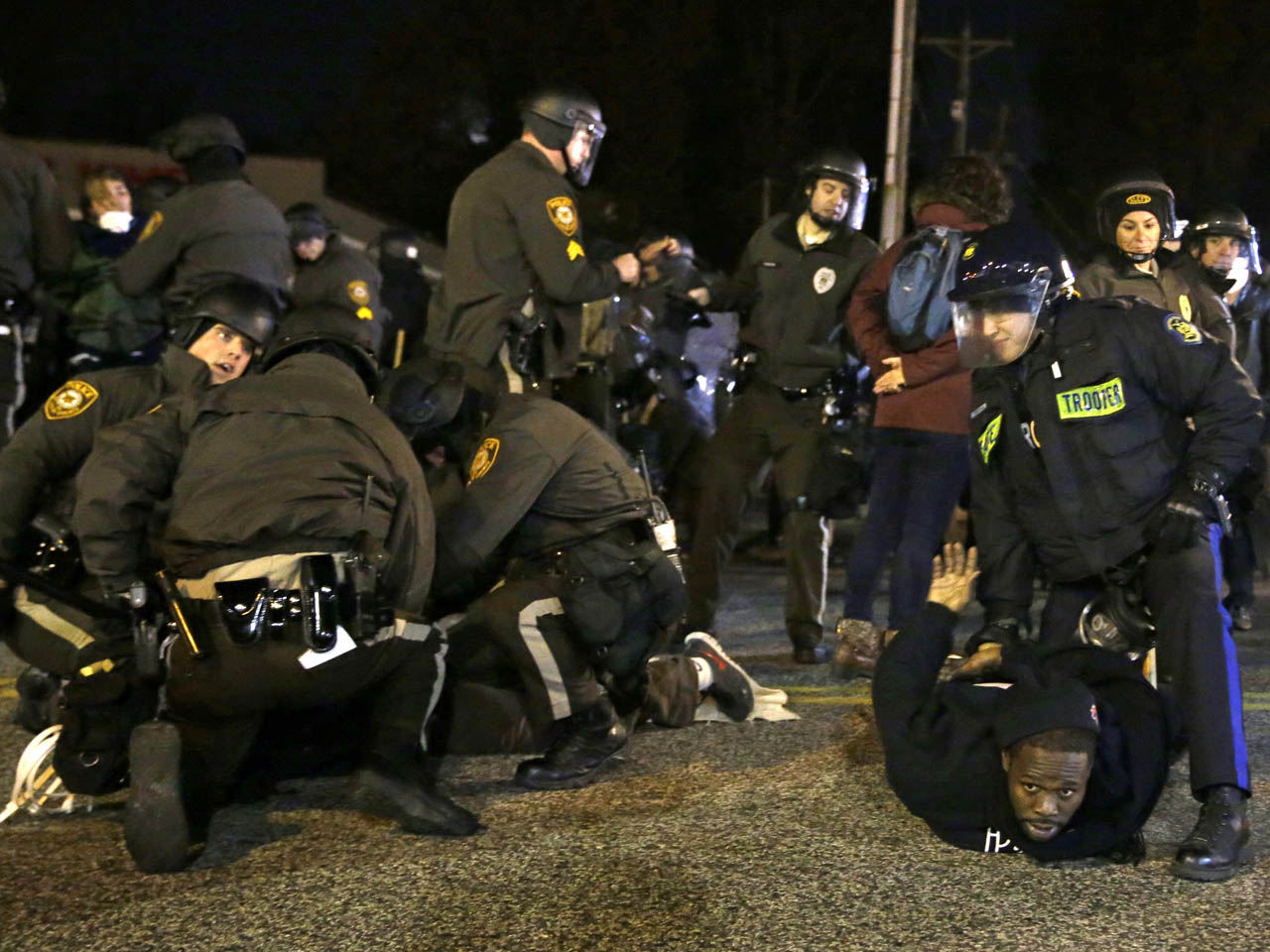 FERGUSON, Mo. - Life may not return to normal in Ferguson for a long time, but there are signs that people in the community are trying to move on after days of intense unrest over the grand jury decision in the Michael Brown case.

The St. Louis suburb of 20,000 residents was ravaged by looting and violence in the immediate aftermath of the Monday announcement that the grand jury didn't indict Ferguson police Officer Darren Wilson in the killing of Brown. Wilson, who is white, shot and killed the unarmed, black 18-year-old during an Aug. 9 confrontation.

Several businesses in Ferguson and neighboring Dellwood were burned to the ground during the unrest, mostly along West Florissant Avenue, not far from where Brown was killed. More than 100 people have been arrested in Ferguson since Monday, including 16 at a protest Friday night outside the police station.

Although the demonstrations, which have also been taking place in other U.S. cities, could last for weeks in Ferguson, a sense of normalcy - or at least a new normal - has begun to settle on the city.

Police reopened several blocks of West Florissant that had been barricaded off since Tuesday, but only during daylight hours. And although most store windows are still boarded up, many now have spray-painted messages saying they are open and welcoming shoppers.

Some business owners spent an unseasonably warm Saturday tidying up, hoping that customers would soon return.

"There is no business," said Nick Ahmed, 41, a native Palestinian who owns Elite Liquor on West Florissant. "I can't pay the rent or my electric bills."

Ahmed said he's certain some of his fellow merchants will leave, but he won't.

Tracy Ballard, 44, brought her 7-year-old daughter to Ahmed's store to buy candy and soda, before a trip to the beautician up the street. Ballard said she wanted to show support for Ferguson businesses.

"I feel sad for the business owners," Ballard said. "It's really sad it had to come from this. We just wanted justice. If we'd have had justice, none of this would have happened."

The protests have hurt business throughout the St. Louis area, not just in Ferguson. Protesters disrupted shopping in suburban St. Louis for the second straight day on Saturday, marching through a Trader Joe's store in Brentwood, about 10 miles south of Ferguson. After leaving the store they briefly blocked Eager Road near Interstate 170.

On Friday, three St. Louis-area malls were briefly shut down due to demonstrations. Protest organizers planned to meet later Saturday to map out their plans for the coming days.

People from out of state continue to swell the ranks of the demonstrations in Ferguson. All but one of the 16 people arrested while protesting outside of Ferguson police headquarters Friday night were from out-of-state, including eight from New York City.

At the protest Friday that resulted in the latest arrests, a number of demonstrators were apparently from an out-of-town communist group holding up a sign that read "Progressive Labor Party," reports CBS News producer Jonathan Blakely. Wearing gas masks and goggles, despite the fact that no tear gas was used, they chanted phrases such as:

"Who do we want? Darren Wilson! How do we want him? Dead!"

"The only solution is a communist revolution!"

"Turn your guns around and shoot the bosses down!"

Demonstrators are spreading their message in new ways, too. Several people on Saturday began a march from Canfield Drive, where Brown was killed, to the governor's mansion in Jefferson City, 120 miles to the west. The 120-mile march, organized by the NAACP, will take seven days.

Organizers say the purpose is to call for new leadership in the Ferguson police department and for police reforms in Ferguson and across the country.

Meanwhile, Missouri Gov. Jay Nixon on Friday announced that he will call a special session of the General Assembly to provide funding for public safety efforts related to protests. A news release from his office said that due to the increased presence of the State Highway Patrol and the Missouri National Guard in the region, the state's financial obligations for emergency duties are on track to exceed what had been appropriated.