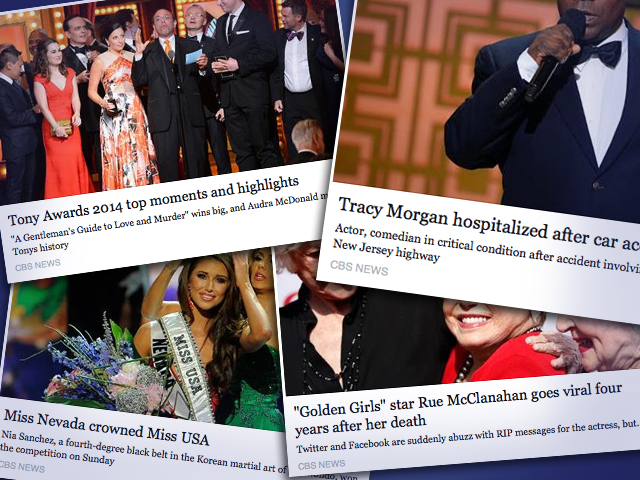 Jim Carrey and Jeff Daniels are back in the first trailer for "Dumb and Dumber To," and Broadway celebrated its best and brightest at the Tony Awards.

Fans and famous folk alike also sent well-wishes to Tracy Morgan this week, a new Miss USA was crowned and binge-watchers settled in for a new season of "Orange is the New Black."

Facebook has tallied the top 10 buzziest stories in entertainment this week, and all of those topics made the most-talked-about list. What had you talking? See what you missed in this exclusive list on CBSNews.com.

1. "Dumb and Dumber To" trailer released

Carrey and Daniels unveiled the first official trailer for their "Dumb and Dumber" sequel this week on the "Tonight Show," nearly 20 years after the original film was released. This time around, nitwits Harry (Daniels) and Lloyd (Carrey) are searching for Harry's adult daughter.

Which stars and shows walked away winners on Broadway's biggest night? Neil Patrick Harris, Bryan Cranston and Audra McDonald were among those who scored acting prizes, while "A Gentleman's Guide to Love and Murder" received the coveted award for best musical. And there were plenty of performances too -- from Harris' "Hedwig and the Angry Inch" to host Hugh Jackman rapping "The Music Man" with LL Cool J and TI.

3. Sir Mix-A-Lot Performs "Baby Got Back" with Seattle Symphony

The Seattle Symphony traded in its usual classical fare for a little "Baby Got Back" this week at its annual Sonic Evolution concert. The orchestra was joined by Sir Mix-a-Lot himself for a performance of his famous tune celebrating ample posteriors.

Actor and comedian Tracy Morgan was critically injured Saturday after a tractor-trailer crashed into his chauffeured SUV limo on the New Jersey Turnpike. Three others were injured, and comedian James "Jimmy Mack" McNair, was killed in the crash.

Morgan's rep said this week that he's showing signs of improvement, and fellow comedians including Chris Rock have been sending good wishes his way.

Richard Dunn may have been all alone when he recorded a self-made music video for Celine Dion's "All By Myself" while he was waylaid overnight at Las Vegas' McCarren International Airport, but now the video's gone viral and he's certainly not solo anymore. It's been viewed more than 12 million times, and it's even been seen Dion herself -- and she posted her own video telling Dunn how much she loved it.

The social media universe was abuzz this week with rest-in-peace messages for "Golden Girls" star Rue McClanahan. The thing, though, is she died back in 2010. How did so many people get swept up in the online frenzy? Whatever the reason, it's another opportunity to thank McClanahan (and the rest of the "Golden Girls" ladies) for being a friend.

7. Netflix Releases Season 2 of "Orange is the New Black"

The ladies of Litchfield are back for another season of "Orange is the New Black." Netflix released a new batch of 13 episodes on Friday, and we won't judge if you did nothing else over the weekend besides watch them all the way through. And if you haven't started yet, what are you waiting for?

Meet the new Miss USA -- Miss Nevada Nia Sanchez, 24, hails from Las Vegas and has a fourth-degree black belt in taekwondo. She beat out 50 other contestants from all the states and the District of Columbia for the title at the Miss USA competition Sunday night in Baton Rouge, La.

9. Jimmy Fallon and Jennifer Lopez fight over their "Tight Pants"

Jennifer Lopez scared the (tight) pants off Jimmy Fallon in a "Tonight Show" skit that had both of them dancing in and singing about their form-fitting trousers. It's all fun and playful banter at first, but then Lopez goes all "Jenny from the Block" on Fallon and asserts her tight-pants territory.

Good news for "PLL" fans -- ABC Family has renewed the series for another two seasons of twists, shockers and cliffhangers. The network also released a sneak peek at this Tuesday's episode, which you can check out below:

*Buzz rankings reflect the top entertainment topics being discussed on Facebook, June 8-11, in the United States. Rankings are based on both frequency and momentum: the Facebook conversations that not only got a lot of buzz during the week, but also saw a notable increase compared with the previous week.