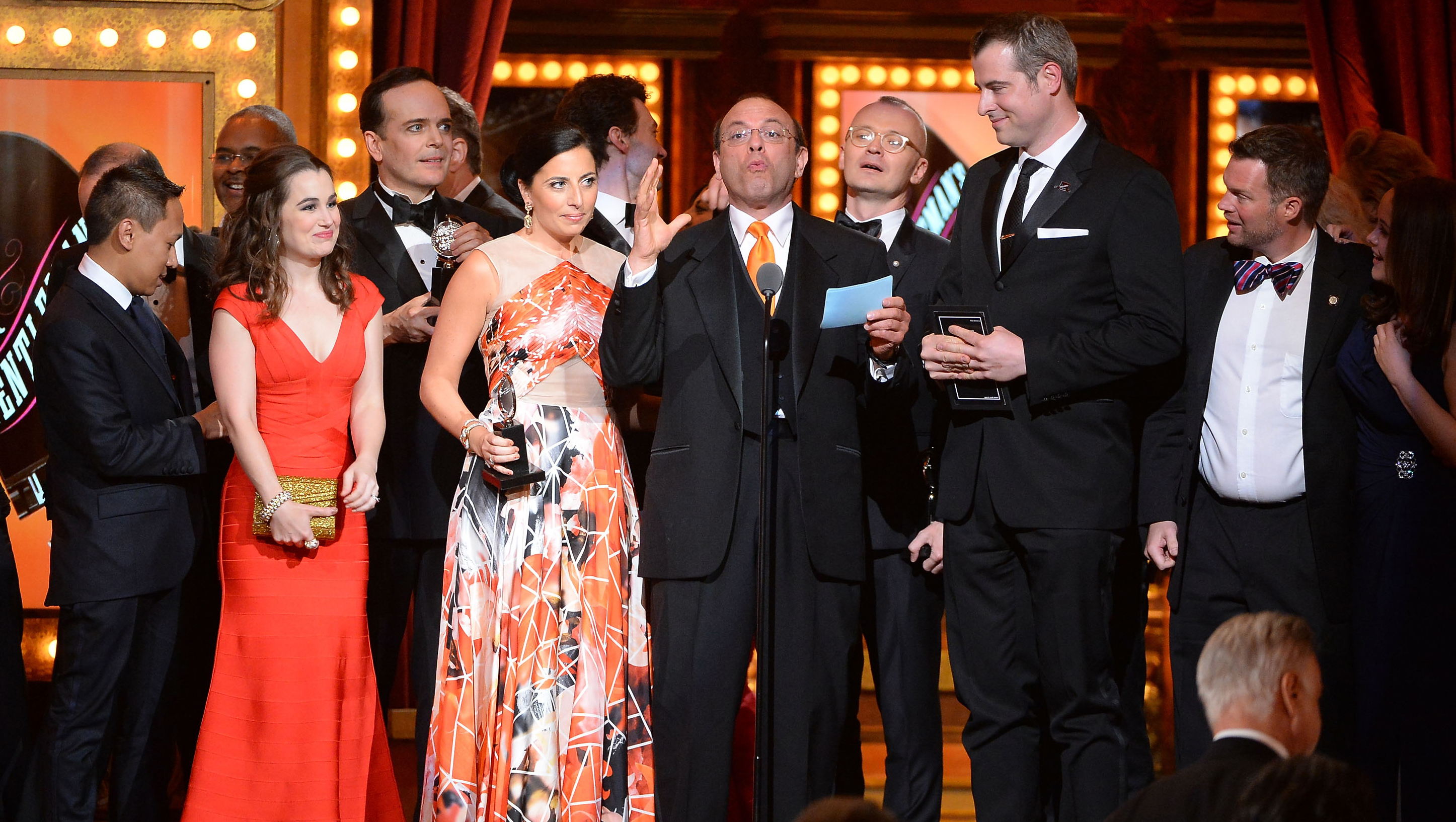 The 68th annual Tony Awards saw firsts for Bryan Crantson and Neil Patrick and a record-breaking win for Audra McDonald.

Broadway's biggest night honored "A Gentleman's Guide to Love and Murder" with best musical and "All the Way" for best play. Both productions scored four honors each.

"The little engine that could, did," said Joey Parnes lead producer of "A Gentleman's Guide." "Please go see them all!" he urged about the other Broadway musicals.

The awards show got off to a hoppin' start with Hugh Jackman Sunday in New York. The evening's host entered Radio City Music Hall hopping his way from the city streets, down the aisles and then backstage where he proceeded to meet the cast members from many of today's biggest Broadway shows.

He jumped-rope with the star of "Rocky," rubbed elbows with Neil Patrick Harris and said hello to Sting before making his way back to the stage to introduce the evening's first performance: Patti LaBelle, Gladys Knight and Fantasia who performed a number from "After Midnight."

After catching his breath, Jackman told the crowd, "It's great to be back as your host. Tonight is a celebration of Broadway."

It sure felt that way, especially for McDonald, who made Tony history on Sunday. She won best lead actress in a play for her portrayal of Billie Holiday in "Lady Day at Emerson's Bar & Grill," marking her sixth Tony and making her the biggest Tony winning performer of all time. She now tops five-time Tony winners Angela Lansbury and the late Julie Harris. McDonald dedicated her honor to the late Holiday, saying, "You deserve so much more than you were given on this planet."

"All the Way" won best play -- and its lead star, Cranston, snagged his first Tony, taking home best lead actor in a play for playing former President Lyndon B. Johnson in his Broadway debut. The former "Breaking Bad" star beat out Samuel Barnett from "Twelfth Night," Chris O'Dowd from "Of Mice and Men," Mark Rylance of "Richard III" and Tony Shalhoub with "Act One."

The lead actor in a musical honor went to Harris for his portrayal of a German transsexual in "Hedwig and the Angry Inch." Upon hitting the stage, the former "How I Met Your Mother" star said, "A year ago I was hosting the Tony, this is crazy pants!"

And now he has a Tony to his name. The actor edged out Ramin Karimloo of "Les Miserables," Andy Karl from "Rocky" along with Jefferson Mays and Bryce Pinkham, who both star in "A Gentleman's Guide to Love & Murder."

Prior to his Tonys acceptance Harris did a rousing performance from "Hedwig" during which he gave Sting a lap dance and planted a passionate kiss on his husband David Burtka.

Jessie Mueller won her first Tony -- best lead actress in a musical -- for playing the title role in "Beautiful: The Carole King Musical."

"You have taught me so much...You are just such an amazing woman," she told an emotional King, who watched from the crowd.

The first award of the night went to Rylance of "Twelfth Night" for best performance by an actor in a featured role in a play. This marked his third Tony after having previously won for "Jerusalem" and "Boeing-Boeing."

Lena Hall of "Hedwig and the Angry Inch" took home the award for best feature performance by an actress in a musical. She gave an enthusiastic speech, sending birthday wishes to her father and telling the crowd, "Friendship is magic."

When Darko Tresnak scored the directing honor for "A Gentleman's Guide to Love & Murder," he thanked his mother, a skydiver during World War II.

Kenny Leon walked away with his first Tony tony award -- scoring a directing honor for "A Raisin in the Sun" and giving a shout-out to the play's star Denzel Washington.

Going into the night "A Gentleman's Guide to Love and Murder" led the pack with 10 nominations, followed by "Hedwig and the Angry Inch" with eight nods. "After Midnight," "Beautiful - The Carole King Musical," "The Glass Menagerie" and "Twelfth Night" were all up for seven nominations each.

Performances included an impressive rendition of "One Day More" by the cast of "Les Miserables," along with a medley from "Aladdin." And as Jackman said, the "wickedly talented" Idina Menzel took the stage to perform a song from her musical "If/Then."

Jackman kept the momentum going throughout the night, pitching in for a rendition of "It Don't Mean a Thing (If it Ain't Got That Swing)" and rapping with LL Cool J and T.I.

Winners of Tonys, which aired on CBS, were chosen by about 870 voters who are part of the the Actors' Equity Association, the Dramatists Guild, the Stage Directors and other organizations.

Jackman wrapped up the evening by asking this year's winners to join him onstage for a rendition of "Lullaby of Broadway."

Tell us: What was your favorite Tonys moment?