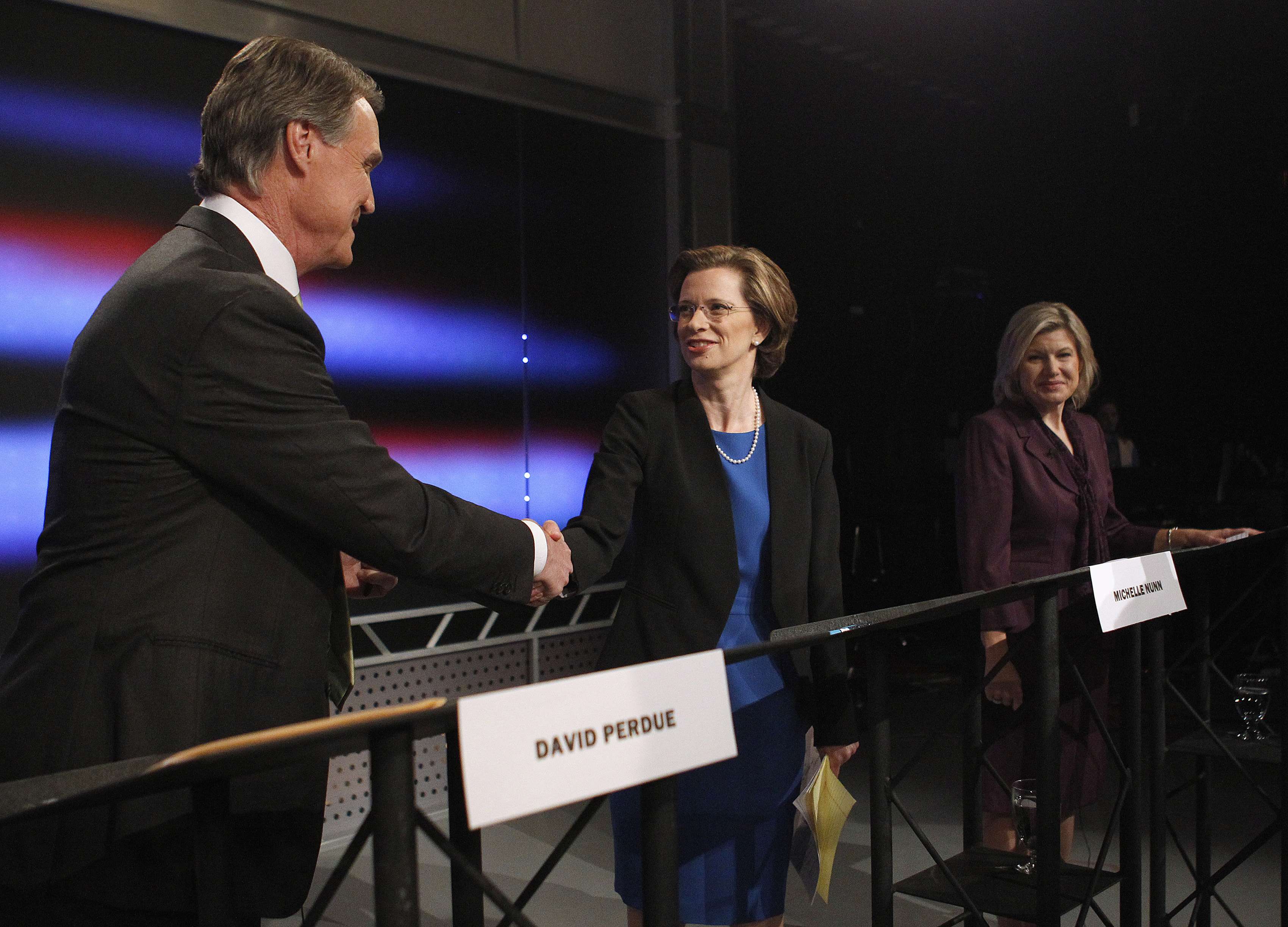 Amanda Swafford won't be in the Senate next year, but her place on the Georgia ballot could influence who represents the Peach State -- and it's even possible her candidacy could help swing control of the Senate.

Swafford is the Libertarian candidate for Senate in the race to replace retiring Rep. Saxby Chambliss, R-Ga., where Democrat Michelle Nunn is locked in a tight race against Republican David Perdue. It's possible that neither Nunn nor Perdue could win more than 50 percent of the vote on Election Day -- in part because Swafford's marginal presence in the race. If no candidate wins more than half the vote, the race will go to a runoff on Jan. 6. That means it's theoretically plausible that control of the Senate may not be determined until next year because of the Libertarian.

"It's possible -- though not probable -- that the Georgia race could decide control of the Senate," Geoffrey Skelley of the University of Virginia's Center for Politics told CBS News. "Democrats would have to have a much better night than we're anticipating, but the way most of these elections are shaping up, there are no absolute certainties."

Swafford is one of a handful of third-party candidates who are adding an element of mystery to the outcome of Tuesday's elections. Those candidates could play the role of spoiler in Senate races in North Carolina, Alaska and Louisiana, as well as in governor's races in states like Georgia, Maine and Florida.

Even at this point in the election season, it's difficult to tell how much of a role these candidates will have in the outcomes, Elaine Kamarck of the Brookings Institution told CBS News.

"The problem with third parties and the polling right now is that the number of people who show up in a sample saying they're going to vote for a third party is so infinitesimal, you can't tell if they're making a difference," she said.

If this year proves to be wave election, with voters largely moving toward the GOP, they're unlikely to have much impact at all.

"In big elections where there is a national trend that moves in one direction, the third parties are pretty irrelevant because the winners pick up points in the end," Kamarck said. However, "If there isn't a national dynamic present and these races are very close, then third parties could make a difference in some."

If anyone can understand the potential impact of third-party candidates, it's Kamarck, who worked as a senior policy adviser to the Gore campaign in 2000. "Without Ralph Nader, we would've won Florida," she pointed out.

The third-party candidate most likely to influence the party balance in the Senate is Greg Orman, the independent candidate in Kansas running against Republican Sen. Pat Roberts. That race is something of an anomaly, since the Democratic candidate dropped out all together. Had Democrat Chad Taylor stayed in the race, he and Orman would have split the opposition vote against Roberts, handing the Republican senator another term. Now, however, the race is effectively a toss-up. Orman has yet to say which party he would caucus with should he win.

While third-party candidates are unlikely to win in other races, Democrats and Republicans haven't ignored their influence.

Meanwhile, in Alaska, Democratic Sen. Mark Begich's campaign is running radio ads to give a boost to Libertarian candidate Mark Fish, the Alaska Dispatch News reports -- while Fish hasn't even spent any of his own campaign money on advertising.

In addition to running ads for the Libertarian -- who will presumably take votes away from Begich's Republican challenger Dan Sullivan -- Begich has fought for Fish's inclusion in debates. "He likes my positions so well, I'm looking forward to an endorsement," Fish joked to the Dispatch.

Begich has reason to believe Fish could hand him another term -- in 2008, he defeated Republican Sen. Ted Stevens by fewer than 4,000 votes after Stevens lost some support to third-party candidates.

In some races, third party candidates have garnered a decent level of support in polls. For instance, in Florida's gubernatorial race -- one of the nastier races of the season -- Libertarian candidate Adrian Wyllie has won as much as 10 percent support in polls.

However, Skelley said, "The third-party candidate almost never gets what they're averaging in the polls."

Why not? Basically, people are afraid of wasting their vote, both Skelley and Kamarck said.

In practical terms, she said, that means that "there's a huge vote of independent Republicans and independent Democrats. There are, in fact, very few pure independents, and they tend not to vote."

Because of the nation's winner-take-all elections for the House, Senate and the electoral college, supporting a third-party candidate doesn't pay off the way it would in another form of government, such as a parliamentary system.

Here's a look at a few more races with potentially influential third-party candidates:

North Carolina Senate: Polls show a close race between Democratic Sen. Kay Hagan and her Republican challenger, North Carolina House Speaker Thom Tillis. The race has become one of the most expensive of the year, with outside groups pouring money into it. Still, the outcome could be thrown by quirky the libertarian candidate, pizza delivery man Sean Haugh.

Louisiana Senate: In Louisiana, should no candidate win at least half the vote, there will be a runoff on December 6. Rather than holding primary elections, the state puts every candidate on the ballot on Election Day. Democratic Sen. Mary Landrieu's main challenger is Republican Rep. Bill Cassidy, but tea party Republican Rep. Rob Maness is garnering enough support to potentially trigger a runoff.

Georgia Gubernatorial: As in the Georgia and Louisiana Senate races, Georgia's race for the governor's office could come down to a runoff if no candidate wins 50 percent support. The runoff would be held on Dec. 2. Republican Gov. Nathan Deal is in a tight race against Democrat Jason Carter, the grandson of former President Jimmy Carter. The candidates are losing a few percentage points to Libertarian candidate Andrew Hunt.