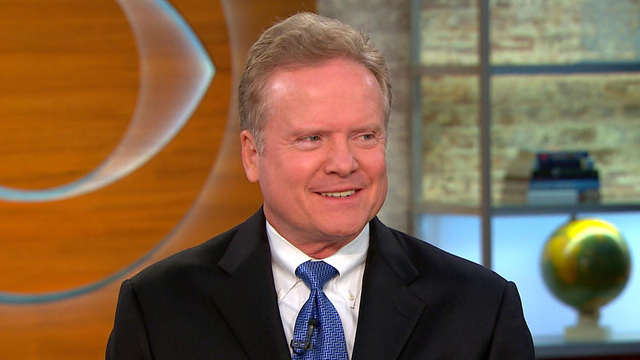 Democratic presidential candidate and former Virginia Sen. Jim Webb said Thursday that the Confederate flag at the South Carolina Capitol has "long been due to come down," but he also called for some historical perspective on the issue, suggesting people should not use the debate over the flag to demonize the South.

"The Confederate battle flag was a battle flag. It assumed a lot of unfortunate racist and divisionist overtones during the civil rights era," Webb said in an interview on "CBS This Morning," his first with a national broadcast outlet since announcing his candidacy earlier this month. "At the same time, I've been trying to reinforce that we need to remember two other parts of our history here. One is the very complex history of the Civil War itself."

The debate over the Confederate flag in public spaces has been simmering for decades, but it was reignited last month after the massacre of nine people at an historic African-American church in Charleston. The suspect in the shooting, Dylann Roof, had apparent ties to white supremacist organizations.

Despite his call Thursday for the flag at the South Carolina Statehouse to come down, Webb's first statement in the wake of the shooting did not take a clear position on whether the flag should stay put.

"This is an emotional time, and we all need to think through these issues with a care that recognizes the need for change but also respects the complicated history of the Civil War," Webb wrote on Facebook on June 24. "The Confederate Battle Flag has wrongly been used for racist and other purposes in recent decades. It should not be used in any way as a political symbol that divides us. But we should also remember that honorable Americans fought on both sides in the Civil War."

On Thursday, Webb said, "I did say that it did not belong in public places, but [my concern] was that this would go beyond the issues of harmony and unity that we want to keep on the table and into issues that again divide us. I think we've seen a great sense of growth of unity in the American South since the civil rights era. The South has never been white against black per se. It's always been a small veneer manipulating the emotions of white and black for all these other reasons. We need to look at jobs, we need to look at education, we need to look at harmony and bringing people together, and that's what I hope we don't lose with this."

South Carolina lawmakers voted early Thursday to remove the banner from the grounds of the legislature.

Webb, whose candidacy is considered a long shot, also discussed his campaign's finances, explaining why his bid isn't supported by any super PACs that can solicit unlimited donations.

"People can give us $2,700, or they can contribute to a PAC of $5,000, but with these super PACs you can come in and write a $27 million check," he said. "And my point has been if that ethically bothers you, then don't do it. Just say you won't directly participate. A lot of these other candidates have actually directly participated in this action that I think goes against the grain of what we are as a democracy."

Asked for his main argument against the nomination of Hillary Clinton, the clear front-runner in the Democratic race, Webb demurred.

"I don't have a main argument against anyone who is running," he said. "I think we all should put our issues on the table and let the American people decide."

He declined to directly criticize Clinton's tenure as secretary of state, but he did suggest American foreign policy has been adrift for decades.

"I believe that since the end of the Cold War and particularly since 9/11, we have had a foreign policy that's been based on situational ethics," he said.

Webb also sounded a skeptical note when he was asked about nuclear negotiations with Iran, which could lift sanctions on the Iranian economy in exchange for limits on Iran's nuclear energy program and inspections to ensure the Iranians are not building a nuclear bomb.

"I'm very concerned about any agreement that would acquiesce to the idea that Iran would eventually acquire nuclear weapons," he said. "We want better relations with Iran. I've said that many times over the years, but since the fallout of the Iraq War and then the Arab Spring, Iran has been much more active in this region, and we don't want to send the wrong signals to our allies and others in the region that we are acquiescing to the greater power that Iran has. So I don't see that there's a hurry here with respect to the agreement with Iran."