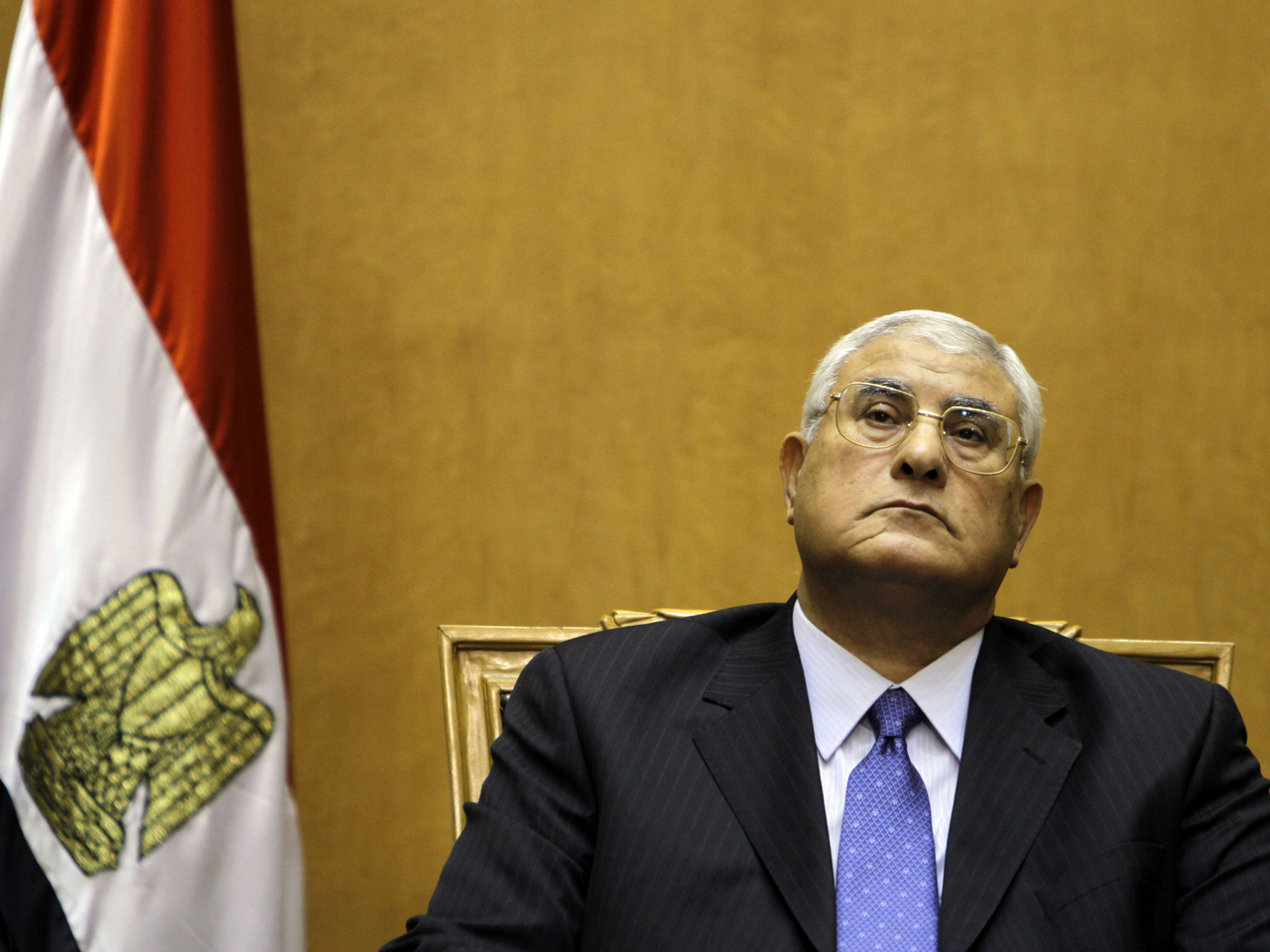 CAIRO The supreme justice of Egypt's Supreme Constitutional Court has been sworn in as the nation's interim president, replacing the Islamist Mohammed Morsi who was ousted by the military.

Adly Mansour was sworn in Thursday at the Constitutional Court in a ceremony broadcast live on state television.

According to military decree, Mansour will serve as Egypt's interim leader until a new president is elected. A date for that vote has yet to be set.

Manosur's assumption of office comes a day after the military deposed Morsi, who took office a year ago as Egypt's first democratically elected president.

The military moved to oust Morsi after millions of Egyptians took to the streets this week to demand his resignation. On Thursday, as Mansour was sworn in, CBS News correspondent Clarissa Ward reported that people had again gathered in Tahrir Square to celebrate what they view as the triumph of the will of the people. They were fed up with President Morsi, accusing him of destroying the country's economy and stacking its government with his Islamist colleagues from the Muslim Brotherhood.

Upon being sworn in, Mansour told the nation on live television that he considered it an honor "to receive order to be interim president of government and it was given to me by the one who has the order -- the Egyptian people, source of all powers following 30th of June revolution," which the anti-Morsi forces have dubbed the Islamist president's ouster.

Mansour claimed the new "revolution" had "corrected" the one born of the Arab Spring just two years earlier -- the one which led to the nation's first democratic elections in decades and which brought Morsi to power.

Morsi was under house arrest Thursday at an undisclosed location, and officials said the Muslim Brotherhood's leader, Mohammed Badie, had also been taken into custody.

"I don't think anyone here wants the army to come back and govern the country," a man on a street told CBS News on Wednesday. "So I think all the cheering and all the excitement is because it's seem like the army is saying to the people "we're with you, we're protecting you and we realize how serious this is."

Reporting from Cairo, Ward said the people on the streets didn't have one leader in mind who should take over, suggesting that was a problem for another day.

Fearing a violent reaction by Morsi's Islamist supporters, troops and armored vehicles deployed in the streets of Cairo and elsewhere, surrounding Islamist rallies. Clashes erupted in several provincial cities when Islamists opened fire on police, with at least nine people killed, security officials said. Some reports put the number as high as 32.

The army took control of state media and blacked out TV stations operated by the Muslim Brotherhood. The head of the Brotherhood's political wing was arrested.

"Of course we're under attack," Haddad told Ward. "They're trying to dismantle the Brotherhood machine and the Brotherhood organization and apparently for fear that if they hold another election, we might show up for it and we might win it again."

The ouster of Morsi throws Egypt on an uncertain course, with a danger of further confrontation. It came after four days of mass demonstrations even larger than those of the 2011 Arab Spring that toppled longtime autocrat Hosni Mubarak.

Egyptians were angered that Morsi was giving too much power to his Muslim Brotherhood and other Islamists and had failed to tackle the country's mounting economic woes.

Beyond the fears over violence, some protesters are concerned whether an army-installed administration can lead to real democracy.

President Obama urged the military to hand back control to a democratic, civilian government as soon as possible but stopped short of calling it a coup d'etat.

The U.S. wasn't taking sides in the conflict, committing itself only to democracy and respect for the rule of law, Mr. Obama said.

The National Security Council said Thursday President Obama met with his national security team in the Situation Room and reached out to leaders in Egypt and Israel to convey the importance of a quick, transparent and responsible return to a democratically-elected government.

On Monday, army chief Gen. Abdel-Fattah el-Sissi had given Morsi an ultimatum to find a solution to meet the demands of anti-government demonstrators in 48 hours, but the 62-year-old former engineer defiantly insisted on his legitimacy from an election he won with 51.7 percent of the vote in June 2012.

As the deadline approached, el-Sissi met with pro-reform leader Mohammed ElBaradei, top Muslim cleric Sheik Ahmed el-Tayeb and Coptic Pope Tawadros II, as well as opposition activists and some members of the ultraconservative Salafist movements. The consultations apparently were aimed at bringing as wide a consensus as possible behind the army's moves.

The Brotherhood boycotted the session, according to its political arm, the Freedom and Justice Party.

After the deadline expired, el-Sissi went on state TV and said the chief justice of the Supreme Constitutional Court, Adly Mansour, would step in as interim president until new elections are held. Mansour was appointed to the court by Mubarak but elevated to the chief justice post by Morsi.

Flanked by Muslim and Christian clerics as well as ElBaradei and two opposition activists, el-Sissi said in his Wednesday night address that a government of technocrats would be formed with "full powers" to run the country.

He promised "not to exclude anyone or any movement" from further steps. But he did not define the length of the transition period or when presidential elections would be held. He also did not mention any role for the military.

The constitution, drafted by Morsi's Islamist allies, was "temporarily suspended," and a panel of experts and representatives of all political movements would consider amendments, el-Sissi said. He did not say whether a referendum would be held to ratify the changes, as is customary.

ElBaradei, a Nobel Peace Prize laureate and the former head of the U.N. nuclear watchdog agency, said he hoped the military plan would be "the beginning of a new launch for the Jan. 25 revolution when people offered their dearest to restore their freedom, dignity and social justice for every Egyptian."

Also appearing with el-Sissi was Mahmoud Badr, one of two representatives of Tamarod, or Rebel -- the youth opposition movement that engineered the latest wave of protests. He urged protesters "to stay in the squares to protect what we have won."

After the speech, fireworks burst over crowds dancing and waving flags in Cairo's Tahrir Square, epicenter of the 2011 uprising. Now it was one of multiple centers of a stunning four-day anti-Morsi revolt that brought out the biggest anti-government rallies Egypt has seen.

A statement from Morsi's office's Twitter account quoted Morsi as saying the military's measures "represent a full coup categorically rejected by all the free men of our nation."

The army insisted it is not carrying out a coup, but acting on the will of the people to clear the way for a new leadership. El-Sissi warned that the armed forces and police will deal "decisively" with violence.

Some of Morsi's Islamist backers, tens of thousands of whom took to the streets in recent days, have vowed to fight to the end, although he urged everyone "to adhere to peacefulness and avoid shedding blood of fellow countrymen."

"Down with the rule of the military!" some of them chanted after el-Sissi's speech, reviving a chant used by leftist revolutionaries during the nearly 17 months of direct military rule that followed Mubarak's removal.

El-Sissi warned that the armed forces and police will deal "decisively" with violence.

The army deployed troops, commandos and armored vehicles around the country. In Cairo, they were stationed on bridges over the Nile and at major intersections. They also surrounded rallies being held by Morsi's supporters -- an apparent move to contain them.

After the military's 9:20 p.m. announcement, the Brotherhood's TV station went black. Islamist TV networks that have been accused of inciting violence also went off the air, and some of their prominent anchors have been arrested, according to security officials speaking on condition of anonymity because they were not authorized to speak to the media.

Security forces stormed the studio of Al-Jazeera Misr Mubasher and detained the staffers. The station, a branch of Qatari-run Al-Jazeera TV, has maintained a generally pro-Morsi line.

Travel bans were imposed on Morsi and top figures from the Muslim Brotherhood, including its chief, Mohammed Badie, and his powerful deputy, Khairat el-Shater. Officials said security forces had surrounded Badie inside a tourist compound where he had been staying in the Mediterranean coastal city of Marsa Matrouh, near the Libyan border.

A security official said Saad el-Katatni, the head of the Freedom and Justice Party, and Rashad Bayoumi, one of two deputies of the Brotherhood's top leader, were arrested early Thursday. The official spoke on condition of anonymity because he was not authorized to talk to the press.

El-Haddad, the Brotherhood party's spokesman, said a list has been drawn up of hundreds of Brotherhood members believed wanted for arrest, including himself.

"We don't know the details. The army is not giving details," he told The Associated Press. "It is a full-fledged coup and it is turning into a bloody one, too. They are arresting everybody."

Police shot dead six Islamists who opened fire on Marsa Matrouh's police headquarters as they drove past. Morsi supporters tried to storm a police station in the southern city of Minya, but where battled back by police, killing three, while other Islamists destroyed cars and shops and threw stones at a church in the nearby city of Deir Mawas, while police fired tear gas at them. Police and armed Morsi supporters also battled in the southern city of Assiut, another Islamist stronghold.

Nearly 50 people have been killed in clashes between Morsi supporters and opponents since Sunday.

Morsi took office vowing to move beyond his roots in the Muslim Brotherhood, but his presidency threw the country into deep polarization. Those who took to the streets this week say he lost his electoral legitimacy because he tried to give the Brotherhood and Islamist allies a monopoly on power, pushed through a constitution largely written by his allies and mismanaged the country's multiple crises.

Morsi and his allies say the opposition never accepted their appeals for dialogue -- seen by opponents as empty gestures -- and that Mubarak loyalists throughout the government sabotaged their attempts to bring change.

A major question now is whether the Brotherhood and other Islamists will push back against the new, military-installed system, or can be drawn into it.