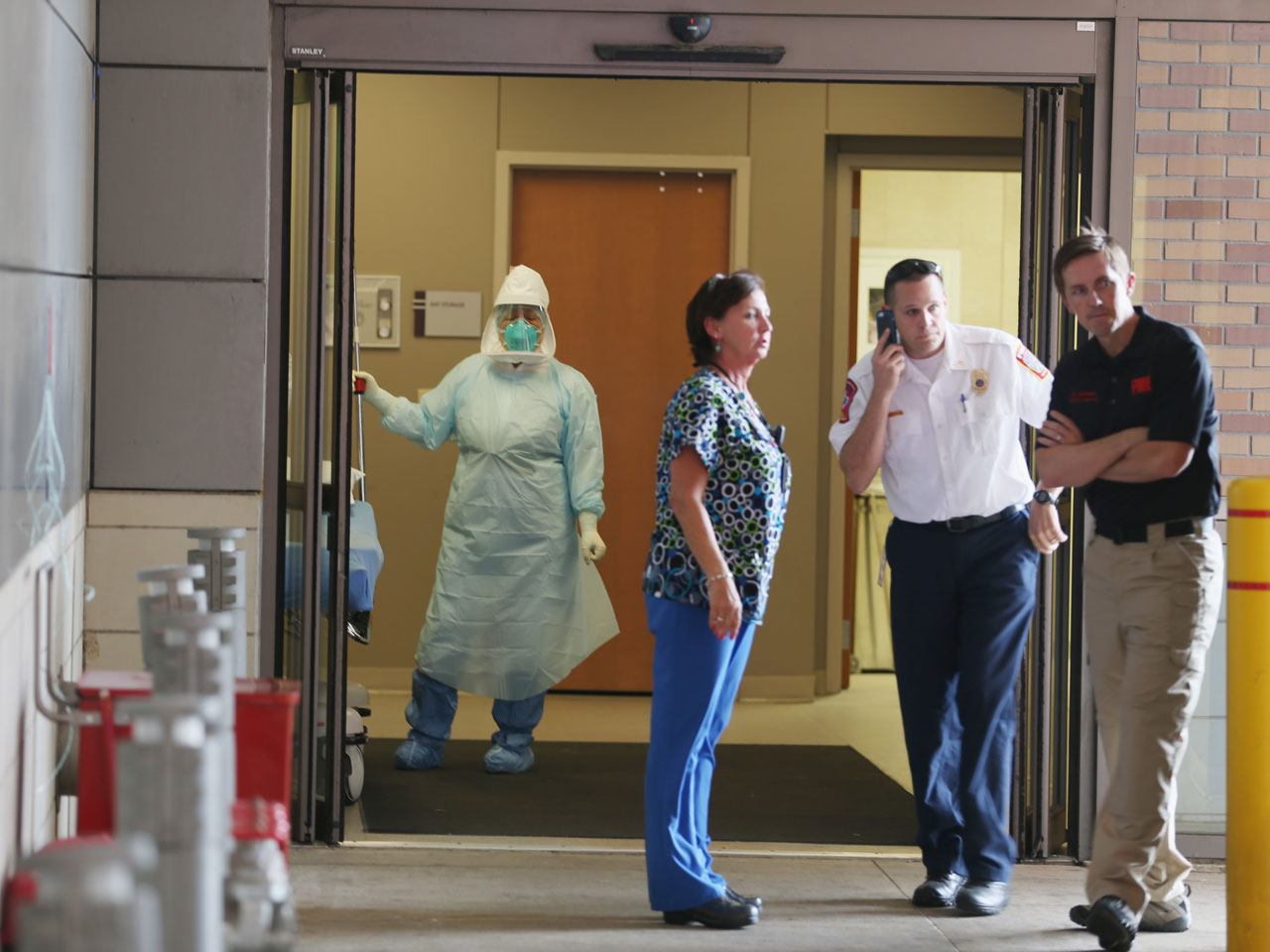 DALLAS - They drew his blood, put tubes down his throat and wiped up his diarrhea. They analyzed his urine and wiped saliva from his lips, even after he had lost consciousness.

The CDC announced Tuesday that 76 staff members at Texas Health Presbyterian Hospital were involved in the care of Thomas Eric Duncan after he was hospitalized, including a nurse now being treated for the same Ebola virus that killed the Liberian man who was visiting Dallas.

The size of the medical team reflects the hospital's intense effort to save Duncan's life, but it also suggests that many other people could have been exposed to the virus during Duncan's time in an isolation unit.

On Tuesday, Dr. Tom Frieden, the director of the Centers for Disease Control and Prevention said the infection of the nurse meant the agency had to broaden the pool of people getting close monitoring. Authorities have said they do not know how 26-year-old nurse Nina Pham was infected, but they suspect some kind of breach in the hospital's protocol.

Frieden said as a result of the current situation, the CDC was setting up an Ebola response team for hospitals with Ebola patients, and has vowed to put a team on the ground anywhere in the United States "within hours."

In a statement released Monday by the hospital, Pham said: "I'm doing well and want to thank everyone for their kind wishes and prayers. I am blessed by the support of family and friends and am blessed to be cared for by the best team of doctors and nurses in the world here at Texas Health Presbyterian Hospital Dallas."

The hospital held several town hall meetings for employees Monday amid concerns about the "breach in protocol" that health officials said had lead to Pham becoming infected, CBS Dallas reported.

The medical records given to the AP offer clues, both to what happened and who was involved, but the hospital said the CDC does not have them.

A CDC spokeswoman said the agency reviewed the medical records with Duncan's care team and concluded that the documents were not helpful in identifying those who interacted directly with the patient.

"This is not something we can afford to experiment with. We need to get this right," said Ruth McDermott-Levy, who directs the Center for Global and Public Health in Villanova University's College of Nursing.

Medical records provided by Duncan's family indicated Pham, the infected nurse, had daily contact with Duncan. However, many of her coworkers have praised Pham for being fastidious in the use of her protective gear, and with other hygienic measures.

Until now, the CDC has been actively monitoring 48 people who might have had contact with Duncan after he fell ill with an infection but before he was put in isolation. The number included 10 people known to have contact and 38 who may have had contact, including people he was staying with and health care professionals who attended to him during an emergency room visit from which he was sent home. None is sick.

Frieden said Tuesday contacts of Duncan have passed through the highest risk period of quarantine and are now unlikely to develop symptoms.

"If this one individual was infected - and we don't know how - within the isolation unit, then it is possible that other individuals could have been infected as well," said Dr. Tom Frieden, director of the CDC. "We do not today have a number of such exposed people or potentially exposed health care workers. It's a relatively large number, we think in the end."

Caregivers who began treating Duncan after he tested positive for Ebola were following a "self-monitoring regimen" in which they were instructed to take their temperatures regularly and report any symptoms. But they were not considered at high risk. Pham went to the hospital Friday night after she took her temperature and found she had a fever.

Typically, the nurses, doctors and technicians caring for a contagious patient in isolation would be treating other people as well, and going home to their families after decontaminating themselves. The hospital has refused to answer questions about their specific duties.

The 1,400-plus pages of medical records show that nurses, doctors and other hospital employees wore face shields, double gowns, protective footwear and even hazmat suits to avoid touching any of Duncan's bodily fluids. Ebola spreads through direct contact with those fluids, usually blood, feces and vomit. The virus has also been detected in urine, semen and breast milk, and it may be in saliva and tears.

CDC officials said there were chinks in that protection at Texas Presbyterian, but they have not identified them and are investigating.

Another nurse noted that Duncan's urine was "darker in color with noted blood streaks."

It was unclear from the records released to the AP how many of the approximately 70 individuals involved in Duncan's care had direct contact with his body or fluids.

Dr. Aileen Marty, a World Health Organization doctor who recently returned to Florida International University after a month fighting Ebola in Nigeria, said no amount of protection is going to help if hospital workers do not put on and take off their protective layers carefully.

"The first thing in caring for someone with Ebola is to do everything in your power to never become a victim," she said.

And tracking all contacts, even within the medical setting, is complicated.

Generally, the first step in locating care providers for isolated infected patients is a personnel log on the door, "that should have everyone going in and out, signing in and out," said Dr. Lisa Esolen, Geisinger Health System's Medical Director of Health Services and Infection Prevention and Control. Medical records indicate the Dallas hospital had a log.

On the day before Duncan died, records indicate that at least nine caregivers entered and exited the room.

A spokesman for Texas Health Resources, the hospital's parent company, said the CDC probably has a log from the room door that would list everyone who got close to Duncan.

Dr. Christopher Ohl, who heads Wake Forest Baptist Medical Center's infectious-disease department and has worked with the CDC in the past, said the expanding monitoring "is an abundance of caution that's probably beyond what needs to be done" because medical caregivers will notice if they're getting a fever, and they're not contagious until that point.

"You start to know when you get those body aches and headaches, most people know that," he said. "It's not like you're surprised by it. Most people can figure out what to do when that happens."

CDC chief Tom Frieden said Monday that the complication of Pham getting infected means America must "rethink" the way it addresses the disease.

Frieden said he is urging all hospitals to "think Ebola" in patients with symptoms and Africa travel. He also promised the CDC would "double down" on training and assistance throughout the country's health care system.