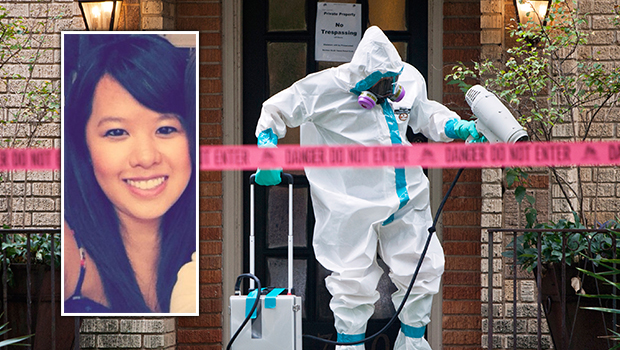 DALLAS -- The Texas nurse who contracted Ebola while caring for a dying Liberian man repeatedly visited his room from the day he was admitted to the intensive care unit until the day before he died, medical records show.

Nurse Nina Pham and other health care workers wore protective gear, including gowns, gloves, masks and face shields -- and sometimes full-body suits -- when caring for Thomas Eric Duncan, but the 26-year-old Pham became the first person to contract the disease within the U.S.

Federal health officials on Monday urged U.S. hospitals to "think Ebola" and launched a review of procedures for treating infected patients, while the World Health Organization called the outbreak "the most severe, acute health emergency seen in modern times." Ebola has killed more than 4,000 people, mostly in the West African countries of Liberia, Sierra Leone and Guinea, according to World Health Organization figures published last week.

Pham was among about 70 Texas Presbyterian hospital staffers who were involved in Duncan's care after he was hospitalized, according to the records. They drew his blood, put tubes down his throat and wiped up his diarrhea. They analyzed his urine and wiped saliva from his lips, even after he had lost consciousness.

The hospital held several town hall meetings for employees Monday amid concerns about the "breach in protocol" that health officials said had lead to Pham becoming infected, CBS Dallas reported.

The Texas Christian University nursing school graduate was monitoring her own temperature and went to the hospital Friday night as soon as she discovered she was running a low fever. She is in isolation and in stable condition, health officials said.

CBS Dallas reported Pham received a transfusion of plasma from Kent Brantly, a Texas doctor who survived the virus, according to her pastor and the nonprofit medical mission group Samaritan's Purse. Brantly, an aid worker in Liberia, was flown back to the U.S. and treated with the experimental drug ZMapp at Emory University Hospital in Atlanta.

Brantly has also donated blood to American freelance journalist Ashoka Mukpo, who is currently being treated for Ebola at the Nebraska Medical Center. Another American doctor who contracted Ebola in Liberia, Phil Sacra, received two blood transfusions from Brantly as part of his treatment.

Also Monday, a Louisiana judge issued a temporary restraining order preventing incinerated material from the apartment where Duncan was staying to enter the state for disposal. Louisiana's attorney general had argued the ashes might pose a public health risk.

Public health authorities have intensified their monitoring of other Dallas hospital workers who cared for Duncan in the wake of Pham's diagnosis.

Centers for Disease Control and Prevention Director Tom Frieden said he would not be surprised if another hospital worker who cared for Duncan becomes ill because Ebola patients become more contagious as the disease progresses.

Pham's name appears frequently throughout the hundreds of pages of documents in Duncan's medical records, provided to the Associated Press by his family. They show she was in his room Oct. 13, the day before he died.

Progress reports note he had loose, watery stool and nurses had difficulty inserting a needle at one point. Pham's notes also describe nurses going in and out of Duncan's room wearing protective gear to treat him and to mop the floor with bleach.

She also notes how she and other nurses were ensuring Duncan's "privacy and comfort," and providing "emotional support."

Frieden has said a breach of protocol led to the nurse's infection, but officials are not sure what went wrong. Pham has not been able to point to any specific breach.

The CDC now is monitoring all hospital workers who treated Duncan and planned to "double down" on training and outreach on how to safely treat Ebola patients, Frieden said.

When asked how many health care workers are being checked, Frieden said officials "don't have a number."

Health officials have relied on a "self-monitoring" system when it comes to U.S. health care workers who care for isolated Ebola patients and wear recommended protective equipment. They expect workers to report any potential exposures to the virus and watch themselves for symptoms.

Besides the workers, health officials continue to track 48 people who were in contact before Duncan was admitted to the hospital and placed in isolation. They are monitoring one person the nurse was in contact with while she was in an infectious state.

None has exhibited symptoms, Frieden said.

The case involving Pham raised questions about assurances by American health officials that the disease will be contained and that any U.S. hospital should be able to treat it.

Dr. Anthony Fauci, director of the National Institute of Allergy and Infectious Diseases was asked on ABC's "Good Morning America" if federal health authorities should consider requiring that Ebola patients be sent only to highly specialized "containment" hospitals.

"That is something that should be seriously considered," Fauci said.

Duncan, who arrived in the U.S. from Liberia Sept. 20, first sought medical care for fever and abdominal pain Sept. 25. He told a nurse he had traveled from Africa, but he was sent home. He returned Sept. 28 and was placed in isolation because of suspected Ebola.

Among the things the CDC will investigate is how the workers took off protective gear, because removing it incorrectly can lead to contamination. Investigators will also look at dialysis and intubation - the insertion of a breathing tube in a patient's airway. Both procedures have the potential to spread the virus.

Fauci said on CNN that the CDC is examining procedures like dialysis to see if they "heighten greatly" the risk of health care workers contracting Ebola. He suggested that in cases where the patient has deteriorated to the point where he or she cannot be saved, such high-risk procedures should not be done.

Every emergency room needs to be prepared to take action because no one can control where an Ebola patient might show up, said Dr. Dennis Maki, University of Wisconsin-Madison infectious disease specialist and former head of hospital infection control.

However, only large hospitals such as those affiliated with major universities truly have the equipment and manpower to deal with Ebola correctly, Maki said.

Health care workers treating Ebola patients are among the most vulnerable, even when wearing protective gear.

More than 370 health care workers in West Africa have fallen ill or died since the epidemic began earlier this year.

Officials said there was a dog in the Texas nurse's apartment that has been removed to an undisclosed location for monitoring and care. They do not believe the pet shows any signs of Ebola. A dog belonging to an infected Spanish nurse was euthanized, drawing thousands of complaints.

The Ebola virus spreads through close contact with a symptomatic person's bodily fluids, such as blood, sweat, vomit, feces, urine, saliva or semen.