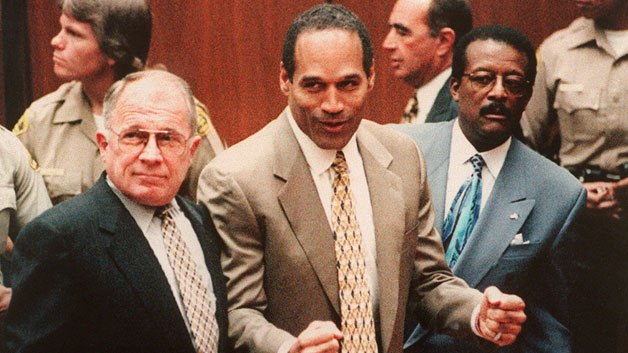 The knife was supposedly found by a construction worker and turned over to a now-retired police motorcycle officer working as a filming location security guard nearby, LAPD Capt. Andy Neiman said Friday. Attorney F. Lee Bailey, who was among the lawyers who represented Simpson after the NFL star was accused in 1994 of killing Nicole Brown Simpson and Ronald Goldman, cautioned against jumping to conclusions about the knife.

"People are all excited because they would like to relate the knife to the case. Frankly, it wouldn't have any legal consequences if it were tied in, but I have grave doubts that it can be," F. Lee Bailey told CBS Boston.

"I don't find this exciting at all," Bailey told the station. "I was in charge of the prep of the case and we scoured those premises and a construction worker that says he happened upon a knife years ago had better start taking a polygraph test, same with the cop who says he got it from the guy."

Simpson lived in a mansion on Rockingham Avenue in Brentwood when Nicole Brown Simpson and Goldman were killed. Simpson's home was demolished in 1998, the Chicago Tribune reported.

Simpson was charged in their murders, but found not guilty on Oct. 3, 1995. Police have long searched for the weapon used in the murders.

On Friday, Neiman stressed that the authenticity of the story was not confirmed.

Police were told that after the off-duty officer was given the knife, he kept it for years. In January, the officer apparently told a friend in the LAPD's elite Robbery Homicide Division about the knife. Neiman said the police department is testing the knife and only became aware of it within the last month. He said the officer told the department he didn't turn the knife over because he thought the case was closed, but Neiman stressed that murder cases remain open if there is no conviction.

Neiman said the officer retired in the late 1990s.

Bailey alleged the knife could have been planted. During Simpson's 1995 criminal case, dubbed "The Trial of the Century," the defense team accused a police officer of planting a bloody glove on Simpson's property after the murders.

The knife is being tested to see if it has any evidentiary value, Neiman said. He said it will be examined for all forensic evidence including DNA, hair samples and serology.

The case is the subject of a television mini-series currently airing on the FX network.

Marcia Clark, who prosecuted Simpson's 1995 criminal case, told ET she "can't believe someone gave a police officer what appears to be, could be, important evidence in a case -- even if it is closed -- and takes it home."

"I don't know whether to say it is truly evidence, none of us knows that yet -- it might be a hoax, it might be somebody who planted it and then just pretended to find it and gave it to the off-duty police officer, you don't know," Clark said."But, of course, I'm glad the LAPD is taking it seriously and subjecting it to testing so we can find out."

She told ET the chances of the new revelation leading to any sort of prosecution are slim. Simpson likely cannot be retried for the murders, because of double jeopardy statutes, Neiman said Friday.