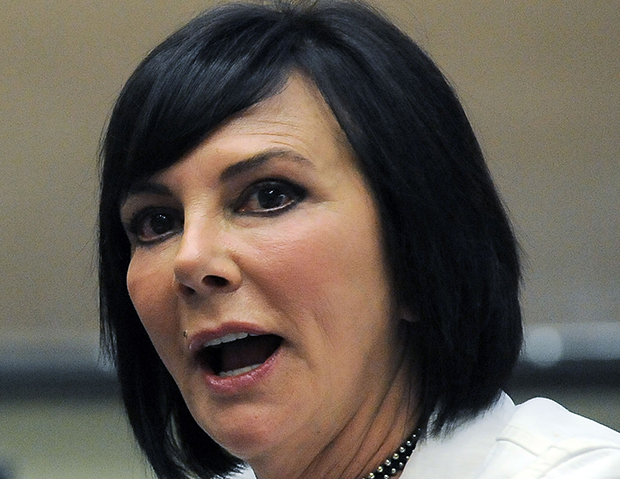 Former prosecutor Marcia Clark is opening up about the recent bombshell that Los Angeles police are currently investigating a knife that was allegedly recovered on property once owned by O.J. Simpson.

Of course, she still remains skeptical.

"I don't know whether to say it is truly evidence, none of us knows that yet -- it might be a hoax, it might be somebody who planted it and then just pretended to find it and gave it to the off-duty police officer, you don't know," Clark says. "But, of course, I'm glad the LAPD is taking it seriously and subjecting it to testing so we can find out."

Clark notes that DNA evidence could still be potentially recovered from the knife, if it is indeed not a hoax.

"It's very possible -- I mean they recover DNA on mummies in Egypt," Clark says. "It's entirely possible that if there is some DNA to be recovered that it could be found, especially with today's technology, which is much more sensitive."

"I think it's a remarkable development if it does turn out to be connected to the murders of Ron and Nicole," she adds. "It would be interesting if there was some evidence on that knife that pointed to who might have helped to bury it, if indeed someone else did."

Though Clark points out that the chances of this leading to any sort of prosecution is unlikely.

"The likelihood of any prosecution stemming from this evidence is very, very slim," she admits. "But we have to find out what this means -- what the truth of this is."

"I just hope the truth comes out about this situation, as I always do about all situations -- whatever this is, let's find out," she adds. "Let's find out if it's related or not. I really want to say -- my heart goes out to the families. With these kind of things that stir up all these memories and the pain of it all, I just can't imagine how they're feeling right now."

In a press conference on Friday morning, LAPD Capt. Andrew Neiman confirmed that the department is investigating the alleged discovery of a knife on the Rockingham property formerly owned by Simpson. He declined to name the retired officer involved in the discovery of the knife, although according to the Los Angeles Times, a construction worker found the knife years ago and turned it over to the police officer in question.

According to TMZ, the officer informed Robbery Homicide detectives of the knife's existence because he wanted to get it framed.

Clark, 62, was the head prosecutor during Simpson's trial, and ended up taking a leave of absence from her job after the former NFL star was acquitted of the murders of his ex-wife, Nicole Brown Simpson, and her friend Ron Goldman in 1995. Clark retired two years later, but went on to co-author a book about the case titled "Without a Doubt."

Simpson, 68, remains in a Nevada state prison after he was arrested in connection with a robbery at a Las Vegas hotel room in September 2007. He was found guilty on 12 counts, including kidnapping and armed robbery, in October 2008, and was later sentenced to 33 years in jail. Simpson is still eligible for parole in November of 2017 -- at the age of 70 -- his lawyer, Ozzie Fumo, tells ET, unless he receives a sentence reduction through other means.

On Friday, Neiman said that it is his understanding that could Simpson could not be retried on murder charges, as he was previously acquitted.

Last month, Clark exclusively opened up to ET about FX' hit series, "The People v. O.J. Simpson: American Crime Story," in which she's played by actress Sarah Paulson. Although she admitted watching the show was like "reliving a nightmare," Clark also gave credit to what she felt the series did right -- remembering the victims, Nicole and Ron.

"I think the series actually makes an effort to acknowledge them and the ways in which that they were forgotten," Clark said. "This is an important series that's beautifully done, very compelling and I can't thank Ryan Murphy enough for what he's done here in terms of raising these issues in a very serious and compelling and very substantive way."

"But at the end of the day, two people lost their lives in a brutal murder," she added. "So we have to remember that. We can't forget them again. Remember Ron and Nicole."