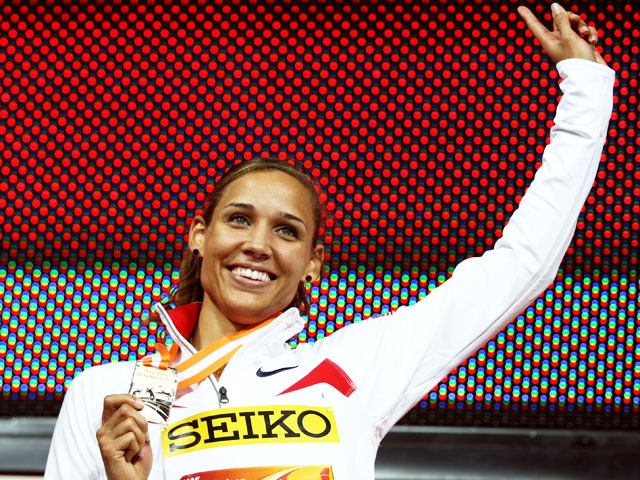 (CBS News) LONDON - Every Olympics has breakout stars, and this year, one of them may be Lolo Jones.

The American began her race for gold in the women's 100-meter hurdles Monday, a day after her 30th birthday.

She was fast enough to finish first in the qualifying race to move on to the next round.

But many observers say she's already ahead of the field - when it comes to media exposure.

Jones is a 21st century athlete who seems to be tweeting just about her every move to her nearly 250,000 followers. And her fans -- and the media -- can't seem to get enough.

The publicity surrounding her brand is everywhere, from Oakley and Procter & Gamble commercials to cover stories from Outside magazine, Time and Oxygen. They project an athlete poised for greatness at the London Games.

As a two-time world indoor champion, and the 60-meter American record holder, Jones has hurdled the competition since her days as an All-American at LSU.

And with all the media attention she's been receiving, you'd be forgiven for thinking she was favored to win the 100-meter hurdles. In fact, she's not.

Sports Illustrated's David Epstein said her appeal transcends the track. "Part of Lolo's allure is that she's physically beautiful and very open about her personal life. And I think people kind of find that both interesting and alluring," he explains.

This is Jones' second lap at the Olympic Games. In 2008, she surprised the track community by surging ahead in the 100-meter hurdles, only to trip on the second-to-last hurdle and watch her dreams of gold run by.

Jones picked herself up and, by the slimmest of margins, qualified for the 2012 Games.

Even though teammates Dawn Harper and Kellie Wells posted faster times at the U.S. trials, Jones continued to shine as the pre-Olympic media favorite.

"The U.S. team has the reigning Olympic champion, who is in the shadow of someone who barely made the U.S. team," Epstein pointed out. "So it throws into really stark relief this issue of athletic competence versus sort of having a push from your sponsors and being willing to pose in various ways."

After appearing in ESPN The Magazine in 2009, Jones was fast-tracked for media stardom.

She's been profiled by "Real Sports" on HBO, appeared on "The Tonight Show with Jay Leno" and posed for the paparazzi at numerous red carpet events.

All that has some media outlets, such as The New York Times, wondering if Jones deserves all the attention she receives both on and off the track.

This weekend, the newspaper wrote, "Essentially, Jones has decided she will be whatever anyone wants her to be -- vixen, virgin, victim -- to draw attention to herself and the many products she endorses."

For Jones, who grew up sometimes homeless with a single mother and a father in and out of jail, the skeptics can say what they will.

In many ways, she's already won. And she hopes to keep winning.

To see Bigad Shaban's report, click on the video in the player above.