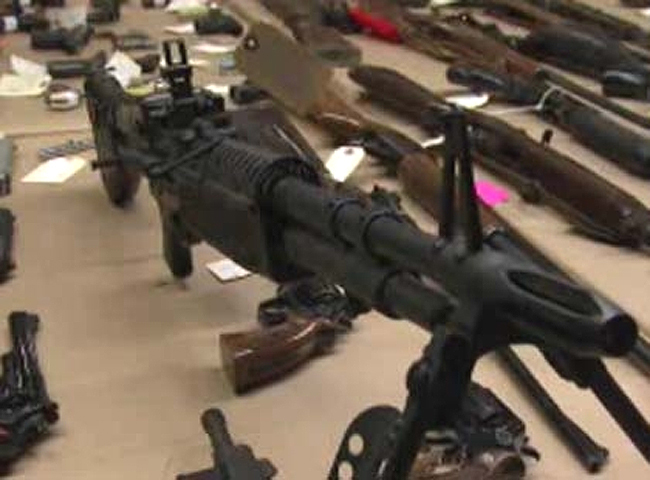 (CBS News) A handful of Democratic members of Congress this week are saying that it's time for Congress to stand up to the National Rifle Association and pass even the most marginal gun control policies.

Following the mass shooting in Aurora, Colo., the silence on the issue of gun control is "deafening," Sen. Frank Lautenberg, D-N.J., said Tuesday.

"We can't let the NRA stop us from common sense reforms anymore," he added. "We cannot let them co-opt the conscience of our country."

The shooting in Aurora, where 12 people were killed and 58 injured when a gunman opened fire in a crowded theater early Friday morning, is just the latest example of mass gun violence, Lautenberg said. He cited the infamous shootings at Columbine, Virginia Tech and Tucson.

In response to these tragedies, Lautenberg and a handful of other members of Congress are specifically calling for legislation to limit the availability of high-capacity ammunition clips.

One of the biggest proponents of the measure is Democratic Rep. Carolyn McCarthy of New York. McCarthy ran for Congress following the 1993 shooting of her husband and son on the Long Island Railroad. Her husband was killed in the attack.

"What happened on that train," McCarthy said today in reference to the Long Island Railroad shooting, "what has happened in all these mass killings -- there was one thing in common: there were the large magazine clips."

(Listen to McCarthy, at left, passionately respond to the critique from New Jersey Gov. Chris Christie that lawmakers shouldn't be "grandstanding" on gun control right now.)

"This was made to kill as many people as possible in the shortest period of time," McCarthy said of the high-capacity clips. She noted that 70 people were shot at the Aurora theater, even though the police responded to 911 calls in 90 seconds.

"All we're hearing from the NRA, that we're taking away their Second Amendment rights -- this has nothing to do with Second Amendment rights," she said. "I don't know and I don't understand why the NRA doesn't work with us... We do not have to have citizens armed to the teeth so they can go in and kill innocent people -- that's not freedom."

In spite of the limited focus of this legislative push, House Speaker John Boehner said today that the GOP-led House wouldn't consider any gun legislation in response to the Aurora shooting.

"We had a shooting by a deranged person in Colorado, and our hearts and souls go out to the victims and those who were killed and those who were injured and their families," Boehner told reporters. "The president has made clear that he's not going to use this horrific event to push for new guns laws. I agree."

President Obama has yet to directly address the issue of how Friday's tragedy should impact gun policy, and his Republican rival Mitt Romney has been relatively quiet on the issue as well. But on Sunday, White House officials suggested the president won't be proposing any policy changes at this point.

"The president's view is that we can take steps to keep guns out of the hands of people who should not have them under existing law. And that's his focus right now," White House spokesman Jay Carney said.

Lautenberg said that "there is almost a resignation to the futility of our mission," but he added that the president should at least "try to marshal opinion, support for getting rid of the devices that are harmful in our society."

Democratic Sen. Robert Menendez of New Jersey acknowledged the challenge of going up against the NRA, which he said is "acting with money, resources and want not, to oppose all reasonable gun legislation."

Still, he said that challenge can be overcome eventually, starting "when we create a national debate... and we raise the voices of Americans who in the midst of their daily challenges may not have been thinking about gun violence, but I think, may side with us."

The Aurora shooting has not only renewed conversation on Capitol Hill about gun control but also sparked louder opposition to the NRA's influence. Democratic Rep. Earl Blumenauer of Oregon on Monday took to the House floor to complain about the group and Congress' lack of action.

"I find it appalling that we as citizens have enabled Congress to act in a spineless fashion to be taken over in the area of gun safety by the NRA that we refuse to deal with something that has serious law enforcement implications," Blumenauer said. He added that the U.S. is "alone in the developed world at most at risk for random gun violence."

If 70 people were killed and wounded in any other fashion, the congressman said Congress would be compelled to act.

"If food safety, mine safety, or TSA fails, there would be calls for accountability," he said. "Sadly that's not what is happening as the nation recoils in anguish at another outbreak of gun violence."

The NRA has wielded significant influence over Congress due in part to its strict single-issue focus and the fervor of its backers. But some gun control advocates are arguing at a Washington event today that the group's power is overstated. One of those advocates, Mark Glaze of the group Mayors Against Illegal Guns, told GQ magazine that in the past four election cycles, "the NRA's real as opposed to perceived influence has been virtually nil. And we're going to get Democratic and Republican donors who care about [stopping gun violence] to ask the candidates what they're going to do about it."

Mayors Against Illegal Guns on Tuesday released the findings of a survey by GOP pollster Frank Luntz showing that NRA members and gun owners overwhelmingly support a variety of laws opposed by the NRA -- for instance, 71 percent support barring people on terror watch lists from buying guns.

Still, one unnamed Democratic congressional staffer said to GQ of the NRA, "We do absolutely anything they ask and we NEVER cross them... They've completely shut down the debate over gun control. It's really incredible."