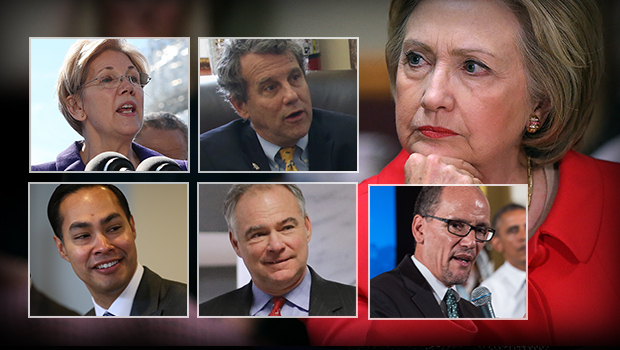 How much will Hillary Clinton's choice of a running mate affect the 2016 election? Not much, if history is any guide.

Aside from a few famous disasters and success stories, veeps tend to not matter all that much, come Election Day. Choosing Thomas Eagleton demolished whatever chance George McGovern had left in 1972. Lyndon Johnson gave Texas to Jack Kennedy in 1960. But these are the exceptions, and a cautious pol like Clinton can be expected to hew to a classic piece of wisdom while selecting her VP: "First, do no harm."

Up comfortably in the polls against an erratic Republican nominee who has yet to unite his party, Clinton seems likely to opt for a safe pick. All that could change, however, if Trump suddenly surges, or Clinton needs to lock down base voters after a bruising primary with Bernie Sanders. In that case, a riskier option might be tempting -- perhaps Elizabeth Warren -- which would present us with the first all-female ticket in American history.

Then again, Hail-Mary VP picks have a tendency to backfire: the relatively unknown and largely un-vetted Sarah Palin did more harm than good to John McCain, and Geraldine Ferraro proved to be an unwelcome distraction for Walter Mondale. So it's probably best for Clinton to play it safe and choose someone who's neither much of a liability nor all that exciting.

With that in mind, let's take a look at some of Clinton's best options, in no particular order.

The Ohio senator and liberal stalwart could help Clinton shore up support from the working-class voters she's had trouble holding on to this primary season. Labor loves him, he's skeptical of free trade (an issue that Donald Trump has exploited all year), and he might appeal to the lower-income white voters that Trump sees as his key to victory in November. Plus, he's relatively popular in his home state, and it's almost impossible to imagine a Trump victory if he can't capture Ohio. If he gives Clinton a two-point bounce there, that alone might be enough for the Democrats to hold onto the White House.

On the other hand, Brown insists he doesn't want the job and has the kind of big personality that might overshadow Clinton. Worse, though, is what would happen if he becomes vice president: Ohio's Republican governor, John Kasich, would pick his replacement, which could either help keep the GOP in control of the Senate or cut down a slim Democratic majority in 2017. And looking forward to 2018, when Democrats will be defending over 20 Senate seats compared to the Republicans' mere eight, one seat could mean the difference between a President Clinton having to deal with a Republican supermajority with the power to derail her agenda.

In a word, Virginia. For veepstakes, one thing a running mate might offer is help at the top of the ticket in a key swing state -- and Kaine, a former Virginia governor and relatively popular first-term senator, would do just that. His support for Clinton came early: as far back as 2014, Kaine was saying the former secretary of state should be the 45th president. He was involved in the pro-Clinton group Ready for Hillary, and has been hitting the trail for her since she became a candidate. For Clinton, this is about as safe a pick as she could find.

And as a former head of the Democratic National Committee, Kaine is used to being a national surrogate and attack dog. Also, with longtime friend-of-the-Clintons Terry McAuliffe in the governor's office in Virginia, replacing Kaine wouldn't be a concern. One interesting side note that could be a factor: Kaine is personally pro-life, a rarity among Democrats (he opposes overturning Roe v. Wade, though, so Clinton and Kaine wouldn't be on different sides of the issue politically).

At first glance, Labor Secretary Tom Perez seems like a dark horse in this race. He hails from safely Democratic Maryland and has little experience in elected office. But Perez has proven to be an energetic surrogate for Clinton and her campaign in recent months, endorsing her ahead of the Iowa caucuses and hitting the trail frequently.

Popular in progressive circles, he'd be a choice that might appeal to the legions of Sanders supporters Clinton's team wants to bring into the fold once the Democratic convention is over. Perez has specifically gone to Latino-heavy states on Clinton's behalf, like Nevada and Arizona, and he could be an effective bridge to Hispanic voters in a year when their turnout will be crucial to a Democratic path to victory.

This veep pick has attracted perhaps the most speculation -- certainly unique in that Clinton-Warren would be the first-ever all-female ticket. Though this one seems like a long shot, the most obvious draw of a Warren vice presidential bid is her progressive bona fides: after a competitive primary in which Bernie Sanders had more momentum than many expected, Warren would be by far the best choice to rally the progressive cause behind Clinton's campaign.

Warren has also proven herself on another key VP metric: her ability to go after the Republican nominee. Her recent tweet-storms against Trump show she's comfortable eviscerating him between now and November -- and Team Clinton will be looking for someone who can take over the attacks so Clinton can remain relatively above the fray.

But there are some big downsides, too. First of all, Warren still has not endorsed Clinton. She is one of only three Democratic senators who hasn't taken a side in the Democratic primary. For the Clintons, who place a premium on loyalty, that could be a big sticking point. And then there's the question of Warren's senate seat. As is the case with Brown in Ohio, Massachusetts' Republican governor, Charlie Baker, would get to appoint Warren's replacement.

Still, it benefits both Clinton and Warren camps to be seen as considering the prospect, which may be why neither side has shot it down so far.

A few months ago, Housing and Urban Development Secretary Julian Castro looked like the early front-runner for the VP nod. Now he's often left off lists like this one. The reason? Back in the fall, it looked to many as if the GOP would nominate a presidential candidate who could appeal to Hispanic voters -- namely Marco Rubio. Castro, the thinking went, could be helpful in that demo, and might blunt the impact of a Hispanic Republican nominee. Instead, the GOP went for Trump, a candidate who seems poised to pick up a historically low share of the Hispanic vote.

And when you put aside his Mexican heritage, the Harvard-educated Castro hasn't yet built the strongest resume for the job. He was mayor of San Antonio, Texas' second-largest city, which sounds impressive until you realize that the position is essentially ceremonial. San Antonio's city manager has just about all the executive power, leaving Castro with mostly on ribbon-cutting duty.

Castro was then named by Obama to be Housing and Urban Development secretary in 2014, putting him 12th in the line of succession but also saddling him with a federal bureaucracy that's not exactly seen as a model of efficiency.