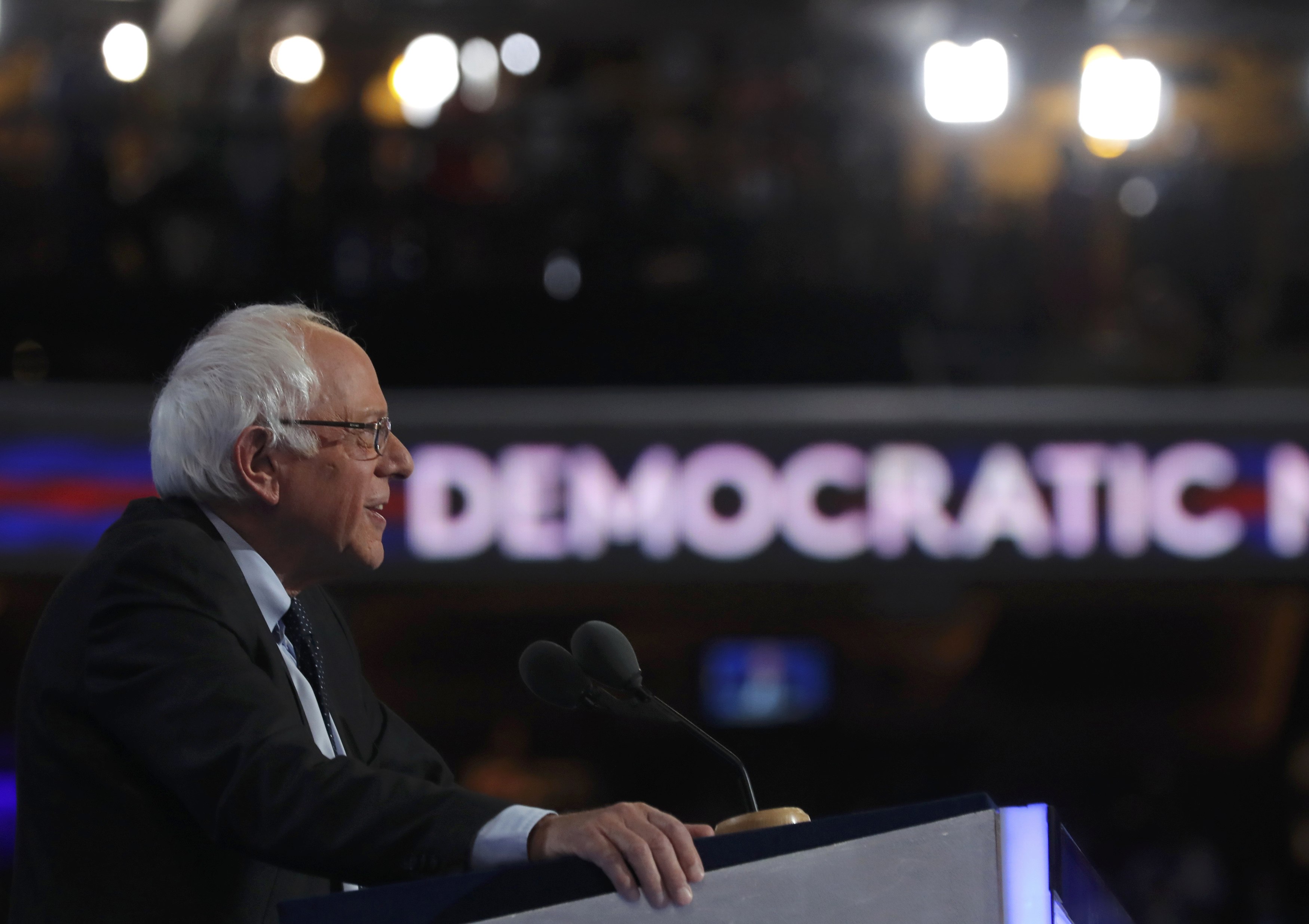 PHILADELPHIA -- Bernie Sanders took the stage at the Democratic convention Monday night after tensions among his supporters threatened to take the entire week off track, delivering a forceful speech aimed at bringing his backers into the fold for presumptive Democratic nominee Hillary Clinton.

"I understand that many people here in this convention hall and around the country are disappointed about the final results of the nominating process," he told delegates and supporters at the Wells Fargo Arena in Philadelphia. "I think it's fair to say that no one is more disappointed than I am. But to all of our supporters - here and around the country - I hope you take enormous pride in the historical accomplishments we have achieved."

After a week of Republican divisions in Cleveland, Democrats' four-day confab in Philadelphia was expected to be comparatively tame. However, with the leak of a trove of Democratic National Committee emails indicating the committee had been biased against Sanders' primary campaign--and the consequent ouster of chairwoman Debbie Wasserman Schultz--Sanders backers in Philadelphia were emboldened to further challenge the results of the Democratic primary.

But in his primetime speech Monday, Sanders said he would do "everything [he] can" to help elect Clinton and give her a Democratic Congress to work with--thus encouraging his supporters to do the same.

"Our job now is to see that platform implemented by a Democratic Senate, a Democratic House and a Hillary Clinton presidency - and I am going to do everything I can to make that happen," he said.

Monday began with Wasserman Schultz, a congresswoman from Florida, being booed out of the Florida Democrats' daily delegation breakfast in Philadelphia. And later that afternoon, Sanders supporters booed at multiple references to Clinton both inside and outside the convention hall--and thousands of his supporters gathered outside the security perimeter to protest on his behalf. One of those instances came when Sanders, addressing supporters earlier Monday, made reference to Clinton and her newly minted running mate Tim Kaine; Sanders did not mention Kaine at all in his speech Monday night.

In his speech to the convention Monday, Sanders acknowledged that he and Clinton have not always agreed on the issues that defined his campaign--but said that with his influence the Democratic platform is the "most progressive" in history.

"It is no secret that Hillary Clinton and I disagree on a number of issues. That's what this campaign has been about. That is what democracy is about," he said. "But I'm happy to tell you that at the Democratic Platform Committee there was a significant coming together between the two campaigns and we produced, by far, the most progressive platform in the history of the Democratic Party."

Sanders specifically praised the anti-Wall Street provisions in the newly passed platform, as well as the opposition to trade deals like the Trans-Pacific Partnership. Both were top priorities for Sanders and his campaign when it came to leaving the Vermont senator's mark on Democratic orthodoxy.

Sanders' place in primetime on the first night of the Democratic convention was a nod to the unexpected resonance his campaign had with the Democratic electorate. Once considered a long-shot candidate, Sanders won states and battled with Clinton through the final primaries in June.

In the opening of his speech, Sanders thanked his supporters for making those things happen, noting the accomplishments they made possible: from his 1,846 pledged delegates to his "hundreds of thousands" of volunteers to the 2.5 million people who donated to the effort.

"This election is about - and must be about - the needs of the American people and the kind of future we create for our children and grandchildren," he continued.

He encouraged his supporters to turn out, and to turn out for Clinton--a nod to the fears that Sanders supporters, many of whom are new to the political process, will opt to stay home entirely in November.

"If you don't believe this election is important, if you think you can sit it out, take a moment to think about the Supreme Court justices that Donald Trump would nominate and what that would mean to civil liberties, equal rights and the future of our country," he said.

He also called GOP nominee Donald Trump divisive, saying he will only further the polarization in an already divided country.

"In these stressful times for our country, this election must be about bringing our people together, not dividing us up. While Donald Trump is busy insulting one group after another, Hillary Clinton understands that our diversity is one of our greatest strengths."

Sanders noted he's known Clinton for decades, calling her a "fierce advocate" for children and said she will make an "outstanding" president.

"I have known Hillary Clinton for 25 years. I remember her as a great first lady who broke precedent in terms of the role that a first lady was supposed to play as she helped lead the fight for universal health care. I served with her in the United States Senate and know her as a fierce advocate for the rights of children."

He continued, "Hillary Clinton will make an outstanding president, and I am proud to stand with her here tonight."