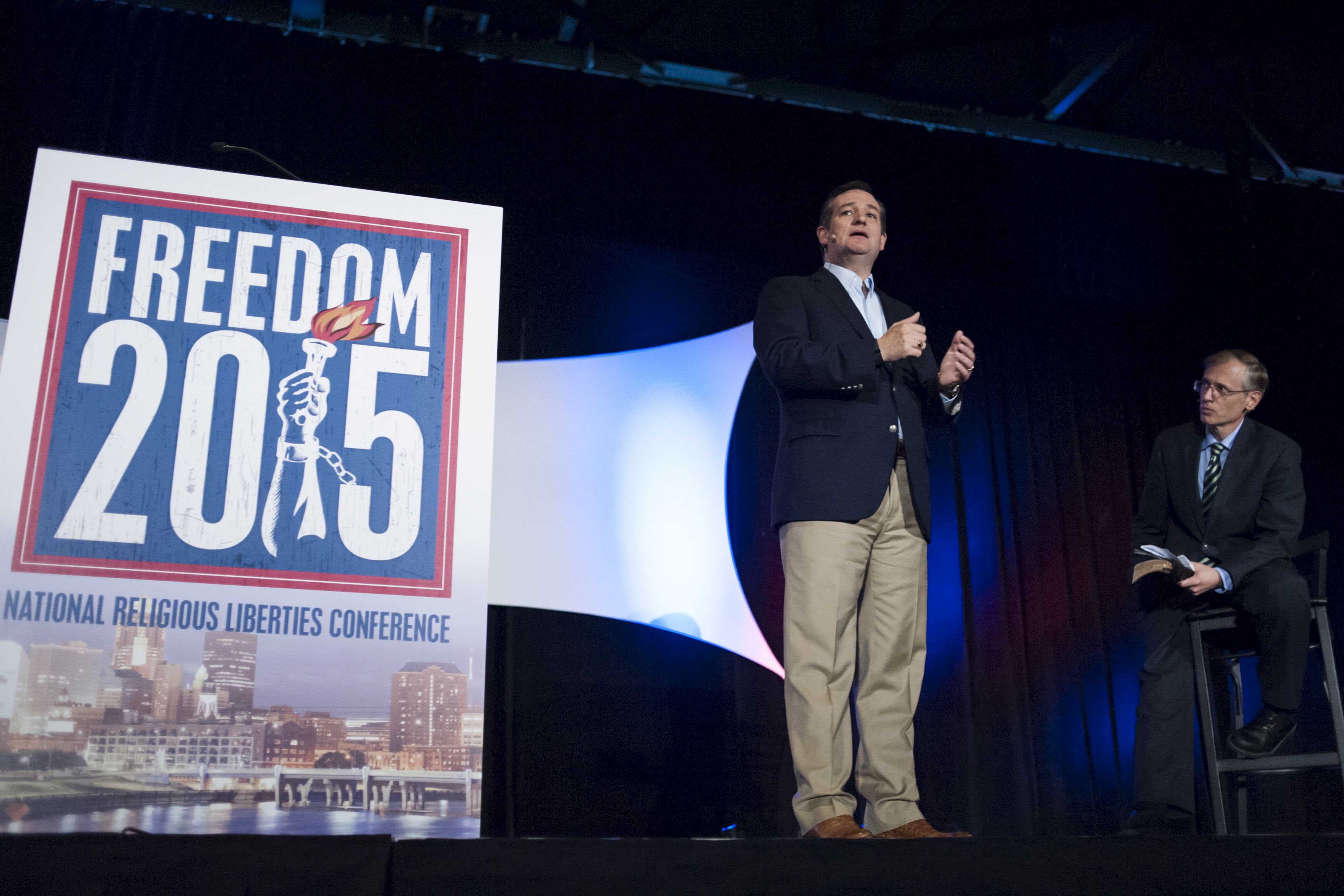 Before hearing from the presidential contenders, evangelical families collected name tags, perused a table filled with books like "What does the Bible Say About That: A Biblical Worldview Curriculum for Children" and connected with other like-minded conservatives. In the dimly lit hall, Kevin Sawnson, executive director of Generations, which was hosting the event, set the tone in describing same-sex marriage as a "significant cosmic revolution against almighty God."

"Some of our leaders are encouraging civil disobedience. Some of the most significant religious leaders in this country are looking you straight in the eye, and they are telling you, you disobey the Supreme Court of the United States in favor of the supreme law-giver of all this universe, and that is God. Well, friends, this is a wake-up call from the church," Swanson said. "I believe God is telling you are going to be persecuted. Either you are going stand with me or you are coming down with the rest of them."

When Cruz took the stage, he didn't hesitate in diving into how religion and government should be connected.

"Any president that doesn't start the day on his knees isn't fit to be commander in chief," Cruz passionately said.

Jindal pushed forth a similar message -- ardently citing the need for a religious revival in the U.S. He started off his 10 minutes on stage saying that the left is trying to take away First Amendment religious liberty rights. For this reason, Jindal told the room that 2016 will be "the most important election of our lifetime" and moved on to tout his own conservative record.

Huckabee, also diving head on into the social issues, said that same-sex marriage "is not law." He then moved quickly onto abortion, citing one prime question that has yet to be resolved: "Is the unborn child a person? Or just a blob of tissue?" From there, he pressed Republicans to force the left to defend themselves on what he called the right to kill a baby.

Asked if a few young men sporting red Cruz stickers were there to see the senator, Johan Gervais, a 25-year-old from Texas, said, "Well, we are here for the religious liberty conference." He had driven to the conference with seven of his evangelical friends and happily noted that Cruz is their senator.

But Cruz was a favorite in the room. "We like him," said Graham Featherston, one of Gervais' fellow roadtrippers from Austin. Featherston is only 15 but said that if he could vote he would vote for Cruz. The group drove over 14 hours to attend the conference and knew a group of four girls who had also made the trek.

Generations, the conference's host, is based in Colorado Springs and decided to host the conference in Iowa because this is its first political convention. It seemed "pivotal" to be in the state that first voices its opinion in the primary process, said one person who works at Generations.

Etsu Van Slooten, from Wisconsin, was there with her five children and her husband. Born in Japan, she went to college in the U.S. to study social work and immediately started working at Head Start, the federal program that promotes early childhood education for low-income families. But she soon realized that she needed to change her professions and devote herself more ardently to religion.

Pushing her stroller, Van Slooten said that she, like many others at the conference, was a homeschooler.

Rafael Cruz, Ted Cruz's father, took to the stage later in the evening for about an hour and made a pitch to the homeschooling families in the room, telling them that the government does not want parents helping kids with their homework because it brainwashes them.

Talking to reporters after his speech, the younger Cruz specifically addressed the relationship between him and his father, an immigrant from Cuba who he considers his hero.

"He is someone who I have admired my entire life because he knows what he believes and he stands up and tells the truth," Cruz said. "What a blessing to be a child of an immigrant who fled oppression. It makes you realize just how precious and fragile liberty is."

Huckabee said religious liberty should be applied to all religious perspectives.

Cruz and his father pressed home the need for voting momentum and action, urging people to get out and vote.

"If another 10 million evangelical Christians vote in 2016 and simply vote our values, we won't be up at 3 in the morning wondering what happened in Ohio and Florida," Cruz said. "They'll call the election at 8:35 p.m. because Christians would have turned this country around."

His father also urgently pressed evangelicals to get to the polls in order to fight back against "Christians being singled out."

"God didn't put Obama in power. We did! By sitting on our rear ends," the elder Cruz said. "Make sure everyone understands that voting is our civic responsibility."

Before leaving the stage, after almost an hourlong speech, he made the pitch that his son was the best choice. He described him as a leader, a fighter and the "man of the hour."

"Rafael for vice president!" an audience member shrieked as he walked off the stage.