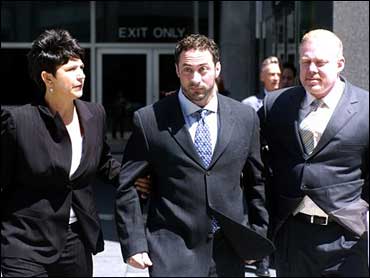 The chemist who created "the clear," a previously undetectable steroid, was sentenced Friday to three months in prison and three months' home confinement for his role in the BALCO drug scandal.

"I'm very regretful for what I've done and especially since what it has precipitated in sports and society," Arnold said outside court. "I do believe there should be a level playing field, and that this whole things needs to be addressed."

Arnold created the steroid in his Illinois laboratory. But he and his BALCO co-conspirators were tripped up when track coach Trevor Graham anonymously mailed a syringe containing the performance-enhancing drug to the U.S. Anti-Doping Agency in June 2003.

With "the clear" in hand, scientists were able to create a test to detect it.

The scientist is best known for introducing the steroid precursor androstenedione to the United States. Nicknamed "andro," the chemical came to public attention in 1998 when St. Louis Cardinals slugger Mark McGwire said he used it when he broke baseball's single-season home run record.

In April, Arnold pleaded guilty in federal court to one count of conspiracy to distribute steroids.

He was indicted in November on a charge of conspiring with BALCO founder Victor Conte to distribute tetrahydragestrinone, also known as "the clear," a powerful steroid that helped athletes add muscle mass and recover quickly from intense workouts.

"The defendant bears a heavy burden for his key role in effectively polluting professional sports with drugs which were designed to cheat the system," prosecutors said in court papers urging the prison term.

A new grand jury is investigating whether San Francisco Giants outfielder Barry Bonds lied about using "the clear" to the grand jury that investigated the BALCO lab more than two years ago. Graham also reportedly is a target of the federal steroids investigation, according to the New York Times, and is connected to several athletes who have tested positive or were suspended for using performance-enhancing drugs. Graham has denied any involvement with doping.

The indictment against Arnold alleged he trafficked in performance-enhancing drugs that were designed to avoid detection.

According to leaked excerpts of Bonds' testimony reported in the San Francisco Chronicle, Bonds told the BALCO grand jury he used a clear substance and a cream given to him by Anderson. Bonds, the second greatest home run hitter in the major leagues, testified that Anderson informed him the substances were the nutritional supplement flaxseed oil and a rubbing balm for arthritis.

Bonds' surgeon Arthur Ting, Anderson and Giants athletic trainer Stan Conte, no relation to Victor Conte, have been summoned to testify in front of the grand jury investigating Bonds for perjury and tax evasion.