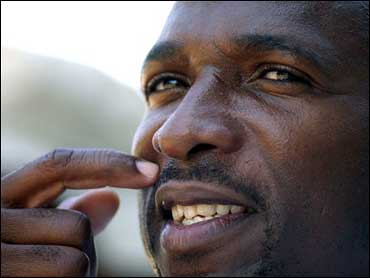 Chairman Peter Ueberroth made the announcement in a conference call and said the ban was "permanent."

"If there's something that convinces us to change our position, we'll look at it at a future time," he said.

Graham coaches sprinter Justin Gatlin, who recently disclosed a positive test for testosterone or other steroids. He has been involved with at least a half-dozen athletes who have received drug suspensions.

In June 2003, Graham helped launch the federal investigation of the Bay Area Laboratory Co-Operative by anonymously mailing a syringe containing a previously undetectable steroid to the U.S. Anti-Doping Agency.

Graham, who answered the door Thursday at his house in Raleigh, N.C., refused to comment on the ban.

Ueberroth said the extraordinary action was "based on the unusual number of athletes he has coached who have been convicted of doping offenses."

The USOC made no announcement about barring Graham from future competitions, which wouldn't be as easy as restricting access to training centers.

"There is a process spelled out. There are due rights for people to participate," CEO Jim Scherr said. "We'll follow those processes."

Ueberroth also announced the USOC will be issuing next week a "call to action, in capital letters," asking for greater support and research on doping issues from the federal government and from other sports entities in America.

"This is a national issue," Ueberroth said. "Nothing less than this will be needed, a collaborative effort. If we stand still, we run the risk of losing an entire generation of sports participants and sports fans. Anyone who cares about sports in this country has a vested interest in this outcome."

Graham claims Gatlin was sabotaged by a vengeful massage therapist who used steroid cream on him before the competition in April where he tested positive.

In 2003, he turned in the syringe that led to the uncovering of the BALCO scandal. He has always denied direct knowledge or involvement with performance-enhancing drugs.

But he has been squarely in the aim of the USOC, which has been looking for ways to penalize coaches, agents and trainers who influence athletes with positive tests. Enforcement of doping rules largely applies only to the athletes, though the U.S. Anti-Doping Agency does have the power to go after coaches, as well.

Thursday's announcement on Graham and "call to action" by the USOC marks something of a shift in focus for the federation, which spent years in the wake of scandal and reorganization trying to reallocate resources toward athletes to help their performance on the field.

After positive doping tests involving Gatlin and Tour de France winner and American cyclist Floyd Landis over the last week, the USOC's new talking point is not just about winning, but winning fairly.

"If we don't participate with honor and dignity, then what we do means nothing," Scherr said. "If there's cheating, then it's cheating other athletes, the American public and cheating the world of the legitimacy of sports."