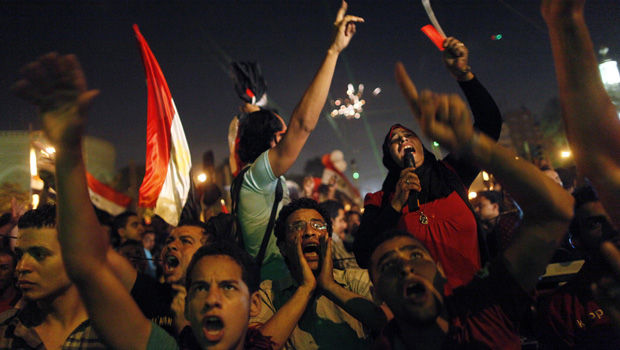 CAIROHis fate hanging in the balance, embattled President Mohammed Morsi vowed not to resign Tuesday, hours before a deadline to yield to the demands of millions of protesters or see the military suspend the constitution, disband parliament and install a new leadership.

The Islamist leader demanded that the powerful armed forces withdraw their ultimatum, saying he rejected all "dictates" — from home or abroad. Outside on the streets, the sense that both sides are ready to fight to the end sharpened, with clashes between his supporters and opponents. Officials told The Associated Press the violence left at least 23 dead, most of them in a single incident of fighting outside Cairo University.

In an emotional speech aired live to the nation, Morsi, who a year ago was inaugurated as Egypt's first freely elected president, pledged to protect his "constitutional legitimacy" with his life. He accused loyalists of his ousted autocratic predecessor Hosni Mubarak of exploiting the wave of protests to topple his regime and thwart democracy.

"There is no substitute for legitimacy," said Morsi, who at times angrily raised his voice, thrust his fist in the air and pounded the podium. He warned that electoral and constitutional legitimacy "is the only guarantee against violence."

Morsi's defiant statement showed that he and his Muslim Brotherhood are prepared to run the risk of challenging the army. It also entrenches the lines of confrontation between his Islamist supporters and Egyptians angry over what they see as his efforts to impose control by his Muslim Brotherhood and his failures to deal with the country's multiple problems.

Elyazal told Ward that technically, Morsi has the right to finish his term because he was democratically elected. "But you want me to wait until we see our country completely collapsed?" he said. "In the first year, he did many mistakes. Look at the economy in Egypt. I am running with my pistol in my back, why, because the streets of Egypt are not safe.

The crisis has become a struggle over whether a popular uprising can overturn the verdict of the ballot box. Morsi's opponents say he has lost his legitimacy through mistakes and power grabs and that their turnout on the streets over the past three days shows the nation has turned against him.

For a third day Tuesday, millions of jubilant, chanting Morsi opponents filled Cairo's historic Tahrir Square, as well as avenues adjacent to two presidential palaces in the capital, and main squares in cities nationwide. After Morsi's speech, they erupted in indignation, banging metal fences to raise a din, some raising their shoes in the air in a show of contempt. "Leave, leave," they chanted.

Morsi "doesn't understand. He will take us toward bloodshed and civil war," said Islam Musbah, a 28-year-old protester sitting on the sidewalk outside the Ittihadiya palace, dejectedly resting his head on his hand.

The president's supporters also moved out in increased marches in Cairo and other cities. Morsi's supporters have stepped up warnings that it will take bloodshed to dislodge him. While Morsi has stuck to a stance that he is defending democracy in Egypt, many of his Islamist backers have presented the fight as one to protect Islam.

"Seeking martyrdom to prevent the ongoing coup is what we can offer as a sign of gratitude to previous martyrs who died in the revolution," Brotherhood stalwart Mohammed el-Beltagy wrote Tuesday in his official Facebook page.

Political violence was more widespread on Tuesday, with multiple clashes between the two camps in Cairo as well as in the Mediterranean city of Alexandria and other cities. A march by Morsi supporters outside Cairo University came under fire from gunmen on nearby rooftops.

At least 23 people were killed in Cairo and more than 200 injured, according to hospital and security officials who spoke on condition of anonymity because they were not authorized to talk to the media. Most of the killings took place outside Cairo University located at Cairo's twin city of Giza. The official Al-Ahram website reported that the armed forces deployed armored vehicles to the area.

The latest deaths take to at least 39 the people who have died since the first day of protests, Sunday, many of them in shootings of anti-Morsi gatherings.

Morsi went on TV hours after meeting with the head of the military, Defense Minister Gen. Abdel-Fattah el-Sissi, with the prime minister also present, in their second such meeting in as many days.

On Monday, the military gave Morsi an ultimatum to meet the protesters' demands within 48 hours. If not, the generals' plan would suspend the Islamist-backed constitution, dissolve the Islamist-dominated legislature and set up an interim administration headed by the country's chief justice, the state news agency reported.

The leaking of the military's so-called political "road map" appeared aimed at adding pressure on Morsi by showing the public and the international community that the military has a plan that does not involve a coup.

On his official Twitter account, Morsi urged the armed forces "to withdraw their ultimatum" and said he rejects any domestic or foreign dictates."

Fearing that Washington's most important Arab ally would descend into chaos, U.S. officials said they are urging Morsi to take immediate steps to address opposition grievances, telling the protesters to remain peaceful and reminding the army that a coup could have consequences for the massive American military aid package it receives. The officials spoke on condition of anonymity because they were not authorized to speak publicly.

Morsi adviser Ayman Ali denied that the U.S. asked Egypt to call early presidential elections and said consultations were continuing to reach national conciliation and resolve the crisis. He did not elaborate.

The army has insisted it has no intention to take power. But the reported road map showed it was ready to replace Morsi and make a sweeping change in the ramshackle political structure that has evolved since Mubarak's fall in February 2011.

The constitution and domination of the legislature after elections held in late 2011-early 2012 are two of the Islamists' and Brotherhood's most valued victories -- along with Morsi's election last year.

A retired army general with close ties to the military confirmed the news agency report's version of the road map.

Hossam Sweilam said a panel of experts would draft a new constitution and the interim administration would be a presidential council led by the Supreme Constitutional Court's chief justice and including the defense minister, representatives of political parties, youth groups, Al-Azhar Mosque and the Coptic Church.

He said the military envisioned a one-year transitional period before presidential elections are held.

The military spokesman, Col. Ahmed Mohammed Ali, declined to confirm the details. "It is too early and we don't want to jump into conclusions," he said.

At least one anti-Morsi TV station put up a clock counting down to the end of the military's ultimatum, putting it at 4 p.m. Wednesday though a countdown clock posted online by Morsi opponents put the deadline at 5 p.m. The military did not give a precise hour.

Three government spokesmen -- two for Morsi and one for the prime minister -- were the latest to quit as part of high-level defections that underscored his increasing isolation and fallout from the military's ultimatum. Five Cabinet ministers, including the foreign minister, resigned Monday, and a sixth, Sports Minister El-Amry Farouq, quit Tuesday.

One ultraconservative Salafi party, al-Nour, also announced its backing for early elections. The party was once an ally of Morsi but in recent months has broken with him.