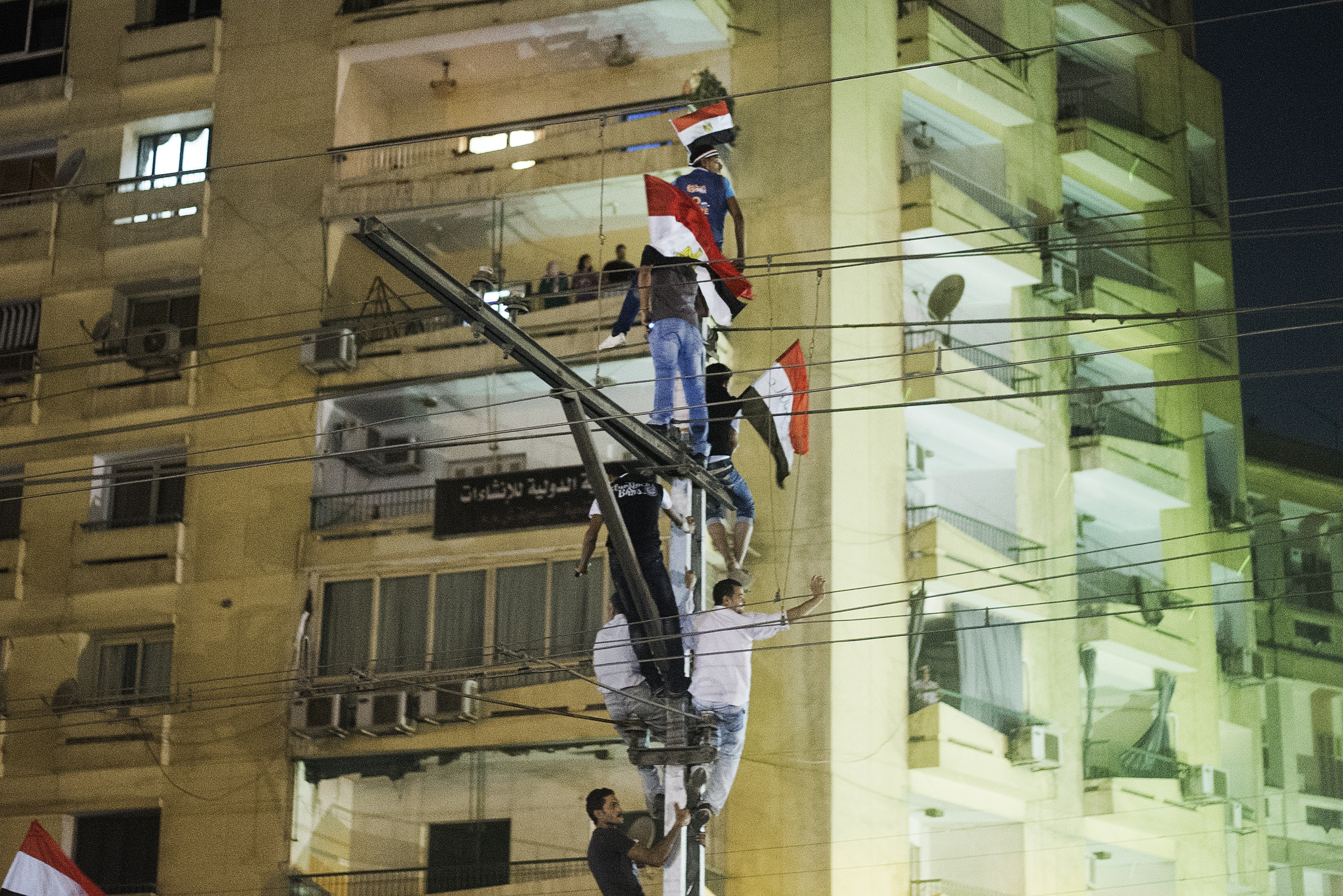 CAIRO With a military deadline for intervention ticking down, hundreds of thousands of protesters seeking the ouster of Egypt's Islamist president sought Tuesday to push the embattled leader further toward the edge with another massive show of resolve and unity.

In a significant move, opposition parties and the youth movement behind the demonstrations agreed that reform leader and Nobel Peace laureate Mohamed ElBaradei would represent them in any negotiations on the country's political future.

The pact, at least in theory, should end the bickering and rivalries that have plagued the opposition.

At the same time, President Mohammed Morsi faced fissures from within after a stunning surge of street rage reminiscent of Egypt's Arab Spring revolution in 2011 that cleared the way for Morsi's long-suppressed Muslim Brotherhood to win the first open elections in decades.

Three government spokesmen were the latest to quit as part of high-level defections that underscored his increasing isolation and fallout from the ultimatum from Egypt's powerful armed forces to either find a political solution by Wednesday or the generals would seek their own way to end the political chaos.

"If you get a Formula 1 racer into a car with four flat tires, no steering wheel and an empty tank, it's not going to drive. It needs to be fixed first," said Gihad al-Haddad.

The police, which are under control of the Interior Ministry, have stood on the sidelines of the protests, refusing even to protect the offices of the Muslim Brotherhood that have been attacked and ransacked. Their ministry has thrown its considerable weight behind the military.

In response to the growing pressures on Morsi, his Islamist backers have stepped up their own warnings that it may take bloodshed to dislodge him.

Some supporters say they would rather die fighting a military takeover than accept Morsi's ouster just a year after the country's first free election.

"Seeking martyrdom to prevent the ongoing coup is what we can offer as a sign of gratitude to previous martyrs who died in the revolution," Brotherhood stalwart Mohammed el-Beltagi wrote Tuesday in his official Facebook page.

Morsi, meanwhile, met with Defense Minister and army chief Abdel-Fattah el-Sissi and Qandil in the second such meeting in as many days. No details were given about the meeting, reported by an official at the president's office, Ayman Ali.

The meeting, however, suggests that efforts were being made to resolve the crisis, although there is little time and almost no political will from the opposition to accept anything less than Morsi's departure.

At least 16 have been killed in clashes since Sunday between Morsi's opponents and his many backers, who have equated the demonstrations and military arm-twisting to a coup against a democratically elected president.

The Tamarod, or Rebel, movement which organized the protests has given the president until 5 p.m. Tuesday (1500 GMT) to step down or face even larger demonstrations and possible "complete civil disobedience."

In a highly symbolic move, the crowds have camped out at Cairo's Tahrir quare, the birthplace of the 2011 uprising that toppled Hosni Mubarak. They also have massed outside the president's Ittahdiya palace in the leafy suburb of Heliopolis.

Across town, however, Morsi's backers have hunkered down at their own rally site, vowing to resist any attempts to nullifying his election last year and the rise of Islamist voices in Egypt's political affairs after bring muzzled under Mubarak.

On Monday, a line of around 1,500 men with shields, helmets and sticks — assigned with protecting the rally — stamped their feet in military-like lines, singing, "Stomp our feet, raise a fire. Islam's march is coming."

The volatile atmosphere has been made even more unsettled by the prospect the military could soon step in.

The military's declaration, read Monday on state TV, put enormous pressure on Morsi to step down and sent giant crowds opposing the president in Cairo and other cities into delirious celebrations of singing, dancing and fireworks.

But it also raised worries on both sides that the army could take over outright as it did after the 2011 ouster of Mubarak and raised the risk of a backlash from Morsi's Islamist backers, some of whom once belonged to armed militant groups.

Morsi's office issued a statement saying a "modern democratic state" was one of the main achievements of the anti-Mubarak uprising, adding, "With all its force, Egypt will not allow itself to be taken backward."

While not bluntly rejecting the ultimatum, it said Morsi was still reviewing the military statement and that some parts of it "could cause disturbances in the complicated national scene."

At the same time, he is grappling with growing dissent within his inner circle.

The official spoke on condition of anonymity because he was not authorized to speak to the media.

Also Tuesday, an Egyptian court dealt another blow to Morsi's authority, ruling that the president's widely disputed appointment of an attorney general last November was illegal.

Morsi's dismissal of Mahmoud Abdel-Meguid, who was appointed by Mubarak, was seen by the judiciary as an encroachment on its independence. The opposition has long demanded the removal of Abdel-Meguid's successor, Talaat Abdullah.

President Barack Obama said the U.S. is committed to democracy in Egypt, not any particular leader. Traveling in Tanzania, Obama said that although Morsi was democratically elected, the government must respect its opposition and minority groups.

Many of those now in the anti-Morsi campaign then led demonstrations against military rule, angered by its management of the transition and heavy hand in the killing of protesters.

Hours after its announcement, the military issued a second statement on its Facebook page denying it intended a coup. "The ideology and culture of the Egyptian armed forces does not allow for the policy of a military coup," it said.

In its initial statement, the military said it would "announce a road map for the future and measures to implement it" if Morsi and its opponents cannot reach a consensus within 48 hours — a virtual impossibility. It promised to include all "patriotic and sincere" factions in the process.

The military underlined it will "not be a party in politics or rule." But it said it has a responsibility to find a solution because Egypt's national security is facing a "grave danger," according to the statement.

It did not detail the road map, but it heavily praised the protests that began Sunday demanding that Morsi step down and that early elections be called.

Sunday's protests on the first anniversary of Morsi's inauguration were the largest seen in the country in the 2½ years of turmoil since Egyptians first rose up against Mubarak in January 2011.

Violence broke out in several parts of the country, often when marchers came under gunfire, apparently from Islamists. In Cairo, anti-Morsi youth attacked the main headquarters of the Muslim Brotherhood with stones and fire bombs, while Brotherhood supporters barricaded inside opened fired on them. The clash ended early Monday when the protesters broke into the luxury villa and ransacked it, setting fires.

Under a framework drawn up by Tamarod, after Morsi steps down, the head of the Supreme Constitutional Court would become an interim president and a technocrat government would be formed. An expert panel would write a new constitution to replace the one largely drafted by Islamists, and a new presidential election would be held in six months.

Outside the presidential palace, protesters contended that Morsi could not survive with only the Islamist bloc on his side.

"It is now the whole people versus one group. What can he do?" said Mina Adel, a Christian accountant. "The army is the savior and the guarantor for the revolution to succeed."