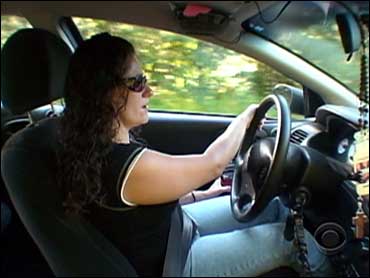 Her drive through the Adirondacks in upstate New York may be scenic, but it's not short.

Goralczyk's regular visits as a home health aide are a lifeline for Dennis, providing care and compainionship.

"Hey Mary! When are you going to get married again?" he asks her.

She laughed: "When you do!"

It's a good thing the work is rewarding, because the salary is not. Often pulling 50-hour weeks, Goralczyk makes about $25,000 a year.

"I don't think I'm poor. But I think there's a lot of things that I don't think we're going to be able to do that we used to do," she said. "Can't afford it."

That means buying brand-name shampoo or taking extra trips to the mall are out for 15-year-old daughter, Jamie.

"There's times, I know when winter's gonna come, it's gonna be really difficult," Goralczyk said. "I think it's gonna be difficult. 'Cause you gotta put gas in your car or put oil in your oil tank."

Goralczyk is reimbursed for the mileage, but that's not kept pace with the spike in gas prices … never mind the wear and tear on the car.

Three times a week, she drives an hour to another one of her clients, Steven Gonyo, who, at 54, had a brain aneurism and can't be left alone.

"I suppose this is something you think is never going to happen to you?" Doane asked Steven's wife, Juanita Gonyo.

"Nobody thinks this is going to happen," she said.

"Yes. No doubt about it. If they don't come, I don't work - then we go into the welfare system. And that's not where I want to be," she said.

But getting aides to make the long commute is a big concern. The Gonyos already lost Judy Gates' service one day a week.

"How long about was it when you decided - I can't keep working with the Gonyo's as much?" Doane asked Gates.

"Just about three weeks - I hung on for another week and then I just said, 'I can't, not with the gas prices and everything,'" she said.

And Gates has been in healthcare for 30 years - and says it's never been this tough. She's even had to borrow gas money.

"My car - it's all I have that's worth anything ... I don't want to just keep driving it until it stops. I don't have money to buy a new car," she said.

The Gonyos never thought they'd need this kind of care - but can't imagine how they'd do without.