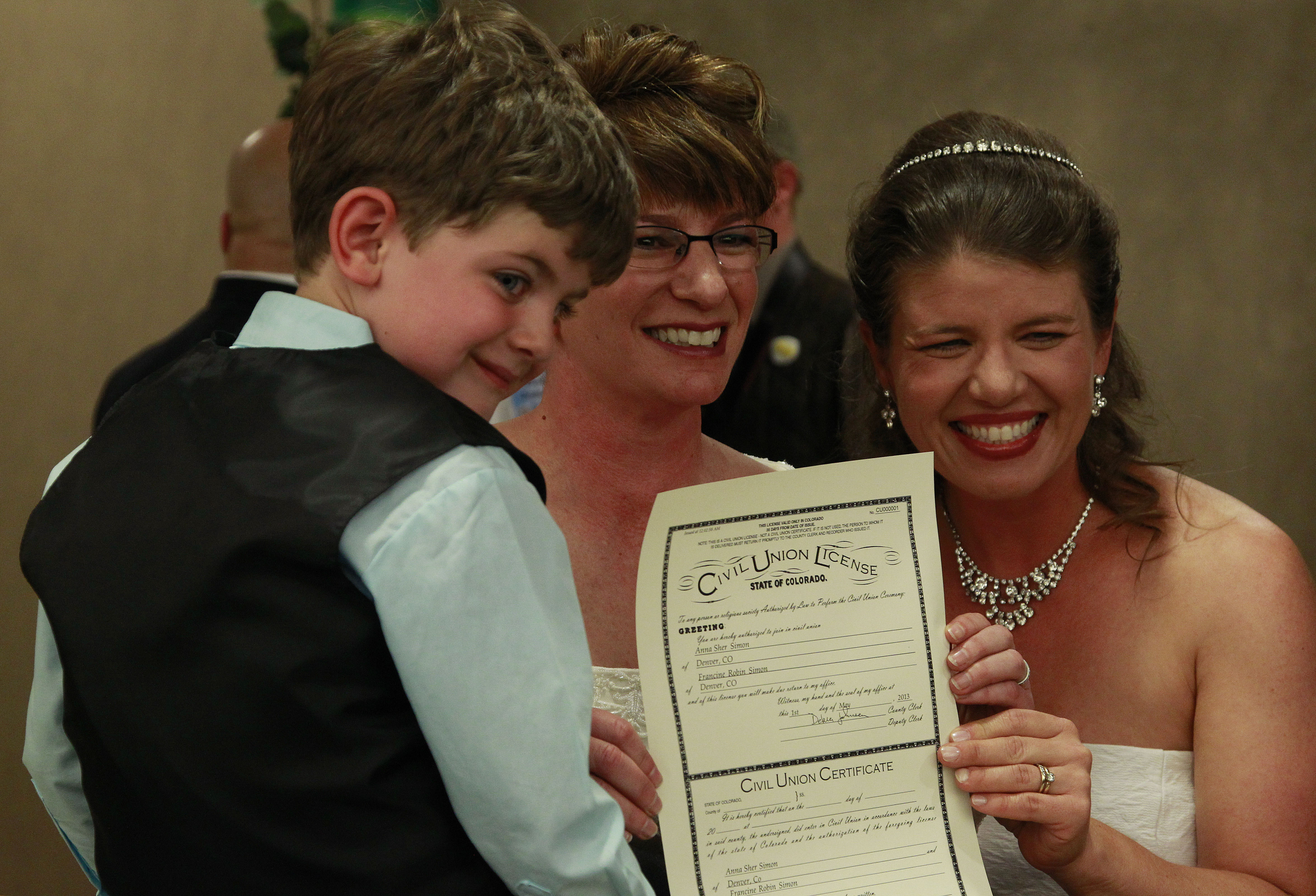 DENVERThe first same-sex couple granted a civil union in Colorado said their vows before hundreds of people early Wednesday morning at a downtown Denver municipal building where couples and members of the public gathered.

Fran and Anna Simon were the first to receive a civil union certificate. Wearing the white wedding dresses they wore at their commitment ceremony seven years ago and joined by their 5-year-old son Jeremy, Fran and Anna received their license from a clerk at 12:02 a.m., following an expectant countdown to midnight led by other couples. Minutes later they were joined in a ceremony officiated by Denver Mayor Michael Hancock.

"Our commitment doesn't change, but we will have a burden lifted off our shoulders," Anna Simon said. "Loving and committed couples need legal protections."

Colorado's civil unions law allows unmarried couples, both gay and heterosexual, the ability to form civil unions and get rights similar to those of married couples. They include transferring property, making medical decisions, adopting children and qualifying for health insurance and survivor benefits.

The statewide advocacy group One Colorado hosted the festivities, and the Denver clerk's office remained open until 3 a.m. to issue civil union licenses to couples eager to take advantage of their rights under the new law.

Couples were ushered into the clerk's office in small groups. They filled out paperwork and received their certificate, a moment that for many came with a quick kiss, a squeeze of hands or a few tears.

Signed certificates in hand, couples were then joined in official ceremonies performed before supporters and other couples in the atrium of the Wellington E. Webb Municipal Office Building.

"Members of the GLBT community are the same as everyone else — they want loving, permanent relationships," she said.

Hancock said he was honored to be part of the landmark event.

"I've been a part of the effort to legalize civil unions in Colorado now for several years. I feel a tremendous amount of pride for the people of Denver to work with their legislators to finally pass this piece of legislation to allow people to love and live as they so choose," he said.

In Boulder, 48 couples entered into civil unions overnight and the first license went to two Louisville women believed to have made history once before, the Daily Camera reported. The lawyer for Bonnie Lloyd and Pattea Carpenter said they're the first lesbian couple in the United States to have both of their names placed on their child's birth certificate.

Former county clerk Clela Rorex, who briefly issued same-sex marriage licenses 38 years ago, officiated at some of the ceremonies.

"It brings a lot of years kind of full circle finally, for me, and the decision I made years ago," Rorex told the newspaper.

Other counties waited until after daybreak to issue the licenses.

Colorado is the eighth state to have civil unions or similar laws. Nine states and the District of Columbia allow gay marriage.

Gov. John Hickenlooper signed the bill in March, marking the culmination of a dramatic shift in Colorado, where in 1992 voters approved a ban on discrimination protection for gays and in 2006 made gay marriage illegal under the state constitution.

But for many gay couples and gay rights advocates, the fight is not over.

Anna and Fran Simon, for example, who testified numerous times in favor of th2e civil union legislation, said they hope to get the chance to wear their wedding dresses one more time.

"Like most people growing up, you have a dream of falling in love and getting married, not getting a civil union," Anna Simon said.