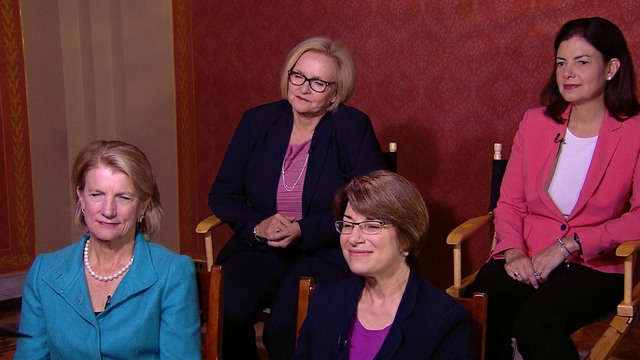 Issues gaining traction in the Senate, like campus sexual assault and human trafficking, share one common factor: They are spearheaded by women.

"When we join forces, we are a force to be reckoned with," Sen. Claire McCaskill (D-Missouri) told CBS News correspondent Julianna Goldman.

"Together there's a lot of trust," Klobuchar said. "We don't have much trust right now among members of Congress but we have it with the women senators."

That's not always the case with male senators.

"I think our relationships are maybe a little bit fuller," Capito said. "The comfort level is much higher when we get to the issues. It is friendships, but it's relationships into other parts of our lives."

McCaskill said they've fostered a natural camaraderie because they faced similar obstacles along their paths.

"We are working mothers, many of us, too, and I think we're very results-oriented," Ayotte said.

And the data backs that up. An internet startup called Quorum crunched the numbers and found that women in the Senate are better dealmakers and get more done than their male counterparts. Over the last seven years, female senators introduced more legislation than their male counterparts, were more bipartisan -- cosponsoring more bills from the opposite party -- and had more of their bills enacted by the entire Senate.

None of them were surprised by the data.

"We had to prove ourselves maybe a little more than the guys did, and I think that shows," Klobuchar said.

"You can't get one thing done yourself and so a natural coalition for me is all the other women in the Senate," Capito added.

Those relationships aren't built overnight. Almost 20 years ago, retiring Sen. Barbara Mikulski (D-Maryland) began the tradition of regular dinners. The only rules were no staff, no memos, no leaks and no men.

Ayotte said the men tend to wonder what happens at those dinners, but she wants to keep them guessing.

"I will confess that there was a time, just for fun, a bunch of us got together on the floor talking because it freaks them out," McCaskill said. "When we gather they are like, 'What are they doing? What are they up to?' So just sometimes we torment them, sometimes."

They say it's taken time to stamp out most remnants of the Senate's "old boys' club." Until 2008 the pool was off limits to women.

"It's not pretty. Some of the male senators liked to swim in the buff," McCaskill said.

Klobuchar said they had to be told they couldn't do that anymore.

"I will do everyone a favor and not say the senators names that like to swim in the buff, because I can't get it out of my hard drive and I'm sure others wouldn't be able to either," McCaskill said.

Their camaraderie has paid off. Women were largely credited with ending the government shutdown in 2013, keeping the lines of communication open, to find a compromise.

What do the ladies think Washington would look like if there were more women in the Senate?

"I think we would get a volume of more things done," Capito said. "We're doers; we want to see accomplishments."

"There would be a lot less of this backstabbing and, just the sort of hateful language and things," Klobuchar added.

Women make up 51 percent of the U.S. population, but hold only 20 percent of the seats in Congress. In the history of the Senate, there have been more than 1,900 male senators, but only 46 women.

"We've all had this, seen the discussion about 20 women historical number, which is great in terms of compared to where we've been, but we have a lot farther to go. I think all of us would agree on that." Ayotte said.

And it's not just politics: Women make up 47 percent of the workforce, but earn just 77 percent of what men do.

When it comes to corporate America, less than 5 percent of Fortune 500 CEOs are women.

Ayotte said today's young girls have a different perspective on the world, and that's crucial to keep moving forward.

They obviously don't always agree. There are fundamental differences between their two parties, but they say what they share transcends politics.