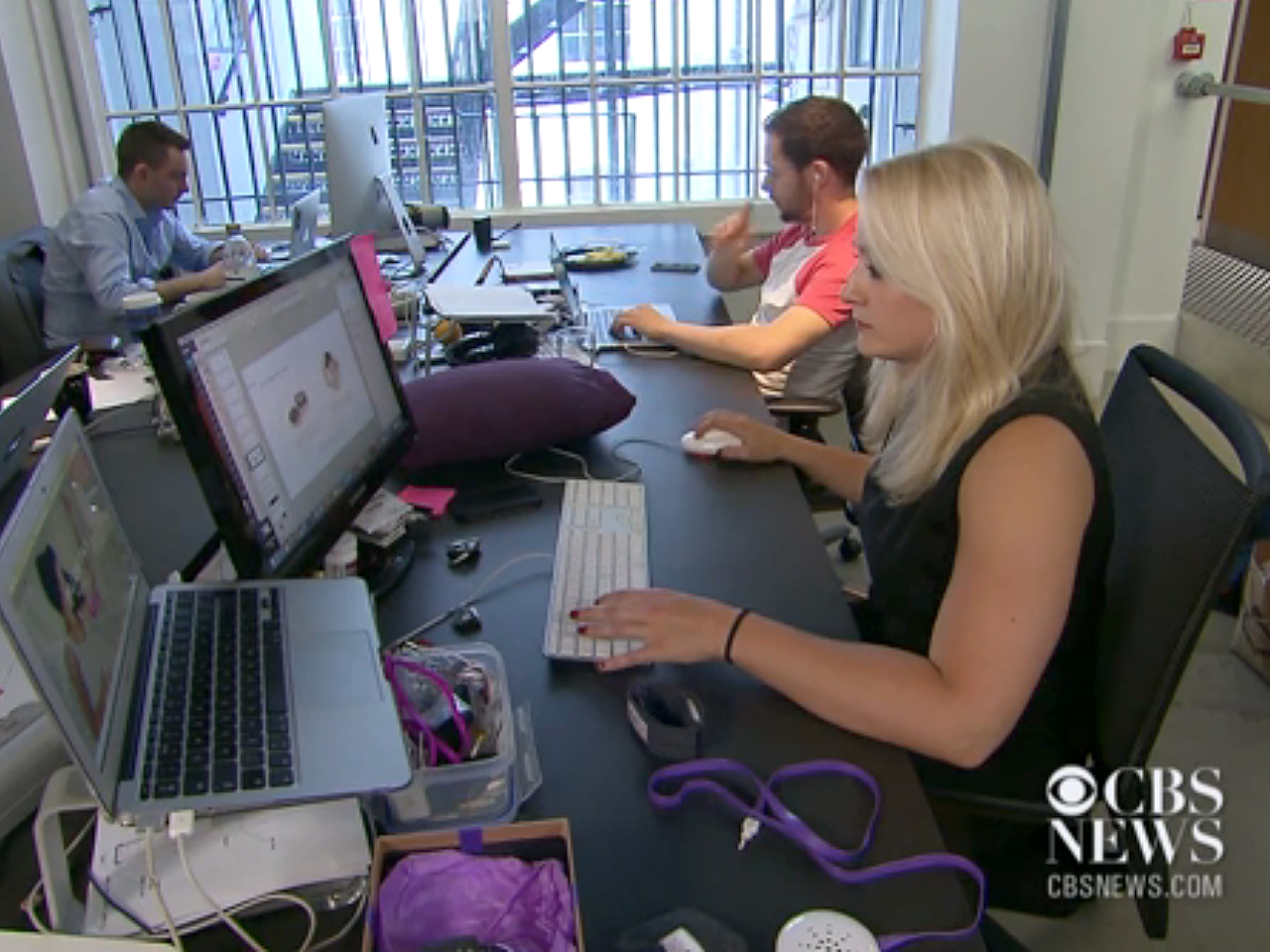 LONDON -- Joanna Montgomery wants you to hear your lover's heart beating as you drift off to sleep, even if your lover is thousands of miles away.

As a project during her college days, studying computer science, Montgomery designed a product to pipe that sweet sound directly to your ears -- through a small speaker in your pillow -- via a transponder worn by your significant other.

But as she told CBS News at her workspace in London, "it went viral on the internet. So then people started emailing me saying, 'can I buy it, I love it.'"

She's had about 44,000 people, most of them in the U.S., reach out to her asking about availability.

So she made her idea a reality, and called it "PillowTalk." It should hit store shelves and retail websites later this year.

But as a young entrepreneur with no business experience, Montgomery needed help, and that's how she ended up sharing a vast, open office space in central London with dozens of other fledgling tech start-ups.

The Wayra Accelerator is an incubator for tech start-ups. Dozens of entrepreneurs get a little space and a lot of help building their businesses from Wayra's corporate backer, Spanish telecom giant Telefonica.

In exchange, Telefonica gets a cut of the companies' profits. But according to Wayra U.K. Director Gary Stewart, just having direct access to the people dreaming up the must-have gadgets of tomorrow is also a huge benefit to a company like Telefonica.

While Montgomery has a lot in common with the other aspirational minds at Wayra, she's in a minority among London's entrepreneurs; she's a woman.

A survey of start-ups conducted by Wayra and a number of partners found that only about 30.3 percent of the people driving London's tech scene are female.

But perhaps more startling is the comparison between that figure from the "StartUpDNA" survey and the correlating figures from similar studies carried out in the U.S., most of which show women behind only 10 percent -- or fewer -- of the start-ups in Silicon Valley.

A lot of that comes down to which individuals venture capitalists are willing to put their money behind, and the research clearly shows that it goes overwhelmingly to men rather than women.

Montgomery says she's not experienced much bias in her transition from student to entrepreneur in the U.K., but there have been isolated incidents, particularly during visits to conferences and other events in Silicon Valley.

"I had a conversation with a guy and afterward he said 'you know, you're actually quite smart.' and I said huh? And he said, 'you're, well, you're probably used to people thinking you're stupid.'"

Stewart, the Wayra director, said surveys carried out by Telefonica and partners show "women are five times more represented in the U.K. relative to the U.S."

Trying to figure out what's behind the huge difference in women in the U.S. and U.K. start-up "environments," as they're called by techies, is tricky, but Stewart, an American with degrees from two Ivy League universities, has a theory.

"There's a queen, and the queen is a very powerful figure. They've had women as prime ministers... So I think that they're (Britons) not really that, you know, unused to women being in powerful positions."

Stewart says women -- and racial minorities -- need a confidence boost in what he calls the "hyper-masculine and macho" U.S. tech scene if they can hope to secure those vital venture capital dollars.

"When you're judging start-ups, what you're looking for is someone with almost a messianic complex, who says, kind of like Mark Zuckerburg in 'The Social Network': 'I don't really care what everyone thinks, I really believe I can create a billion dollar business,'" Stewart said.

And crucially, they need to be lured in early.

Tech commentator Shivvy Jervis, creator of the Digital Futures video series, believes "there's a role of parents and educators here; to talk to their 16-year-old daughters and their 16-year-old students to say hey, 'why not consider swapping home science for IT or coding?'"

Both Jervis and Stewart agree another big factor is the relative lack of role models across the technology industry.

"My female peers and I don't get called on as much as we'd like to be the pundits, to be the commentators on the panel shows, on the news shows when a massive tech story breaks," she told CBS News, adding with a smile that when such expertise is required on the airwaves, "we know the person that's going to be called on there is going to be pale, male, and stale."

According to Stewart, there are advantages to increasing the diversity of any tech start-up environment.

"If you have a lot of really smart people, a lot of really ambitious and passionate people trying to solve problems, but they can all add different points of view, kind of like the whole marketplace of ideas concept, at the end I think that we will get a much better output," he said.

Joanna Montgomery did leave college with a degree in computer science, and she believed in her idea enough to reject two job offers to pursue it, in spite of the advice of her peers.

"My friends were like, 'this is stupid, you're going to regret that. You have no idea what you're doing,'" she recalled.