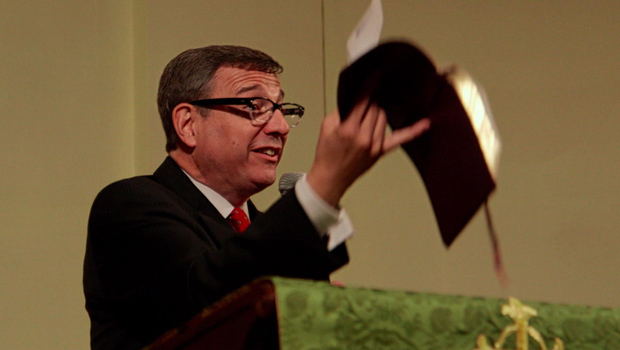 For the past few months we have been examining the role of guns in our society. Whether or not to own a gun is one of the life choices many people face, and as Mo Rocca tells us, it's a choice one evangelical minister is determined to make a matter of conscience:

"I am here to make a statement about the integrity and the value of every human life regardless of its condition of dependency."

For more than 20 years Reverend Robert Schenck has been a leading opponent of abortion, a fighter on the frontlines of the culture wars.

But recently the Reverend says he's had a revelation, about God and guns: "How can evangelicals be pro-life AND pro-gun? Who will ultimately save us? Christ or a Glock?"

That's put him on the other side of the aisle on one fundamental issue: guns.

Rocca asked: "A man or a woman who wants to defend his or her family legally owns a firearm in case someone comes into their home. How is that un-Christian?"

"Well, first of all you're making an immediate decision that if someone invades your home, they are going to die," Rev. Schenck replied. "So you are ready to kill another human being in your home. That brings about a big ethical question for the Christian. And we're told in the Bible, we're even to love our enemies."

"Even a potential intruder? Someone who's been coming into your home to hurt you?"

Schenck is not a pacifist, nor is he opposed to guns for hunting. The problem he says is civilians using guns for self-defense.

His conversion on the issue is the subject of the documentary "The Armor of Light," airing May 10 on PBS.

In it we witness his disagreements with fellow evangelicals, like Troy Newman:

Newman: "Okay, Rob, you're afraid of firearms? Don't own one."
Schenck: "Troy, listen. You know one of the reasons I don't own one? Because I don't trust myself in the moment of crisis."
Newman: "An armed society is a polite society."

It's a Disney movie, though not from the Disney you know. Director Abigail Disney is Walt Disney's grand-niece. She's also a liberal supporter of abortion rights who struck up an unlikely friendship with Rob Schenck.

"And how soon did those feelings lift?" asked Rocca.

"Instantaneously! He was so warm."

Rev. Schenck can be full of surprises. He was raised Jewish, which is why he says he's pro-life.

"Dad gave all of his children a thorough education in the Holocaust," he said. "I can remember being, oh, maybe six or seven years old, looking at the photos of mass graves. He emphasized how critical it was to respect the value of every human life."

At 17 he converted to Christianity, and by the early nineties was a conservative evangelical minister.

He led protests at Dr. Barnett Slepian's Buffalo clinic. Years later, Slepian -- who performed abortions -- was shot and killed by a pro-life activist.

Rocca asked, "Are you haunted by the murder of Dr. Slepian?"

"I'm haunted, not just by the murder of Dr. Slepian, which is enough, but by the other murders committed in the name of the pro-life cause," replied Rev. Schenck. "And I worked very hard at compartmentalizing that. Kind of putting it on a shelf and saying, 'Well, someday I'll address that.'"

That day came in 2013 when a gunman killed 12 people at the Washington Navy Yard -- right in Schenck's neighborhood.

"It was within a stone's throw of my house; I could see it from my living room window," he said.

He's now traveling the country evangelizing about what he says it means to be pro-life ... and about where Christians should NOT be turning for spiritual guidance.

"I'm concerned about the NRA promoting the idea that the best way to solve the most vexing problems in our society is to be prepared to shoot people dead," he preached.

Rocca asked, "Do you want to see gun laws change?"

"I have no legislative agenda; I'm a minister," Schenck replied. "For me, the most powerful part of it is the conscience. And that's the heart, and that's the mind. And that's where I'm going right now."

And as for Abigail Disney, since becoming friends with Rev. Schenck, she's had a conversion of her own: "I went back to this church that someone had told me about, and all of a sudden on Sunday morning I find myself looking forward to going to church."

"So you are going to church now?"

"And would you call yourself a Christian?"

"Yes. I think I've always been willing to call myself a Christian. But you hear all the tentativeness, right?"

"So you're a Christian working on not apologizing for going to church?" Rocca asked.

To watch a trailer for "The Armor of Light" click on the player below.