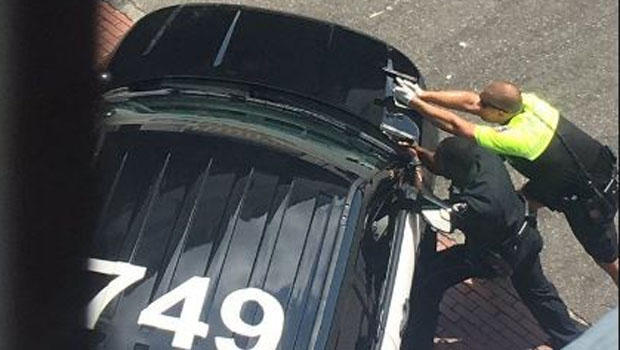 CHARLESTON, S.C. -- -A fired dishwasher shot and killed a chef and held a person hostage for about three hours before he was shot by police at a crowded restaurant in a tourist-heavy area of downtown Charleston on Thursday, authorities and one of the restaurant's owners said.

The gunman is in critical condition, Charleston mayor John Tecklenburg said Thursday. "Several" hostages who were being held inside the restaurant, Virginia's, are now safe, he said.

Officers who responded around 12:17 p.m. found one person suffering from a gunshot wound, and extricated the person from the building. That person, an employee, later died, Tecklenburg said.

"This is not an act of terrorism. This is not a hate crime. It is a disgruntled employee," Tecklenburg said.

Witnesses told CBS affiliate WCSC they were eating at the restaurant when the gunman ordered everyone out and yelled, "There's a new boss in town."

The man looked like "an ordinary grandpa, but he had a crazy look," Tom and Patsy Plant told The Post and Courier of Charleston. They were able to escape out a back door.

Charleston Police sent SWAT teams and a bomb disposal unit to the area. Authorities instructed people inside to stay inside and those outside to leave the area. A hostage negotiator was on the scene attempting to communicate with the gunman before he was shot by Charleston police, officials said.

Peter Siegert, 73, and his son Peter Siegert IV, 45, were quoted by The Post and Courier as saying that just after several waitresses and kitchen workers walked out the door without saying a word, a man in an apron with a gun came out of the kitchen and locked the front door.

He said, "'I am the new king of Charleston,'" the Siegerts said.

The man told diners to get on the floor and move to the back of the restaurant. The Siegerts said they escaped out a back door and didn't know how many people were left behind.

The restaurant is located on usually crowded King Street, a line of shops and eateries that caters to both tourists and residents in South Carolina's largest and most historic city.

The site is a few blocks away from Emanuel AME church, where nine black members of a church were killed by a white man during a June 2015 Bible study.