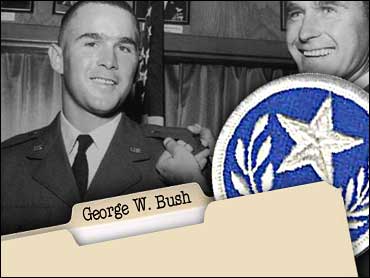 CBS News said Monday it cannot prove the authenticity of documents used in a story about President Bush's National Guard service and that airing the story was a "mistake" that CBS regretted.

CBS News Anchor Dan Rather, the reporter of the original story, apologized.

CBS News claimed a source had misled the network on the documents' origins. The network pledged "an independent review of the process by which the report was prepared and broadcast to help determine what actions need to be taken."

In a statement, CBS said former Texas Guard official Bill Burkett "has acknowledged that he provided the now-disputed documents" and "admits that he deliberately misled the CBS News producer working on the report, giving her a false account of the documents' origins to protect a promise of confidentiality to the actual source."

Rather spoke with Burkett

Dan Rather: "Why did you mislead us?"
Bill Burkett: "Well, I didn't totally mislead you. I misled you on the one individual. You know your staff pressured me to a point to reveal that source.
Rather: "Well, we were trying to get the chain of possession."
Burkett: "I understand that."
More of Rather questioning Burkett.

The network did not say the memoranda — purportedly written by one of Mr. Bush's National Guard commanders — were forgeries. But the network did say it could not authenticate the documents and that it should not have reported them.

"Based on what we now know, CBS News cannot prove that the documents are authentic, which is the only acceptable journalistic standard to justify using them in the report," said the statement by CBS News President Andrew Heyward. "We should not have used them. That was a mistake, which we deeply regret.

"Nothing is more important to us than our credibility and keeping faith with the millions of people who count on us for fair, accurate, reliable, and independent reporting," Heyward continued. "We will continue to work tirelessly to be worthy of that trust."

"There are a number of serious questions that remain unanswered and they need to be answered. Bill Burkett, who CBS now says is their source, in fact, is not an unimpeachable source, as was previously claimed," White House spokesman Scott McClellan told reporters Monday.

"Bill Burkett is a source who has been discredited in the past. So this raises a lot of questions. There were media reports about Mr. Burkett speaking with senior -- or having senior-level contacts with the Kerry campaign. That raises questions," McClellan said.

In a separate statement, Rather said that "after extensive additional interviews, I no longer have the confidence in these documents that would allow us to continue vouching for them journalistically.

"I find we have been misled on the key question of how our source for the documents came into possession of these papers," he said.

"We made a mistake in judgment, and for that I am sorry," Rather added.

"I feel like hell,''
he told WCBS reporter Marcia Kramer.

The authenticity of the documents — four memoranda attributed to Guard commander Lt. Col. Jerry Killian — has been under fire since they were described in the Sept. 8 broadcast of 60 Minutes.

CBS had not previously revealed who provided the documents or how they were obtained.

Burkett has previously alleged that in 1997 he witnessed allies of then-Gov. Bush discussing the destruction of Guard files that might embarrass Mr. Bush, who was considering a run for the presidency. Bush aides have denied the charge.

In the statement, CBS said: "Burkett originally said he obtained the documents from another former Guardsman. Now he says he got them from a different source whose connection to the documents and identity CBS News has been unable to verify to this point."

Questions about the president's National Guard service have lingered for years. Some critics question how Mr. Bush got into the Guard when there were waiting lists of young men hoping to join it to escape the draft and possible service in Vietnam.

In the Sept. 8 60 Minutes report, former Texas Lt. Gov. Ben Barnes — a Democrat — claimed that, at the behest of a friend of the Bush family, he pulled strings to get young George W. Bush into the Guard.

Other questions concern why Mr. Bush missed a physical in 1972, and why there are scant records of any service by Mr. Bush during the latter part of 1972, a period during which he transferred to an Alabama guard unit so he could work on a campaign there.

The CBS documents suggested that Mr. Bush had disobeyed a direct order to attend the physical, and that there were other lapses in his performance. One memo also indicated that powerful allies of the Bush family were pressuring the guard to "sugar coat" any investigation of Lt. Bush's service.

Skeptics immediately seized on the typing in the memos, which included a superscripted "th" not found on all 1970s-era typewriters. As the controversy raged, CBS broadcast interviews with experts who said that some typewriters from that period could have produced the markings in question.

Other critics saw factual errors in the documents, stylistic differences with other writing by Killian and incorrect military lingo.

Some relatives of Col. Killian disputed that the memos were real. His former secretary said the sentiments regarding Mr. Bush's failures as an officer were genuine, but the documents were not.

Some document experts whom CBS consulted for the story told newspapers they had raised doubts before the broadcast and were ignored. CBS disputed their accounts, pointing to the main document expert the network consulted, Marcel Matley.

Matley insisted he had vouched for the authenticity of the signatures on the memos, but had not determined whether the documents themselves were genuine.

Last week, CBS News stood by its reporting while vowing to continue working the story. The network acknowledged there were questions about the documents and pledged to try to answer them.

Mr. Bush maintains that he did not get special treatment in getting into the Guard, and that he fulfilled all duties. He was honorably discharged.

On Saturday, a White House official said Mr. Bush has reviewed the disputed documents that purport to show he refused orders to take a physical examination in 1972, and did not recall having seen them previously.

In his first public comment on the documents controversy, the president told The Union Leader of Manchester, N.H., "There are a lot of questions about the documents, and they need to be answered."

The Bush campaign has alleged that their Democratic rivals were somehow involved in the story. John Kerry's campaign denies it. In an email revealed last week, Burkett said he had contacted the Kerry campaign but received no response.

Meanwhile, a federal judge has ordered the Pentagon to find and make public by next week any unreleased files about Mr. Bush's Vietnam-era Air National Guard service to resolve a Freedom of Information Act lawsuit filed by the Associated Press.

The White House and Defense Department have on several occasions claimed that they had released all the documents only to make additional records available later on.