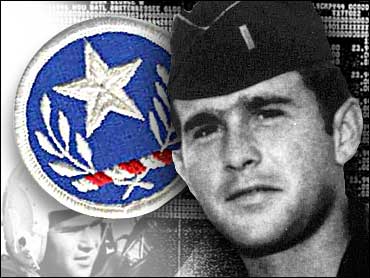 Questions are being raised about the authenticity of newly unearthed memos that say President Bush's National Guard commander believed Mr. Bush was shirking his duties.

The memos, which were obtained by CBS News' 60 Minutes, say Mr. Bush ignored a direct order from a superior officer and lost his status as a Guard pilot because he failed to meet military performance standards and undergo a required physical exam.

The network defended the autheniticity of the memos, saying its experts who examined the memos concluded they were authentic documents produced by Lt. Col. Jerry Killian.

But Killian's son, one of Killian's fellow officers and an independent document examiner questioned the memos.

Gary Killian, who served in the Guard with his father and retired as a captain in 1991, said he doubted his father would have written an unsigned memo which said there was pressure to "sugar coat" Mr. Bush's performance review.

"It just wouldn't happen," he said. "No officer in his right mind would write a memo like that."

The personnel chief in Killian's unit at the time also said he believes the documents are fake.

"They looked to me like forgeries," Rufus Martin told the Associated Press. "I don't think Killian would do that, and I knew him for 17 years." Killian died in 1984.

Independent document examiner Sandra Ramsey Lines said the memos looked like they had been produced on a computer using Microsoft Word software. Lines, a document expert and fellow of the American Academy of Forensic Sciences, pointed to a superscript — a smaller, raised "th" in "111th Fighter Interceptor Squadron" — as evidence indicating forgery.

Microsoft Word automatically inserts superscripts in the same style as the two on the memos obtained by 60 Minutes, she said.

"I'm virtually certain these were computer generated," Lines said to the Associated Press after reviewing copies of the documents at her office in Paradise Valley, Ariz. She produced a nearly identical document using her computer's Microsoft Word software.

In the Wednesday broadcast, 60 Minutes said the memos were "documents we are told were taken from Col. Killian's personal file."

In a statement, CBS News said it stands by its story.

"This report was not based solely on recovered documents, but rather on a preponderance of evidence, including documents that were provided by unimpeachable sources, interviews with former Texas National Guard officials and individuals who worked closely back in the early 1970s with Colonel Jerry Killian and were well acquainted with his procedures, his character and his thinking," the statement read.

"In addition, the documents are backed up not only by independent handwriting and forensic document experts but by sources familiar with their content," the statement continued. "Contrary to some rumors, no internal investigation is underway at CBS News nor is one planned."

Friday afternoon, CBS News addressed one of the authenticity issues raised, whether typewriters in the 1960s had the "th" superscript key. "CBS News states with absolute certainty that the ability to produce the "th" superscript mentioned in reports about the documents did exist on typewriters as early as 1968, and in fact is in President Bush's official military records released by the White House, CBS said in a statement. The issue will be addressed in Friday's Evening News broadcast, 6:30 p.m. ET.

Robert Strong was a friend and colleague of Killian who ran the Texas Air National Guard administrative office in the Vietnam era. Strong, now a college professor, also believes the documents are genuine.

The documents were described in a 60 Minutes story that featured a retired Texas politician's claim that he pulled strings to get young Mr. Bush, then a college graduate at the height of the Vietnam War in 1968, into the Guard — a posting that made service overseas unlikely.

Former Lt. Gov. Ben Barnes — then the 29-year-old speaker of the Texas House — told CBS News Anchor Dan Rather that he used influence on Mr. Bush's behalf at the request of a Houston businessman friendly with the Bush family, oilman Sid Adger.

The president's service record emerged as an issue during the 2000 race and again this winter. The Killian documents revived the issue of Mr. Bush's time in uniform after weeks in which Kerry, a decorated Vietnam combat veteran, has faced questions over his record as a Navy officer and an anti-war protester.

In May 1968, Mr. Bush signed a six-year commitment to fly for the Air Guard. Mr. Bush was honorably discharged from the Guard in October 1973 and left the Air Force Reserves in May 1974.

Early in his military career, Mr. Bush received glowing evaluations from Killian, who called Lt. Bush "an exceptionally fine young officer and pilot" who "performed in an outstanding manner."

Documents released this week show Mr. Bush with scores of 88 on an airmanship test, 98 on aviation physiology and 100 on navigational abilities.

The questions about Mr. Bush's service center on how Mr. Bush got into the Guard and whether he fulfilled his duties during a period from mid-1972 to mid-1973.

After taking his last flight in April 1972, Mr. Bush went for six months without showing up for any training drills.

That May, Mr. Bush skipped a required yearly medical examination. In response, his commanders grounded him on Aug. 1, 1972.

In September 1972 he received permission to transfer to the Alabama unit so he could work on a political campaign there.

What the Killian memos purported to show is that Mr. Bush defied a direct order to appear for the physical, that his performance as an officer was lacking in other ways and that Mr. Bush used family connections to try to quash any inquiry into his lapses.

In a separate revelation, the Boston Globe this week reported that Mr. Bush promised to sign up with a Boston-area unit when he left his Texas unit in 1973 to attend Harvard Business School. Mr. Bush never signed up with a Boston unit.