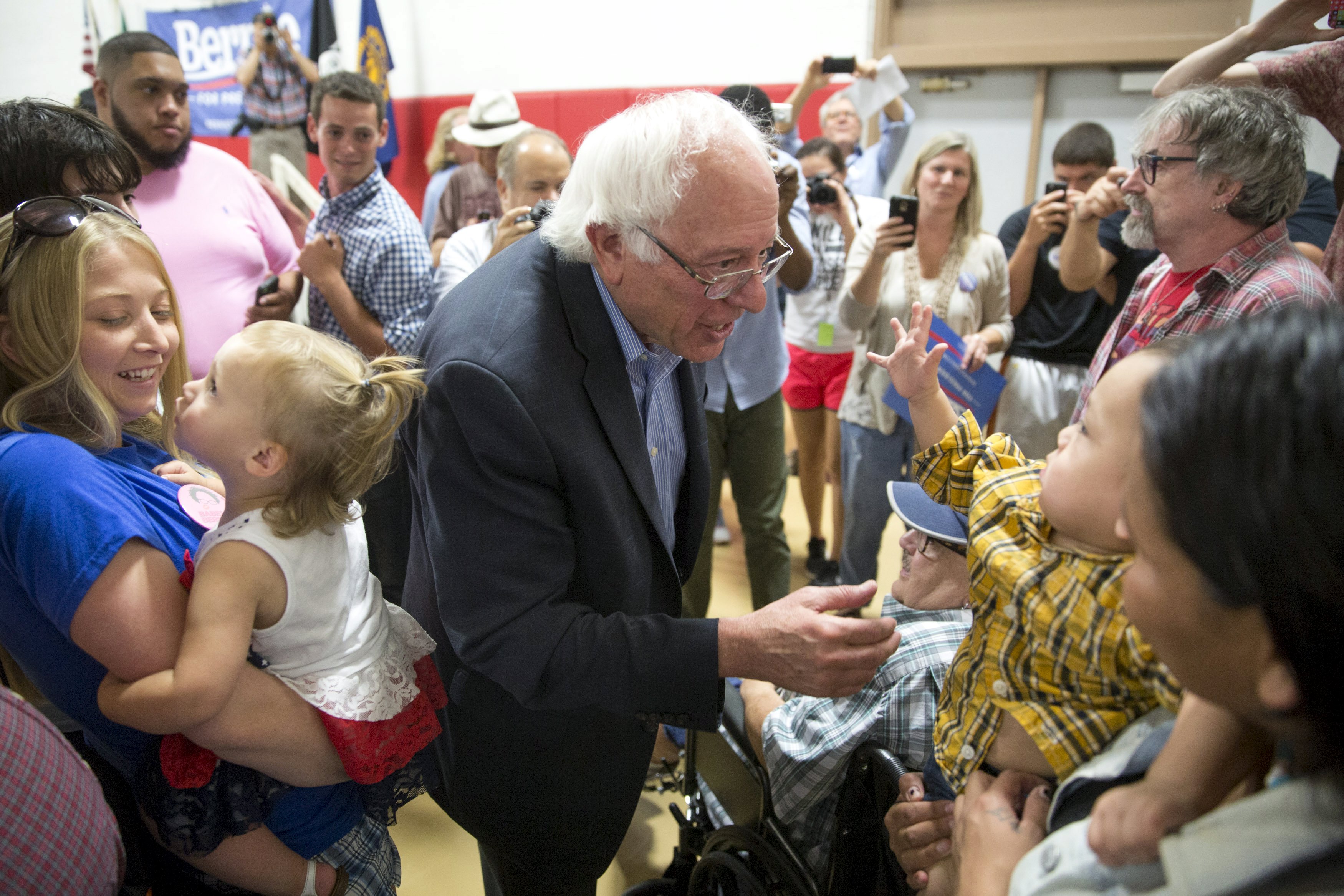 TAMA, Iowa -- Ernestine Keahna sat on a wooden bench outside the Meskwaki Tribal Center in Tama, Iowa, with three of her seven children, one granddaughter and one great-grandson. She stared off into a parking lot spread out on the 8,000 acre settlement of her homeland and spoke with her daughters about what they had just heard from Democratic presidential candidate Bernie Sanders.

"Too much sense. Like Obama," 78- year old Keahna said. "I wish Obama could run again." Keahna's daughters nodded their heads in agreement.

Sanders had just spent an hour of his Iowa tour in a gymnasium at the Meskwaki Tribal Center, where approximately 250 locals came to hear him speak. The settlement is not a hot spot for presidential candidates -- in fact, most people in the room couldn't recall a visit from a presidential candidate at all. Sanders drove to this campaign stop immediately after finishing a roundtable with more than 20 Hispanic community members in Muscatine, Iowa. With these back-to-back events in the Hawkeye State, Sanders' campaign is making it clear that he's hoping to gain traction with minority groups in the state.

Together, Hispanics and Native Americans only make up about 6 percent of the total population in the state. Yet in a caucus, every vote matters.

"In presidential elections, every vote makes a difference. That's because no one wins by a huge margin," said Steffen Schmidt, a political science professor at Iowa State University. He also noted that what candidates do in Iowa reverberates to minority populations all over the country.

The Sanders campaign will be hard-pressed to attract the energy and numbers that propelled a 2008 Obama caucus victory in Iowa, when more than 239,000 Democrats came out. Fewer than 125,000 Democrats showed up in 2004. The Obama Iowa coalition is not behind one Democratic candidate, and many say that reaching for those high numbers is unrealistic. But reaching out to small groups could be key.

Hillary Clinton and Sanders are doing it in different ways.

"I think you can come with your own ideas, and you can wave your arms and give a speech," Clinton said in an interview with MSNBC on Friday. "But are you connecting and really hearing what people are either saying to you or wishing that you would say to them?"

Yet Sanders is drawing in Iowa voters with a wide-ranging pitch for a "political revolution." During his recent swing, Sanders' fiery stance on specific issues stood out to certain minority groups that he met with. Making seven stops in Iowa over two days, Sanders only took questions at the Native American and Latino events.

At the Meskwaki settlement, Sanders stressed that climate change is real and caused by human activity.

Ernestine Keahna and her daughters, who express a deep connection to their land, felt emotional when hearing Sanders come out strong on the environment. The elder daughter is worried about the Keystone XL pipeline and is ready to protest it if necessary.

With the Latino community members in Muscatine, Sanders' comments on immigration and the treatment of the Hispanic community made an impact. He called the "mean and degrading" comments from Republican front-runner Donald Trump on immigrants "unacceptable," and he cautioned against blaming immigrants for all of the country's problems. He also stated his support for comprehensive immigration reform.

"We work to eat. A lot of people don't care about working because they can eat no matter what. We come to this country to work," said 66-year-old Jose Sanders, a retired foundry worker who was at the Sanders roundtable. "I like the way he talks."

Santos Saucedo dressed in a suit for Sanders' visit. He is the executive director of the Muscatine County Boxing Club that coaches about 35 kids every day for free. Most of the kids are Latino.

"He is definitely someone that I really like," said Saucedo, a fervent Democrat who is currently carrying out his own campaign to join the Muscatine City Council.

When asked about Clinton, Saucedo just shook his head. "Not her," he said.

Democrat Martin O'Malley has visited Muscatine, but Clinton has yet to come to the town.

It remains to be seen who these small pockets of Democratic Iowan Hispanic and Native American voters decide to support and, most importantly, if they will go out on caucus night.

"Well, that was history," said Charlie Shuckahosee, the Native American facilities manager at the Meskwaki Tribal Center, after folding up the 200 chairs he had set up for the Sanders event. He described Sanders as "pretty cool."

Yet when asked if he would caucus for Sanders, he paused.

"I thought Obama would get me to vote, but I didn't vote then either, so I don't know," Shuckahosee said with a laugh.