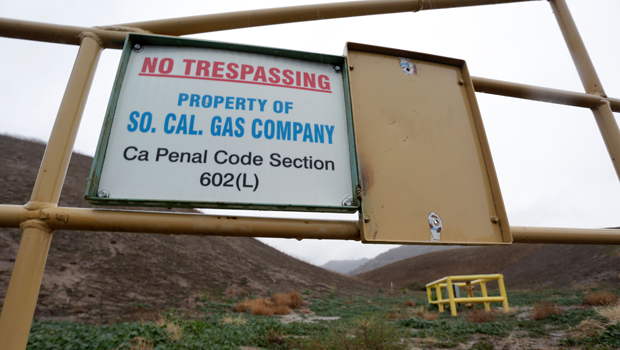 LOS ANGELES -- California Gov. Jerry Brown declared a state of emergency over a massive natural-gas leak that has been spewing methane and other gases into a Los Angeles neighborhood for months, sickening residents and forcing thousands to evacuate.

In a statement, Brown said Wednesday that he acted based on the requests of people in the community of Porter Ranch and the "prolonged and continuing" nature of the gas blowout at the underground storage facility.

The well, owned by Southern California Gas Co., has been gushing up to 1,200 tons of climate-changing methane daily, along with other gases, since it was first reported in October. It will be months before workers can stem the leak, experts say.

Along with other measures underway, Brown told the gas company to come up with backup plans in case efforts to close the blowout fail and ordered emergency regulations for other gas-storage facilities throughout the state.

The utility is paying to relocate thousands of households after residents complained of nosebleeds, nausea and other ailments from the fumes.

Los Angeles County and the Los Angeles school board already have declared the crisis an emergency, moving students out of two schools in the neighborhood.

The gas leak is "one of the most devastating environmental disasters in the history of California," Los Angeles Councilman Mitchell Englander said Wednesday.

Englander is one of a growing number of local officials and community members who urged the governor to act. Resident Matt Pakucko is another. He leads a community group that has been pushing for the state declaration and said he cried when he heard about the order.

Pakucko, speaking from a hotel where the gas company had moved him and his girlfriend, said he faced doubts from his community about pressing the governor to declare an emergency.

"I'm not worried about being validated or vindicated, but that people get what they need," he said. "And that's what we've been pushing for."

The massive leak amounts to about a quarter of the state's total output of methane, one of the most potent gases in climate change. The site is one of the country's largest underground natural-gas storage facilities and can hold enough natural gas to fuel Southern California for a month.

The crisis has threatened growing embarrassment for Brown, an international advocate of reducing the use of natural gas and other fossil fuels.

Brown toured the site of the leak for the first time earlier this week and met privately with residents in the area. The governor previously resisted local calls for a state declaration, saying he wanted to make sure the utility, rather than the state, bore the financial cost.

In his order, the governor said that California expected the utility to pay expenses related to the leak and that the state would ensure the utility's customers were protected from paying higher rates as a result.

Southern California Gas President Dennis Arriola said in a statement Wednesday that the company was focusing on stopping the leak and minimizing the harm to residents. The utility would work with the state to offset the long-term environmental impact of the methane, Arriola said.

Brown's order also forbids any additional injection of natural gas into the storage site for the time being. It directs state air officials to update the public regularly on the health risks and to plan a way to offset the huge emissions of methane.

The governor also directed a long-term look at the future of gas-storage sites in the state, including whether the fossil-fuel facilities fit Brown's ambitious plans to ramp up the use of solar, wind and other, cleaner energy sources.

One of Brown's strongest critics in the leak, Los Angeles County Supervisor Michael D. Antonovich, said the crisis is a "massive failure" of state oversight. On Wednesday, he called for an independent review of gas-storage sites and wells across California.