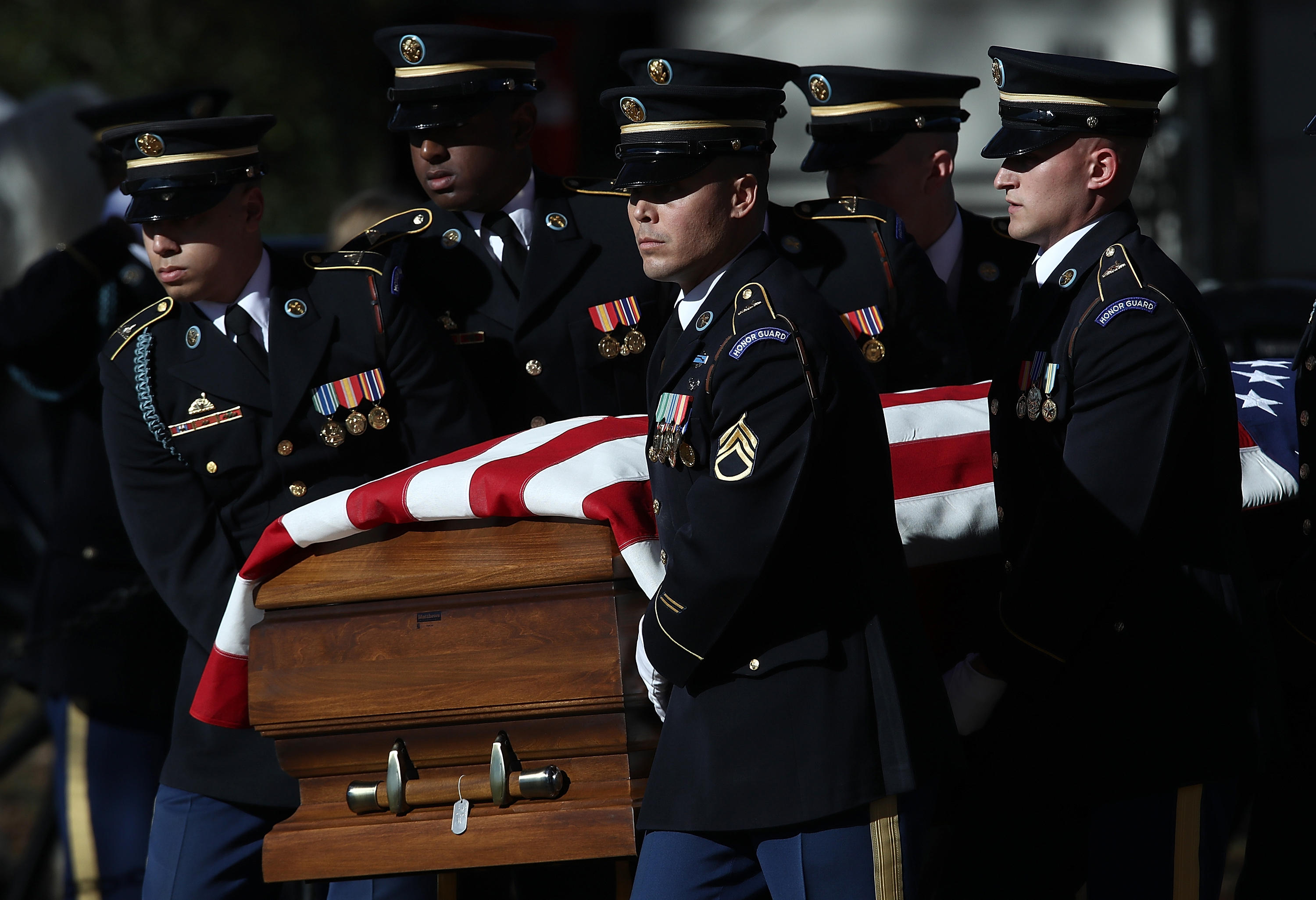 President Trump has created a new controversy over one of the most solemn duties of any president: speaking to families of troops killed in action. The White House said the president's chief of staff, John Kelly, did not get a call from then-President Obama when Kelly's son, a Marine lieutenant, was killed in Afghanistan.

Mr. Trump brought the issue up in a radio interview Tuesday.

The president has also been accused of being insensitive in a phone call to the widow of a Green Beret killed in west Africa earlier this month. She received the call while on the way to greet her husband's casket at the airport.

Details of the conversation came from a Democratic congresswoman who overheard the call. On Wednesday, the soldier's aunt who raised him confirmed the report to The Associated Press and The Washington Post.

When servicemembers are killed in action, it takes at least a week before the highest levels of the White House are provided with twice-vetted information about the deceased and their families, CBS News' Arden Farhi reports.

The AP spoke Tuesday with family members who have lost loved ones in U.S. military operations and asked them about their interactions, if any, with the commander in chief at the time - President George W. Bush, Mr. Obama or Mr. Trump.

Here's a sampling of their stories:

Jodie Missildine's 20-year-old stepson, Alex Missildine, was killed Oct. 1 when an IED exploded near his vehicle in Ninawa Province, Iraq.

Missildine joined the Army right after finishing high school in Tyler, Texas, and was awarded a Bronze Star. He had been in Iraq for less than a month when he was killed.

Jodie Missildine said the family had received an outpouring of support from Washington since receiving news of Alex's death. But when asked if Mr. Trump had been in contact, she said, "We will not speak ill of a president who adores his troops."

"Tears to my eyes"

Natalie Healy, of Exeter, New Hampshire, lost her son, Daniel Healy, in 2005. He was a U.S. Navy SEAL who died on a rescue mission in Afghanistan.

She received a letter of condolence from Mr. Bush. "President Bush didn't call us at the time, which didn't bother me, particularly. I got to meet him a couple of times afterward and he was extremely sensitive, and his sincerity about how I was doing brought me to tears, to tell you the truth.

"I could feel his warmth and concern, and his sincere caring."

The first time, in Manchester, New Hampshire, "he said, 'How are you doing, Mrs. Healy?' I said, 'I'm fine, sir.' And then he put a hand on either side of my shoulders and he said, 'No really, how are you doing?' Well, I wasn't expecting him to be like that, so it brought tears to my eyes, and I do not cry in public. That really touched me."

Ann Baddick's 26-year-old son, Army Sgt. Andrew J. Baddick, of Jim Thorpe, Pennsylvania, drowned on Sept. 29, 2003, while trying to save a fellow soldier whose vehicle plunged into a canal.

She said she received a signed letter of condolence from Mr. Bush. She and members of her family also met with him at Fort Bragg in North Carolina.

"He couldn't have been any nicer and more sincere."

As for Mr. Trump's comments suggesting that presidents before him did not adequately reach out to Gold Star families: "I was just dumbfounded when I heard it last night. I thought, 'My God, you don't know what you're talking about.'"

"Made me feel good"

It was less than 24 hours after Natasha De Alencar had seen her husband's body returned from Afghanistan to Dover Air Force Base that she got a call from Mr. Trump offering his condolences. She doesn't remember how long they spoke. It was a bit of a blur.

Her husband, Staff Sgt. Mark De Alencar, 37, a Special Forces soldier, was shot and killed in April in Afghanistan in an operation against militants with the Islamic State of Iraq and Syria, or ISIS. His death was the first U.S. combat death in Afghanistan in 2017.

"It made me feel good, knowing what my husband had done for his country," that Mr. Trump took the time to call, she said. "My husband was awesome. My world sucks without him."

"Any chance I get to speak about that man, I take it." She lives in Okaloosa County, Florida.

Relatives of Sgt. Thomas Sullivan, a Springfield, Massachusetts, native who was killed in an attack on the U.S. Naval and Marine Reserve Center in Chattanooga, Tennessee, in July 2015, received a formal letter from Mr. Obama but not a phone call.

Joseph Sullivan, of Hampden, Massachusetts, is the brother of Sgt. Sullivan, a member of the U.S. Marine Corps. He says his 40-year-old brother helped rescue more than a dozen soldiers when a Kuwait-born gunman unleashed a barrage of fire in an attack that began at a nearby military recruiting center.

Sullivan says the letter he described as "boilerplate" came a few weeks after his brother died. But his parents were "kind of" waiting for a phone call from Mr. Obama, and not getting one has bothered them since.

Army 1st Lt. Weston C. Lee of Bluffton, Georgia, was killed in an explosion while on patrol in Mosul, Iraq, on April 29. About 10 days later, Mr. Trump called the family, 10 minutes sooner than had been arranged.

"He did what he said he was going to do," Aldene Weston Lee, the soldier's mother, said of Mr. Trump. "That held a lot of weight with me."

Lee said her husband, Eddie, did all the talking with Mr. Trump as she listened on a speaker phone along with her son, stepson, daughter-in-law and two grandchildren.

"The first thing he said was how very sad he was for us to have lost Weston and that it made him very sad," Lee said. "He said, 'I have things in front of me that nobody else has access to and, from everything I can see and everything I know, your son was a very, very fine young man.'"

Mr. Trump said to her husband: "I bet you that you never had any trouble with him." Eddie, replied: "No, sir, I never did."

His tone, she said, was more like that of a fellow parent than of her son's commander in chief.

"He said, 'From all accounts your son was a lovely young man,'" Lee said. "He said that a couple of times. And I thought, I hadn't thought about using 'lovely,' as far as my son being a young man. But that's a beautiful word."

Sheila Murphy's son, Army Spc. Etienne J. Murphy, 22, died May 26 after an armored vehicle he was riding in rolled over in Syria. The Army told his family Murphy's death was "non-tactical" - meaning he didn't die in combat - but revealed few other details, citing an open investigation.

The Army Ranger's parents in Snellville, Georgia, in metro Atlanta never heard from Mr. Trump by phone or by letter. Neither did Murphy's widow.

"Because it was non-combat, I feel like maybe he thought it was an accident, it doesn't matter," Sheila Murphy said. "But my son was in Syria."

She said the Army casualty assistance officer assigned to her family told her "the White House called him to ask about us. And he told me that we were going to be receiving a letter from the White House."

She said she finally wrote a letter to Mr. Trump about six weeks ago, to let him know she and her husband still are grieving, but got no reply.

"It wasn't a mean letter," she said. "I was telling him I know he's a grandfather. I told him I'm trying to be here for my grandkids, but some days I don't want to live."

One of Monti's men, Pvt. Brian Bradbury of St. Joseph, Missouri, was shot during the encounter. Monti, who enlisted at age 17, twice left cover and ran into the open under intense enemy fire to retrieve the wounded soldier. On Monti's third attempt, he was struck, and died on the field. Three others, including Bradbury, also died during the fight.

Monti's father, Paul Monti, said he received a signed letter of condolence from Mr. Bush, though no phone call.

But in 2009, Mr. Obama called him to say Jared had been awarded the Medal of Honor. "He was very gracious on the phone and told me that he and the entire nation were proud of my son," Paul Monti said.

"When I met him in Washington he was again very gracious and he and Mrs. Obama were very genuine in their compassion. They made a positive out of a very sad day."

Army Spc. Christopher Michael Harris, 25, of Jackson Springs, North Carolina, was killed along with another soldier in a suicide attack in Afghanistan in August.

His widow, Brittany Harris, said the White House did offer to set up a call with Mr. Trump but "it fell through" and no letter came from the president. She figured Mr. Trump was too busy with the approach of Hurricane Harvey and North Korea woes. The family, though, saw Vice President Mike Pence at Dover Air Force Base, where they went to receive Michael's remains, and found Pence's words comforting.

Now 17 weeks pregnant, Brittany Harris said she's had an outpouring of support from the Pentagon and others in government, handwritten notes from Defense Secretary James Mattis and many others. "Everybody treats me like gold, salutes me, takes off their hats for me," she said.

Parker said Mr. Bush came to the Fort Indiantown Gap Army post in northeastern Pennsylvania shortly after her son's death, to meet her family and the families of the other Guard members killed that month. He met privately with each one.

"He took my son who was just 21 and held him and let him cry. He said he didn't know what he would do if it was his child."

Aaron Butler, a 27-year-old guardsman from Monticello, Utah, was killed Aug. 16 at a booby-trapped building in Nangarhar Province, Afghanistan. His mother, Laura Butler, and family spokesman Bill Boyle say Mr. Trump has not called. Many other officials have.

"The family is very careful that they do not want to be pulled into a partisan slugfest," Boyle said. "He would be very upset if his name or his death or his sacrifice was used as a tool to divide the country, and they're fearful that this could happen."