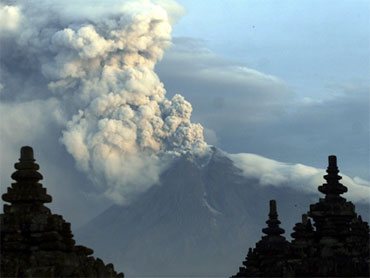 President Bush and Iraqi Prime Minister Ibrahim al-Jaafari stood shoulder to shoulder at the White House on Friday, both pledging eventual victory over the terrorists and their daily attacks. "I am confident the Iraqi people will continue to defy the skeptics as they continue to build a new Iraq," said Mr. Bush.

"This is not the time to fall back," said al-Jaafari.

Mr. Bush rejected the idea of setting a timetable for the withdrawal of U.S. forces from Iraq.

"Why would you say to the enemy here's a timetable, just go ahead and wait us out? That doesn't make any sense to have a timetable. If you give a timetable you're conceding too much to the enemy," Mr. Bush said at a joint White House news conference.

The two leaders fielded questions hours after a a suicide car bomber attacked a U.S. military convoy in Fallujah, killing five U.S. Marines and a sailor.

Mr. Bush conceded that it bothers Americans to see scenes of carnage on television.

"There's no question there's an enemy that still wants to shake our will and get us to leave," he said. "They try to kill and they do kill innocent Iraqi people, women and children 'cause they know that the carnage that they reap will be on TV and they know that it bothers people to see death."

Mr. Bush said he would stay the course in Iraq despite public opinion polls showing dwindling support for his policies. He indicated his awareness of his domestic critics when a reporter began asking a question about whether he was concerned about a "slump" in his support.

"Quagmire?" the president asked, employing a word that some Democrats in Congress have begun to use to describe the military presence in Iraq one year after the transfer of sovereignty.

His visitor, al-Jaafair, seemed to recognize the domestic pressure on the president.

More than 1,700 American troops have died in Iraq, the majority of them since the end of hostilities aimed at toppling the regime of Saddam Hussein. There have been 479 car bombs in Iraq since the handover of sovereignty on June 28, 2004, according to an Associated Press count.

Freedom of the press Iraqi-style was on display when a reporter asked the two men when reconstruction would begin in the wartorn country.

Mr. Bush said he wasn't trying to "pass the buck," but looked at al-Jaafari and said "they're in charge," meaning the Iraqis.

The continued bloodshed in Iraq underscored comments from the top American commander in the Persian Gulf, who told Congress on Thursday that the insurgency has not grown weaker over the past six months.

"I believe there are more foreign fighters coming into Iraq than there were six months ago," Gen. John Abizaid said during a contentious Senate Armed Services Committee hearing. "There's a lot of work to be done against the insurgency."

The testimony undercut Vice President Dick Cheney's recent assertion that the insurgency was in its "last throes."

Asked whether he wanted to revise his comment, Cheney told CNN on Thursday, "No, but I'd be happy to explain what I meant by that."

"I think there will be a lot of violence, a lot of bloodshed, because I think the terrorists will do everything they can to try to dispute that process (of training security forces)," Cheney said. "But I think it is well under way. I think it's going to be accomplished."

At the committee hearing, Abizaid, Defense Secretary Donald H. Rumsfeld and other defense officials were grilled about how long U.S. troops would be in Iraq. Some lawmakers have proposed setting a timetable for U.S. withdrawal — an idea that Rumsfeld said would be a mistake. He insisted that U.S. troops were making progress. "Those who say we are losing this war are wrong," Rumsfeld said.

Rumsfeld told the committee that he blamed part of the loss of public support on news coverage of the war that he believes highlights the bloodshed and ignores political progress, reports CBS News Senior White House Correspondent Bill Plante.

Rep. John McHugh, R-N.Y., told Rumsfeld he feared that not enough Iraqis were turning their back on the insurgents.

"If they don't start trending in that way, I'm deeply concerned that we are looking at a long-term quagmire," McHugh said.