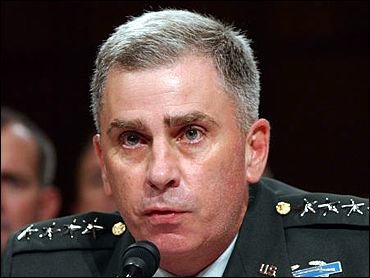 The top American military commander in the Persian Gulf disputed a contention by Vice President Dick Cheney that the Iraqi insurgency was in its "last throes" and told Congress on Thursday its strength was basically undiminished from six months ago.

Furthermore, Gen. John Abizaid told the Senate Armed Services Committee, "I believe there are more foreign fighters coming into Iraq than there were six months ago."

His testimony came as Defense Secretary Donald H. Rumsfeld rejected any effort to set a timetable to get U.S. troops out of Iraq, reports CBS News Correspondent Bob Fuss

"That would be a mistake," Rumsfeld told the Senate panel. He said Americans just have to stay the course and ignore the naysayers.

In a CNN interview last month, Cheney said: "The level of activity that we see today from a military standpoint, I think, will clearly decline. I think they're in the last throes, if you will, of the insurgency."

Sen. Carl Levin of Michigan, the committee's senior Democrat, asked Abizaid if he realized he was contradicting Cheney.

"I don't know that I would make any comment about that other than to say there's a lot of work to be done," said Abizaid. "I gave you my opinion."

Levin and other congressional Democrats — and some Republicans as well — have criticized administration officials for painting an unrealistically rosy picture of the situation in Iraq.

"The fact is that the insurgency has not weakened," Levin said. "Our men and women in uniform are serving with great honor. They deserve an objective assessment of the situation in Iraq. They deserve a clear layout of the next steps there."

"They're not getting either from the administration," Levin said.

For his part, Rumsfeld sought to explain what Cheney meant.

Between now and when an Iraqi constitution is drafted and voted on later this year, "They may very well be in their last throes by their own view cause they recognize how important it will be if the lose," he said.

Of Cheney's words specifically, Rumsfeld added: "While I didn't use them and I might not use them, I think it's understandable that we can expect that kind of a response from the enemy."

Testifying on the progress in training Iraq's own security forces, Rumsfeld said these forces have "a way to go," but progress was being made.

"Success will not be easy and it will require patience. ... But consider what has been accomplished in 12 months," Rumsfeld said, citing elections in January, economic improvements, and an increasingly improving security force.

"Timing in war is never predictable. There are never guarantees," Rumsfeld said. "Those who say we are losing this war are wrong. We are not."

Rumsfeld engaged in some contentious exchanges with committee Democrats.

"Isn't it time for you to resign?" Sen. Edward M. Kennedy, D-Mass., asked the defense secretary, citing what he called "gross errors and mistakes" in the U.S. military campaign in Iraq.

"I've offered my resignation to the president twice," Rumsfeld shot back, saying that President Bush had decided not to accept it. "That's his call," he said.