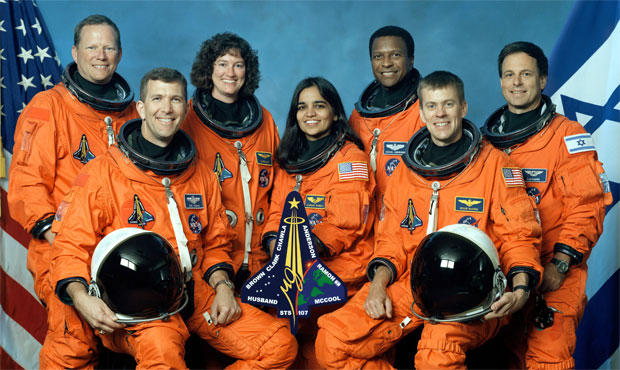 When the space shuttle Columbia tumbled out of control during re-entry on Feb. 1, 2003 -- 15 years ago today -- the orbiter was just west of Dallas, 38 miles up and traveling at more than 12,000 mph. The 100-ton spacecraft quickly broke apart, killing all seven astronauts on board and raining debris along a path stretching from central Texas to western Louisiana.

Miraculously, no one on the ground was injured.

But recovering the shuttle's crew and then figuring out what went wrong -- and what might be needed to ensure a safe return to flight -- was critical for NASA. The International Space Station was not yet complete and was dependent on a steady stream of shuttle flights to deliver major components, crew members and supplies.

Engineers already knew a piece of foam insulation broke away from Columbia's external tank during launch 16 days earlier, hitting the underside of the shuttle's left wing. Telemetry downlinked from Columbia during entry indicated problems in the left wing, but NASA's senior managers did not initially believe the events were related.

The only way to really understand what doomed the veteran shuttle and its seven-member crew was to recover as much wreckage as possible, looking for the tell-tale signs of damage or failure that might indicate when, where and how the fatal breakdown occurred.

Easier said than done. Finding those critical components in a 645-mile-long, 10-mile-wide debris "footprint" was extraordinarily difficult. And, when it came to recovering Columbia's crew, it was heartbreaking.

In the new book "Bringing Columbia Home -- The Untold Story of a Lost Space Shuttle and Her Crew," Michael Leinbach, NASA's last shuttle launch director, and co-author Jonathan Ward have put together an insider's day-to-day account of the salvage operation, shedding light on the enormous challenges that defined the search and recovery effort.

Written in first person from Leinbach's perspective, "Bringing Columbia Home" also documents an outpouring of public support for NASA and the U.S. space program, paying tribute to the legions of tireless volunteers who turned out in force to help the space agency in its hour of need.

That public outpouring of support is a story that I found particularly resonant today, showing the willingness of Americans to pull together with grit and determination when the need arises.

"Here, the people kept what they saw and experienced out of the press," Leinbach writes. "They enfolded the NASA family in a respectful, loving and healing embrace, and they rose to address a national tragedy in a manner that is difficult for outsiders to fully comprehend."

Recovery forces did not know it at the time, but Columbia's two-deck crew cabin apparently broke away from the fuselage about 20 seconds after the orbiter tumbled out of control. The module then fell freely for 30 seconds or so before succumbing to extreme aerodynamic stress.

The crew members were killed by blunt force trauma as hypersonic airflow tore the ship apart. The astronauts fell to Earth near Hemphill, along a path 14 miles long and one mile wide.

Leinbach handles this part of the story with welcome restraint, not identifying specific astronauts or describing the remains. Instead, he provides a touching look at how astronauts like Mark Kelly and his twin brother, Scott, worked with law enforcement and the clergy to recover the fallen astronauts with the appropriate dignity and respect.

Three hours after Columbia went down, Leinbach writes, a jogger called in the first report of remains along a road a few miles from Hemphill. Reaching the scene, Mark Kelly quickly confirmed the find. The sheriff called the local funeral home director to assist and asked for a clergyman to perform a service before the body was removed. "Brother Fred" Raney, pastor of the Hemphill First Baptist Church, responded.

With each recovery, "a Texas Ranger or DPS (Department of Public Safety) officer, Brother Fred and a funeral director ... would meet the FBI evidence recovery team and astronaut at the site," Leinbach writes. "Once the group was assembled, the scene was turned over to the astronaut to step forward and preside over the recovery of his or her colleague.

"When the astronaut was ready, he or she would signal Brother Fred to approach, who then performed a brief service offering a few words on the heroic sacrifice of the crew member, reading certain verses from the Scripture, and then saying a prayer."

Only then was the body turned over to the evidence recovery team and taken to a hearse.

Because Columbia's crew included Ramon, an Israeli, and Chawla, who was born in India, Kelly and Brother Dave "researched appropriate words to say for Hindi and Hebrew services," Leinbach writes. "All of the subsequent services included Christian, Hebrew and Hindi prayers."

"Then he realized ... if people 'strap a million pounds of dynamite to their butts for someone else to light, they'd better have mighty deep faith.'"

The crew recovery effort was carried out in parallel with the overall search operation and Leinbach recounts dozens of significant finds along the way, wreckage that was shipped back to the Kennedy Space Center where it was laid on on a grid in an unused hangar for detailed analysis.

One of the most significant finds was a data recorder discovered sitting upright in a field on March 19, more than a month and a half after the mishap. It was remarkably undamaged, and the 28-track tape inside the black box held recorded signals from 570 sensors located throughout the orbiter. It was a gold mine.

Using that data, investigators put together a detailed timeline, showing when -- and where -- various sensors failed or began generating anomalous readings, pointing toward a breach in the left wing's leading edge.

At the Kennedy Space Center, Leinbach helped oversee the reconstruction effort, including assembly of a plexiglass mockup of Columbia's left wing leading edge with recovered fragments and panels laid out as they had been on the spacecraft.

The damage was consistent with a hole in the underside of the left-wing leading edge that matched up almost perfectly with the sensor data.

The independent Columbia Accident Investigation Board ultimately concluded Columbia's fate was sealed 82 seconds after liftoff on Jan. 16, 2003, when a briefcase-size piece of foam insulation broke away from the ship's external tank and struck the underside of the left wing at a relative velocity of more than 500 mph.

The foam blasted an unseen hole in one of the reinforced carbon carbon panels making up the left wing's leading edge, allowing super-hot air to blast into the wing during re-entry, melting it from the inside out. Sixteen minutes after Columbia plunged back into the discernible atmosphere, the wing failed, throwing the ship out of control.

In the end, aircraft search crews logged some 5,000 hours searching 1.6 million acres and nearly 25,000 men and women searched more than 680,000 acres on foot, an area equivalent to Rhode Island. Altogether, the recovery crews spent 1.5 million person hours in the search, recovering about 38 percent of Columbia, or 84,700 pounds. About 90 percent of the crew module was recovered.

"Bringing Columbia Home" is a definitive account of the herculean search and recovery effort. While the accident board's final report covers the salvage operation in some detail, Leinbach and Ward provide a welcome glimpse into the human side of a task NASA never hopes to repeat.

How Generation Z is changing the tech world
William Harwood