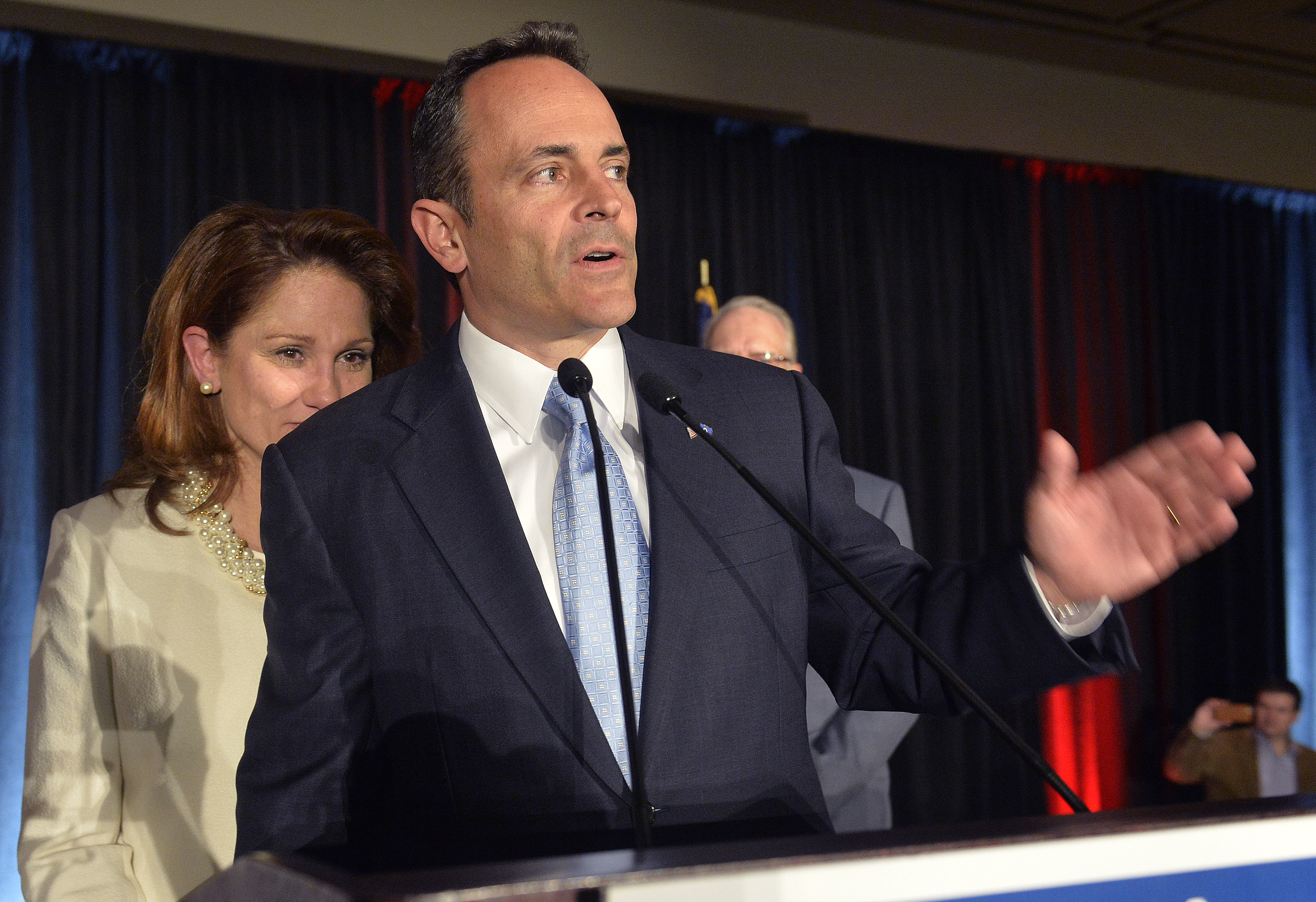 Kentucky voters on Tuesday elected just the second Republican in four decades to the governor's office, in a race many pundits said hinged largely on President Obama's signature legislation, the Affordable Care Act.

The result was a potentially troubling sign for Democrats ahead of next year's presidential election and represented a big win for the GOP as it continues to consolidate political power across the South.

In Kentucky, Republican businessman Matt Bevin had waged a campaign to scale back the state's Medicaid expansion that was made possible under the federal health care overhaul. Some 400,000 lower-income people who gained health coverage under the expansion could be affected.

"The degree to which the national party is out of step with mainstream Kentuckians has created an environment where it's extraordinarily difficult for a Democrat to win statewide," said state Auditor Adam Edelen, who lost his re-election bid to a little-known Republican state representative.

"Republicans have dominated federal elections in Kentucky, but moderate Democrats have maintained control of state government," CBS Lexington affiliate WKYT-TV points out. "Bevin's election gives Republicans control of the executive branch along with a commanding majority in the state Senate. Democrats still have an eight-seat majority in the state House of Representatives.

"Focus will almost immediately shift to the state House elections in 2016, where [Majority Leader] U.S. Sen. Mitch McConnell has vowed to flex his powerful fundraising muscle for Republicans to take over the only Southern state legislative body controlled by Democrats."

Around the country, several high-profile ballot initiatives tested voter preferences on school funding, marijuana, gay and lesbian rights and the sharing economy. Despite the relatively low number of races, the generally bad results for Democrats and liberal causes could be an important bellwether of sentiment ahead of next year's presidential elections.

"I don't think you can point to one singular issue as to why these defeats happened tonight, but it's an opportunity for Democrats to recalibrate and continue to develop a plan and a strategy to win in 2016," said Tharon Johnson, who led Obama's 2012 re-election effort in the South and helps oversee finances for the Democratic National Committee.

Besides Kentucky, the only other gubernatorial campaign was in Mississippi, where Republican Gov. Phil Bryant easily won re-election.

The governor's race in Mississippi was overshadowed by a fight over a constitutional amendment that would allow people to sue the state to increase funding for public schools. Voters defeated the proposed amendment.

Critics say it would have taken budget decisions away from Mississippi lawmakers and given the courts too much power.

In Virginia, a swing state, Democrats failed in an expensive bid to take control of the state Senate and empower Democratic Gov. Terry McAuliffe in negotiations with Republicans who control the state House. With the losses in Virginia and Kentucky, it was a rough Election Day for Democrats.

Elsewhere, Houston voters defeated a closely watched ordinance that would have established nondiscrimination protections for gay and transgender people in the city, and Ohio voters rejected an initiative that sought to legalize the recreational and medicinal use of marijuana.

In Houston, the nation's fourth-largest city, efforts to secure non-discrimination protections for gay and transgender people failed by a 2-to-1 margin. Now that same-sex marriage is legal, such laws have become a priority for gay, lesbian, bisexual and transgender groups. Opponents, including a coalition of conservative pastors, said the measure would have infringed on their religious beliefs.

In the race for Houston's next mayor, veteran state Rep. Sylvester Turner and Bill King, a former mayor of a Houston suburb, will meet in a Dec. 12 runoff. It was one of more than 300 mayoral races happening across the country. In Philadelphia, former longtime Councilman Jim Kenney was elected mayor on a promise to fight poverty and push for universal pre-kindergarten education.

The Salt Lake City mayoral race featured a tight race between two-term incumbent Ralph Becker, one of President Barack Obama's appointees on a climate change task force, and former state lawmaker Jackie Biskupski. The race remained too close to call, as thousands of mail-in ballots that were dropped off at polling places Tuesday remain to be counted. If Biskupski wins, she will be the city's first openly gay mayor.

State judicial elections in recent years have become a focal point for political parties and interest groups seeking to influence the courts. Tuesday's election to fill three open seats on the Pennsylvania Supreme Court was the latest judicial contest to attract heavy attention and spending.

Campaign contributors poured at least $11.5 million into the race, which saw Democrats win all the seats.

San Francisco voters rejected a citizen-backed initiative to restrict the operations of Airbnb, the room-rental site.

In Washington state, voters overwhelmingly approved a measure to add state penalties for anyone who imports certain animal products for commercial purposes, such as elephant ivory or rhino horns

And Colorado voters decided to let the state keep $66 million in tax revenue generated from the sale of recreational marijuana. An existing state law requires excess tax revenue to be returned to taxpayers, but on Tuesday voters agreed to make an exception with the marijuana revenue and direct it instead toward public education and drug-prevention programs.

In some other races of note:

-- A San Francisco sheriff caught up in a national debate on immigration reform lost his bid for re-election by a wide-margin. Partial returns from Tuesday's vote show Sheriff Ross Mirkarimi losing to retired sheriff's official Vicki Hennessy. She has the backing of Mayor Ed Lee and the deputies association. The San Francisco sheriff's office has been in the spotlight since a Mexican national in the country illegally was charged in the fatal shooting of a San Francisco woman this summer. Prior to the shooting, the man was released from Mirkarimi's jail even though federal officials had requested that he be detained. Mirkarimi vigorously defended the city's sanctuary policies, which generally prohibit law enforcement from cooperating with immigration officials.

-- Suburban Denver voters overwhelmingly ousted three conservative school board members who changed the way teachers are paid and briefly considered reviewing a U.S. history curriculum to promote patriotism. The high-profile political battle attracted a huge influx of cash from inside Jefferson County and from outside groups with an interest in what education reforms should look like. Recall supporters included teacher unions, while the three booted board members were backed by the conservative powerhouse Americans For Prosperity.

-- Voters ousted the mayor of Flint, Michigan, a Detroit suburb that has been dealing with fallout from drinking water problems. Newcomer Karen Weaver beat incumbent Dayne Walling in Tuesday's election. While Walling was mayor, Flint switched from Detroit's water system to water from the Flint River last year in a cost-cutting move. Officials recently confirmed elevated blood-lead levels were found in children.

-- A career prosecutor involved in the re-investigation of a decade-old sexual-assault claim against Bill Cosby won a suburban Philadelphia race for district attorney, a result that could lead to criminal charges being filed. Democrat Kevin Steele will lead the Montgomery County office where he has been closely involved in a recently reopened investigation of a 2005 sexual-assault complaint against the entertainer.