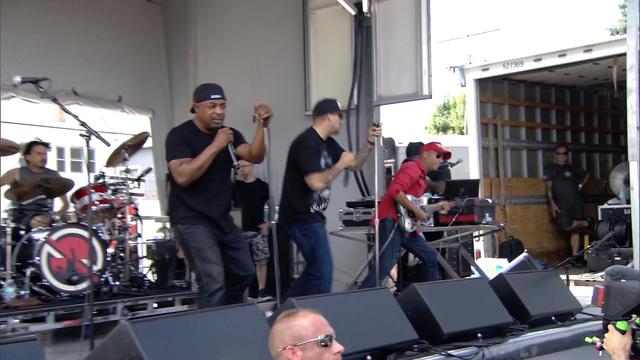 CLEVELAND, Ohio -- If riffs could start a revolution, then the Prophets of Rage hope it starts now.

Across town, Republican presidential nominee Donald Trump may be the headlining act at the Republican National Convention, but Tuesday night the band came to town with the intention of disrupting the party, reports CBS News correspondent Vladimir Duthiers.

"What we do is we play music. We play it loud and we play it with meaning," guitarist Tom Morello said.

"I describe this band as an elite task force of revolutionary musicians who have come together during this historic, crazy political juncture," he said.

Formed this year, Prophets of Rage is a collection of rock veterans. Three guys from the '90s band Rage Against the Machine teamed up with B-Real from Cypress Hill and Chuck D from the 1980s rap group Public Enemy.

All three ensembles were known for their politically charged lyrics and in-your-face performances.

"It's a reintroduction of a particular style of how music and words can actually move people," Chuck D said.

The Prophets of Rage say they're of no party, but instead endorse a platform of the people -- one against systematic oppression, corporate greed and political corruption.

"The system is broken, and it cannot be fixed by one of the two major parties. I'm not going to just hope that either the racist, misogynistic demagogue that's advocating war crimes in the RNC over there, or the corporatist, hawkish, centrist Democrat over here, are the ones that are going to fix the problems of this country," Morello said.

While this year's Republican National Convention goes on in Cleveland, the band is staging concerts, which they hope will encourage action.

"The world's not going to change itself, that's up to you," Morello said.

Jason Hanley is in charge of education at the Rock 'n' Roll Hall of Fame.

"Music is always getting at what's happening in the world," Hanley said.

He said the Prophets of Rage are part of a musical history that's repeating itself.

"Rock 'n' roll grew up side by side with so much of what was happening," Hanley said.

In the 1960s, Bob Dylan captured the anger of a young wartime generation. Twenty years later, rappers like N.W.A. voiced the frustration -- and oppression -- of urban communities.

"We're still literally today dealing with those exact same issues," Hanley said. "So those lyrics still resonate with us and they still feel a little painful and that's all right."

"This is about peaceful protest, but it's that anger and injustice that sparks people to act, and that's what our music is about," Morello said.

The show Tuesday night was $20 a ticket, with all the proceeds going to a local homeless shelter. Other shows this week have been not just impromptu, but also free.