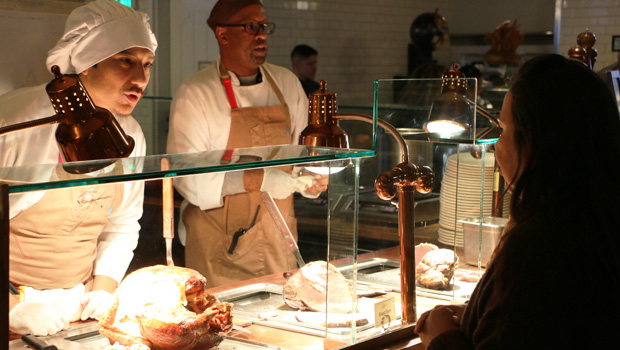 A Los Angeles cafeteria from days gone by is thriving anew. Our Lee Cowan has grabbed a tray:

The trays at Clifton's Cafeteria in downtown Los Angeles are only a tiny detail in a restaurant that feels like you've walked into Throwback Thursday and ordered a side of nostalgia.

"We did a lot of research and we found what the original ones looked like and we had them reproduced," said restaurateur Andrew Meieran. "We have the original Jell-O that people have loved for generations. We call it our neon Jell-O now."

The developer has had a crush on this quirky landmark for as long as he can remember.

"The first time I saw it, I was absolutely astonished. I think it was one of those places where you're transported the moment you walk through the door."

Clifton's is nothing short of an institution. It opened on this very spot in 1935, billed back then as the "world's largest" cafeteria.

In the thick of the Depression it became famous as "The Cafeteria of the Golden Rule."

Its morally-minded proprietor, Clifford Clinton, had a policy to never turn anyone away, whether they could pay for their hot meal or not.

Clinton also wanted to feed the soul, so he turned his dining room into a woodland escape from life's downtown troubles. He built columns of redwood trees sprawling over the tables. There were rocks and shrubs bursting from the walls ... even a tiny chapel.

At its height, Clifton's was serving 15,000 people a day. "170 million for this location from the time it opened until now," said Meieran.

It drew more than the hungry; it drew the artsy, too, from the likes of Walt Disney to Jack Kerouac, who actually wrote about the cafeteria in his novel "On the Road."

But as L.A.'s downtown began to decay, so did Clifford Clinton's dream.

His children tried to keep meals affordable for those on nearby Skid Row, but by 2010 they were considering closing Clifton's doors for the first time in 75 years.

That's when Meieran stepped in.

Cowan asked, "Did anybody tell you that were crazy for trying to do this?"

"I think it's a better question, did anybody tell me I WASN'T crazy for doing this?" Meieran laughed.

More than $10 million later, he's now as much in the cafeteria business as he is into forestry, or so it seems, with a giant tree in the middle of the restaurant.

Yes, a 40-foot Redwood -- a fake one, but it's a good one, growing three stories though an atrium.

There are also herds of taxidermied animals eyeing diners as they eat.

There are cocktail bars tucked away on almost every floor, which Meieran has carefully curated with curiosities that are literally out of this world, such as an actual meteorite. "4.7 billion years old!" said Meieran.

But for all the changes, he left Clifton's woodland dining room much as it was.

Eighty-four-year-old Leatrice Holtzman Exler remembers it from her first visit in 1936, back when going to a cafeteria was considered a big deal.

"My mother wore a hat," she told Cowan. "I mean, in those days, and gloves! Oh no, gloves and a hat were very, very important. They never dressed like we do now."

Since it re-opened early last month, Clifton's massive kitchen has cooked up enough cakes and carrot salad to feed more than 125,000 customers.

And in keeping with its tradition of social responsibility, many of those doing the cooking were themselves in need of a hearty helping of Clifton's-style compassion.

"We've decided to reach out to sober living communities, at-risk youth and other groups, and offer people jobs," said Barbara Jacobs, who is in charge of outreach.

Those hires amount to about 10 percent of Clifton's workforce.

So while it may not be handing out free meals anymore, it certainly hasn't stopping trying to help.

"There's something very humbling about being the person who takes that legacy and brings it to a new generation and a new audience," said Meieran.

Clifton's signature has always been the most comforting of comfort foods: turkey and stuffing. It's served here every day. A reminder that at the "Cafeteria of the Golden Rule," Thanksgiving is a daily occurrence in more ways than one.