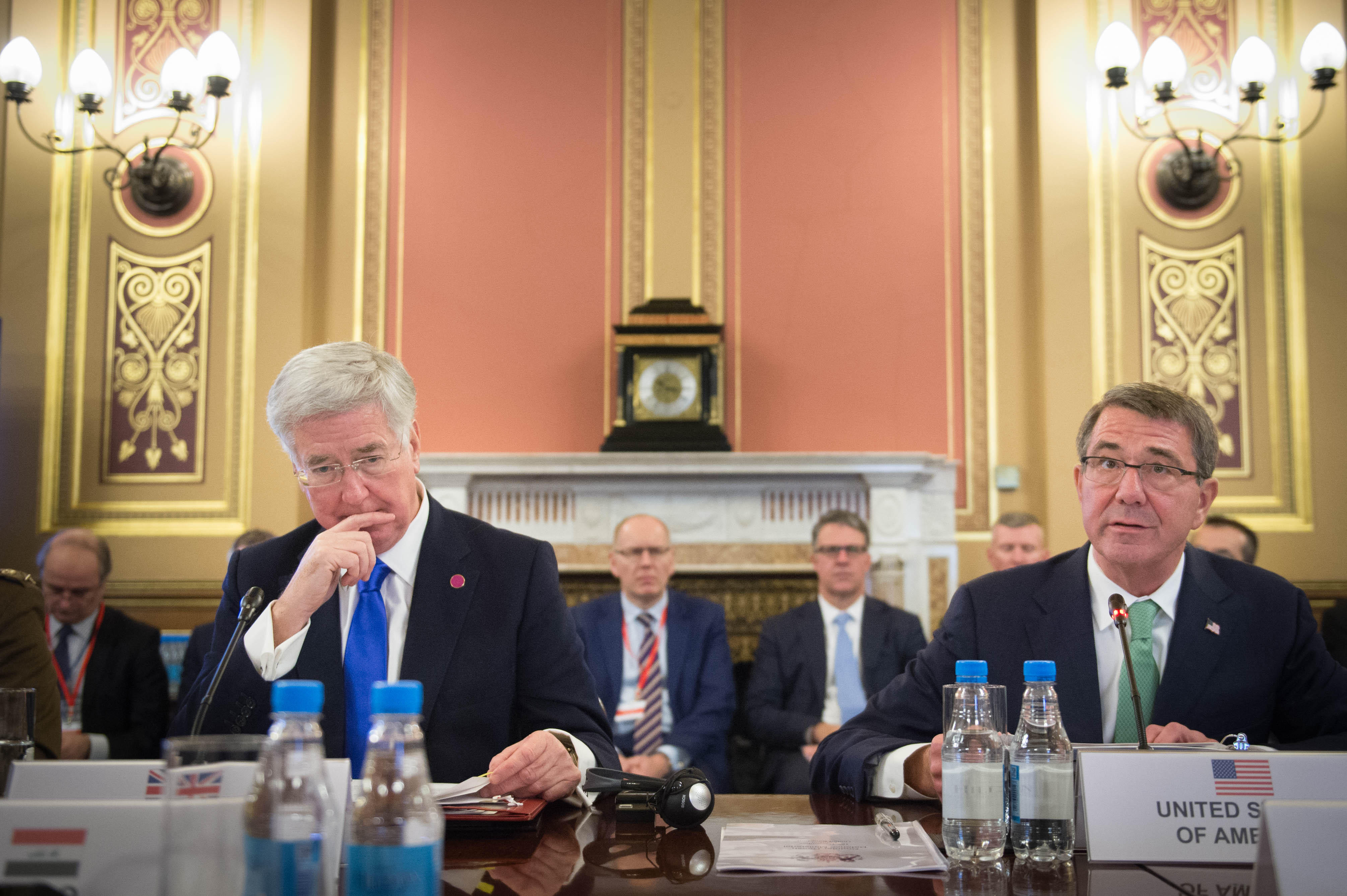 LONDON -- U.S. Defense Secretary Ash Carter expressed confidence Thursday that under the Trump administration the U.S. will remain central to the international coalition fighting the Islamic State of Iraq and Syria (ISIS).

“While I cannot speak for the next administration, I’m confident that based on the results we’re seeing and the strength of our coalition, the United States and its military will continue to be with you as a leading partner in this campaign,” Carter said, in kicking off his final war-planning conference with core members of the coalition.

The meeting got underway against the backdrop of questions about what Donald Trump’s arrival in the White House next month will mean for the future of the coalition.

Closing out a nearly two-week overseas trip that included a stop in Iraq, Carter was meeting with his counterparts from 14 nations. They were to receive an update from Army Gen. Joseph Votel on the battles to retake Mosul, ISIS’ key stronghold in Iraq, and Raqqa, the self-declared ISIS capital in Syria. As head of U.S. Central Command, Votel is the top officer overseeing the counter-ISIS campaign in Syria and Iraq.

The defense officials also were to discuss doing more to train and equip the kinds of local Iraq and Syrian forces, including police and tribal fighters, that will be needed to hold Mosul and Raqqa once, as expected, ISIS is uprooted from those cities. ISIS has held those centers for more than two years.

In his introductory remarks, Carter said the coalition must remain involved in Iraq even after ISIS is driven from Mosul.

“We’ll need to continue to counter not only foreign fighters trying to escape, but also ISIL’s attempts to relocate or reinvent itself,” he said, according to his prepared remarks. “To do so, both the United States and the coalition must remain engaged militarily. In Iraq in particular, we must be prepared to provide sustained assistance to the Iraqi security forces to consolidate security over the rest of the country.”

But the backdrop to Thursday’s conference is deep uncertainty in London, Berlin and other coalition capitals about the implications for the counter-ISIS efforts of a change in U.S. administrations in January. Mr. Trump has criticized President Obama’s approach to fighting the militant group as weak and ineffective, and he has suggested that the U.S. has blindly supported anti-ISIS groups without knowing their true aims.

Among the questions Carter cannot answer: Will Mr. Trump withdraw support for U.S.-backed rebels groups in Syria, who have now lost the city of Aleppo? And if he does, will he join forces with Russia? How might such moves affect public support for the anti-ISIS coalition in Germany and elsewhere?

Though Mr. Obama has tried to work diplomatically with Russia, Syria cease-fire deals have repeatedly collapsed, with the U.S. accusing Moscow of failing to use its influence to prevent Syria’s President Bashar Assad from violating them. Meanwhile, Russia’s military intervention has succeeded in helping Assad reclaim the upper hand. The U.S.-led coalition has avoided direct military action against Assad’s force, focusing instead on supporting local rebels willing to fight ISIS while coupling that effort with aerial bombing in both Syria and Iraq.

Carter was expected to emphasize to his counterparts at the London conference the prominent role that retired Marine Gen. James Mattis will play as the president-elect’s choice to succeed Carter at the Pentagon. Mattis is well-known and widely admired in Europe, having headed NATO’s Supreme Allied Command Transformation from 2007 to 2009, a role focused on preparing the military alliance for security challenges of the future.

Carter has held five other counter-ISIS conferences with coalition partners. Thursday’s will be the first to include Iraq’s army chief of staff, Lt. Gen. Othman al-Ghanami. The other countries represented, in addition to the U.S., are Australia, New Zealand, Belgium, the Netherlands, Canada, Denmark, France, Germany, Italy, Britain, Norway, Spain and Turkey.

In addition to hearing from Votel about the military campaigns in Iraq and Syria, the officials will receive a briefing by Marine Lt. Gen. Joseph Osterman on U.S. efforts to disrupt ISIS’ plans for directing, supporting and inspiring attacks outside of Iraq and Syria. Osterman is deputy commander of U.S. Special Operations Command.

At nearly every stop on his current round-the-world tour, Carter has met with U.S. troops and assured them that the counter-ISIS campaigns are going according to plan. At Aviano air base in Italy on Wednesday, Carter said coalition-backed Arab and Kurdish fighters are within 15 miles of Raqqa, the self-declared ISIS capital in Syria, and that they are “completing the envelopment and ultimately the seizure” of the city.

He also alluded to the uncertain future of the campaign and the coalition.

“We need to look ahead,” he said. “What comes after? And are we getting ready for that?”