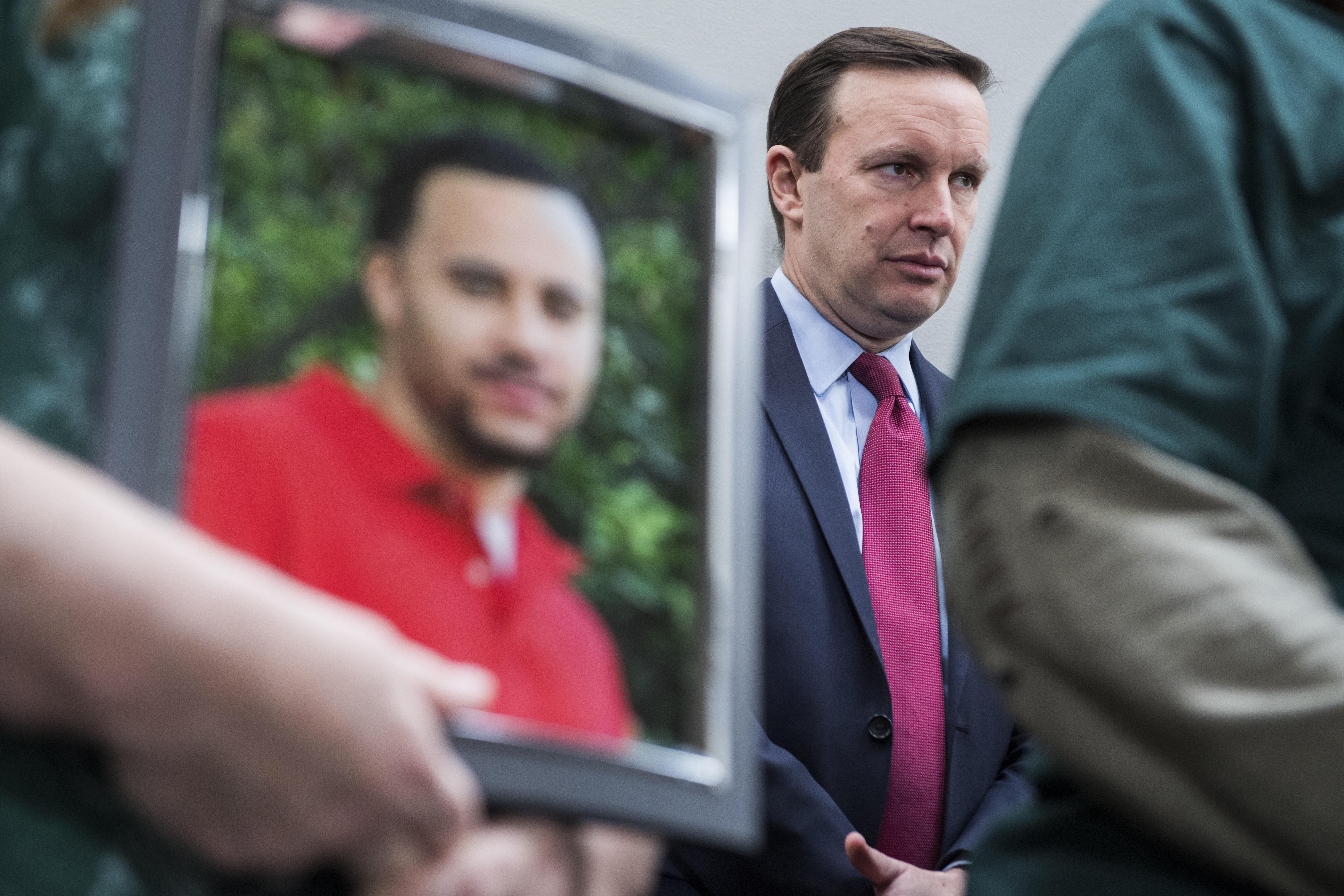 The stark contrast between the rapid action in New Zealand and the lack of federal gun control measures in the U.S. despite multiple mass shootings in recent years was not lost on Democratic Connecticut Sen. Chris Murphy, one of the staunchest advocates for stricter gun laws in Congress.

"It's not just discouraging — it's heartbreaking," Murphy told CBS News. "This is one of those life or death issues. By not keeping these dangerous military-style weapons off the streets, we're choosing to endorse mass murder. I mean, I know that sounds harsh, but I believe it."

Shannon Watts, the founder of Moms Demand Action, which has become one of the most prominent and well-funded gun control advocacy groups in the country, expressed similar frustration. "It's disgusting. And it makes me angry, and I believe it makes our hundreds of thousands of volunteers angry as well," she told CBS News.

"Shame on us for not behaving the way a normal, civilized nation would after a horrific shooting tragedy," added Watts, who founded the organization in the wake of the Sandy Hook massacre, in which a gunman used a semiautomatic assault rifle to kill 26 students and staff at a Connecticut elementary school in 2012.

Why it's easier to enact strict gun laws outside the U.S.

Murphy acknowledged several crucial differences between the political dynamics in the U.S. and New Zealand. For one, New Zealand's parliamentary system of government concentrates greater power with the prime minister, who is selected from the majority party in the legislature, making it easier to get laws passed. Under the U.S. system, the executive and legislative branches are separate and inclined towards gridlock.

"Our founding fathers created a government in which change is purposely difficult," Murphy added.

New Zealand also has a different philosophy regarding gun ownership. Its citizens do not have a constitutional right to keep and bear arms as U.S. citizens do. In America, the Supreme Court has affirmed, through its District of Columbia v. Heller ruling in 2008, that the Second Amendment protects an individual's right to possess a firearm, irrespective of membership in a militia.

And in New Zealand, the national military-style weapons and magazines ban announced by Ardern, which is set to be officially submitted in parliament during the first week of April, is also supported by the main center-right opposition party.

"I don't expect the United States to be able to enact change in the way that a parliamentary government could. But we've had plenty of time to wise up to the consequence of our weak gun laws," Murphy added.

Both Murphy and Watts pointed to the chief obstacle in the U.S. to gun control legislation: the National Rifle Association (NRA) and its allies in Congress.

Gun control has long been a highly contentious issue. Despite multiple mass shootings in which individuals have used military-style semiautomatic weapons to kill dozens in recent years, no major federal gun control measures has passed Congress since the 1990s, with the exception of the Fix NICS Act of 2017. The legislation, which was endorsed by the NRA and signed into law by Mr. Trump, imposed penalties on federal agencies that fail to submit information into the existing background check system.

Several states have adopted stricter gun proposals, including "red flag" laws that allow state courts to lawfully confiscate guns from those who pose a danger to themselves or others, as well as legislation to make it more difficult for domestic violence offenders to purchase firearms, and to expand background checks for gun transactions.

But legislative efforts in Congress to ban assault weapons, bar individuals on the government's no-fly list from purchasing guns, fund gun violence research by the Centers for Disease Control and Prevention (CDC) and implement so-called universal background checks have all failed.

Murphy, who has spearheaded many of these efforts and once led a nearly 15-hour filibuster on the Senate floor to decry current gun laws in the wake of the 2018 Parkland shooting, said the catalyst for the demise of all these proposals, some which have garnered bipartisan support, is the influence gun rights groups like the NRA exert over the GOP.

"The unique feature of the American gun debate is the power of the industry and the lobby," said Murphy. "Even as their position on gun laws becomes more and more unpopular, Republicans in the United States can't break the habit of almost universally supporting the position of the gun industry."

For decades, the NRA has consolidated its power in Washington through persistent lobbying efforts, millions of dollars in campaign contributions, a large membership that votes in elections and even a mass media wing, NRATV. According to Politifact, the group spent just over $203 million on political activities between 1998 and 2017. In the 2016 election alone, the NRA spent over $30 million to help Mr. Trump win the presidency.

While a small number of its contributions go to Democratic lawmakers, the NRA directs most of its financial support to the Republican Party. The organization is a stalwart ally of Mr. Trump, who has vowed that gun rights will never be "under siege" during his presidency. In late 2018, with little push back from the NRA, the Trump administration announced a change in federal regulations to outlaw bump stocks, devices that allow semiautomatic rifles to mimic fully automatic firearms.

The press office of the NRA did not return multiple requests from CBS News for comment.

Like Murphy, Watts, the head of Moms Demand Action, believes the American gun lobby holds disproportionate sway on Capitol Hill. She said the American public is not as polarized as Congress when it comes to new gun control laws.

According to CBS News polling, more than half of Americans have consistently backed stricter gun control laws since 2014. A CBS News survey in February found 56 percent of Americans want laws covering the sale of guns to be more strict, but 75 percent of respondents said they did not believe it was likely the president and Congress would enact gun control reform this year.

"This is about a handful elected leaders who are beholden to the gun lobby," Watts said.

"If we lose our children, we have nothing left to lose"

Democrats have recently embraced gun control as one of their top legislative priorities, with gun safety advocates like Georgia Rep. Lucy MacBeth, whose 17-year-old son was shot to death in Florida, winning competitive suburban districts during the November midterm elections.

In late February, House Democrats used their new majority to pass a bill to expand federal background checks for gun purchases and transfers, the first gun control action to advance in Congress in years. However, the legislation is unlikely to be considered by Senate Majority Leader Mitch McConnell, a Republican from Kentucky, and the White House quickly issued a veto threat against the measure.

Despite repeated setbacks and a lack of action at the federal level, Murphy said he is "completely confident" there will come a time in the near future when "we are going to change our gun laws to reflect where the American public really is." Citing the results of the midterm elections, he said gun control advocates have to ensure "people can't get elected to Congress unless they support common sense measures."

Additionally, Murphy said he will be pushing Democratic White House hopefuls to make the gun law reform an integral part of their agendas.

"This a litmus test issue for the Democratic Party. The Democratic Party isn't going to nominate anybody who doesn't support banning assault weapons and passing universal background checks," he said. "I hope that we nominate a champion — not just an advocate."

Watts said the way forward for the gun control movement, whose influence in American politics continues to grow, is to make sure its message is heard in state legislatures — which, given federal inaction, have become the main drivers of stricter gun control laws in recent years.

Although the military-style weapons and magazines ban in New Zealand served a reminder of unsuccessful federal gun efforts in the U.S., Watts said it is also inspiring her and other activists to continue their work, since they believe "wholesale" gun reform can be implemented in a developed country. Watts, a mother of five and former corporate communications professional, suggested the New Zealand's prime minister's experiences as a woman and a new mother played a "significant" role in her support of a gun law overhaul after the Christchurch massacre.

"We wake up every day and do this work because we know that if we lose our children, we have nothing left to lose," Watts said, referring to fellow mothers.