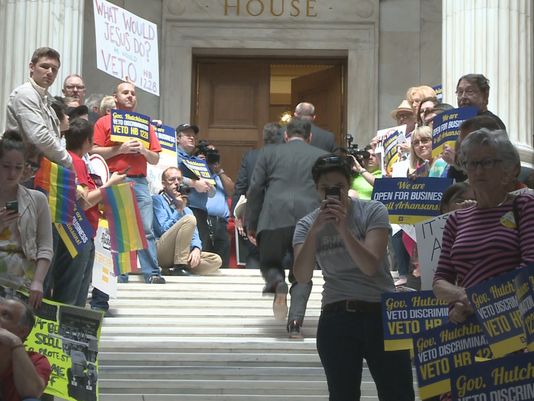 LITTLE ROCK, Ark. -- The Arkansas House of Representatives passed a "religious freedom" bill similar to the controversial measure in Indiana. The bill now heads to Gov. Asa Hutchinson's desk for signing into law.

Hutchinson said that he would approve the measure if it made it to his office, CBS News affiliate KTVH in Little Rock reported. The Arkansas version of the bill -- HB 1228 -- would prevent state and local governments from infringement on someone's religious beliefs unless there were a "compelling" reason.

Like the Indiana law, opponents say it would foster discrimination against the gay and lesbian community.

Also, Apple CEO Tim Cook, who has spoken out publicly against the Indiana law has appealed to Hutchinson to veto the Arkansas bill.

But in a Wall Street Journal op-ed, Gov. Mike Pence insisted the legislation "only provides a mechanism to address claims, not a license for private parties to deny services."