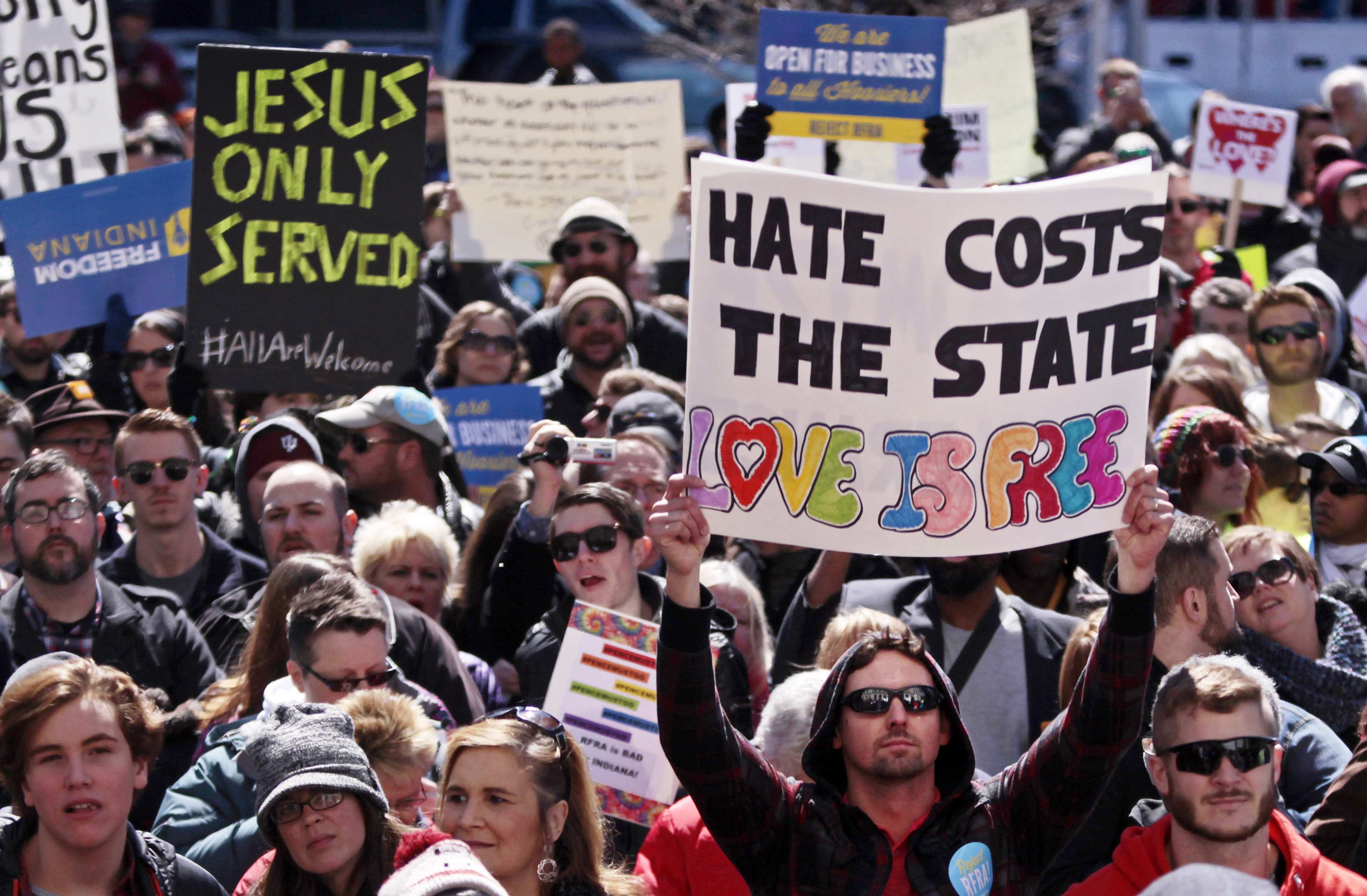 Under fire by critics of Indiana's new Religious Freedom Restoration Act (RFRA) and companies threatening to boycott the state, Governor Mike Pence published an op-ed in the Wall Street Journal Monday night defending the law, which he wrote "has been grossly misconstrued as a 'license to discriminate."'

The ACLU, Apple CEO Tim Cook and other critics believe the Indiana RFRA could be used as a rationale to withhold services from people based on their sexual orientation, since Indiana does not have a state nondiscrimination law in place to protect LGBT citizens.

Pence, in his opinion piece, repeated his assertion over the weekend that Indiana's RFRA reflects other states' laws, as well as the federal law. He wrote that he abhorred discrimination, adding, "If I saw a restaurant owner refuse to serve a gay couple, I wouldn't eat there anymore." And he said, "Indiana's new law contains no reference to sexual orientation. It simply mirrors federal law that President Bill Clinton signed in 1993."

There are reasons the Indiana law has inspired this backlash, however. The statute includes businesses as entities that have the right to assert religious freedom. It states that a person whose exercise of religion has been burdened may make use this as a claim or defense "regardless of whether the state or any other governmental entity is party to the proceeding." Most of the states and the federal law do not use this language.

Further, Pence invoked Hobby Lobby, which went to the Supreme Court to challenge the Obamacare provision that required employer-based health insurance to cover some contraceptive methods in violation of their religious views. It prevailed, and the court relied on the federal RFRA for its ruling in Hobby Lobby's favor.

Pence said that RFRA "only provides a mechanism to address claims, not a license for private parties to deny services."

Pence hasn't been the only politician talking about the RFRA. Several of the potential 2016 presidential candidates have weighed in on the issue.

"I think if they actually got briefed on the law, they wouldn't be blasting this law. I think Governor Pence has done the right thing....This is simply allowing people of faith space to be able to express their beliefs. To be able to be people of conscience. I think once the facts are established, people aren't going to see this as discriminatory at all.

There are many cases where people acting on their conscience have been castigated by the government. And this law simply says the government has to have a level of burden to be able to establish that there's been some kind of discrimination. We're going to need this.

This is really an important value for our country to -- in a diverse country, where you can respect and be tolerant of people's lifestyles but allow for people of faith to be able to exercise theirs."

And he released a statement commending Pence:

"There was a time, not too long ago, when defending religious liberty enjoyed strong bipartisan support. Alas, today we are facing a concerted assault on the First Amendment, on the right of every American to seek out and worship God according to the dictates of his or her conscience. Governor Pence is holding the line to protect religious liberty in the Hoosier State. Indiana is giving voice to millions of courageous conservatives across this country who are deeply concerned about the ongoing attacks upon our personal liberties."

His spokesperson for Our American Revival, AshLee Strong, told CBS News in a statement: "As a matter of principle, Governor Walker believes in broad religious freedom and the right for Americans to exercise their religion and act on their conscience."

Santorum spoke about the Indiana RFRA at George Washington University and also released a statement:

"When Madison drafted our Bill of Rights, he listed the free exercise of religion as first among them because he understood that only a truly free people could exercise a right. This is not the freedom of worship in the halls of a church or synagogue, but the freedom to act out your faith in your daily life. Indiana's law does not discriminate in any way and to claim it does has no basis in fact. What Indiana did has its basis in over 20 years of law that has been upheld time and time again....I commend Governor Pence's efforts to draw a line in the sand against those who are working to denigrate this foundational right and protect citizens from having their deeply held religious beliefs undermined."

"I support the Religious Freedom and Restoration Act because I support religious liberty as granted to us in our Constitution."

"The fact that there are some who think this law in Indiana, which merely makes it clear that local governments must respect our religious liberty, is controversial clearly shows that religious liberty is indeed under attack."

"I will note that President Clinton signed the Religious Freedom and Restoration Act at the federal level and Secretary Hillary Clinton has now said she opposes this law. It would be interesting to learn if Secretary Hillary Clinton silently opposed this protection of religious liberty when President Clinton signed it, or if she has just recently 'evolved' on that. The great irony is that in the minds of today's liberals the only bigotry to be tolerated is their own bigotry against religious beliefs."

"The issue we're talking about here is, should someone who provides a professional service be punished by the law because they refuse to provide that professional service to a ceremony that they believe is in violation to their faith? I think people have a right to live out their religious faith in their own lives. They can't impose it on you and your life, but they have a right to live it out in their own lives. And when you're asking someone who provides professional services to do something or be punished by law that violates their faith, you're violating that religious liberty that they have."

Dr. Ben Carson said, in a statement to Breitbart:

"It is absolutely vital that we do all we can to allow Americans to practice their religious ways, while simultaneously ensuring that no one's beliefs infringe upon those of others. We should also serve as champions of freedom of religion throughout the world."