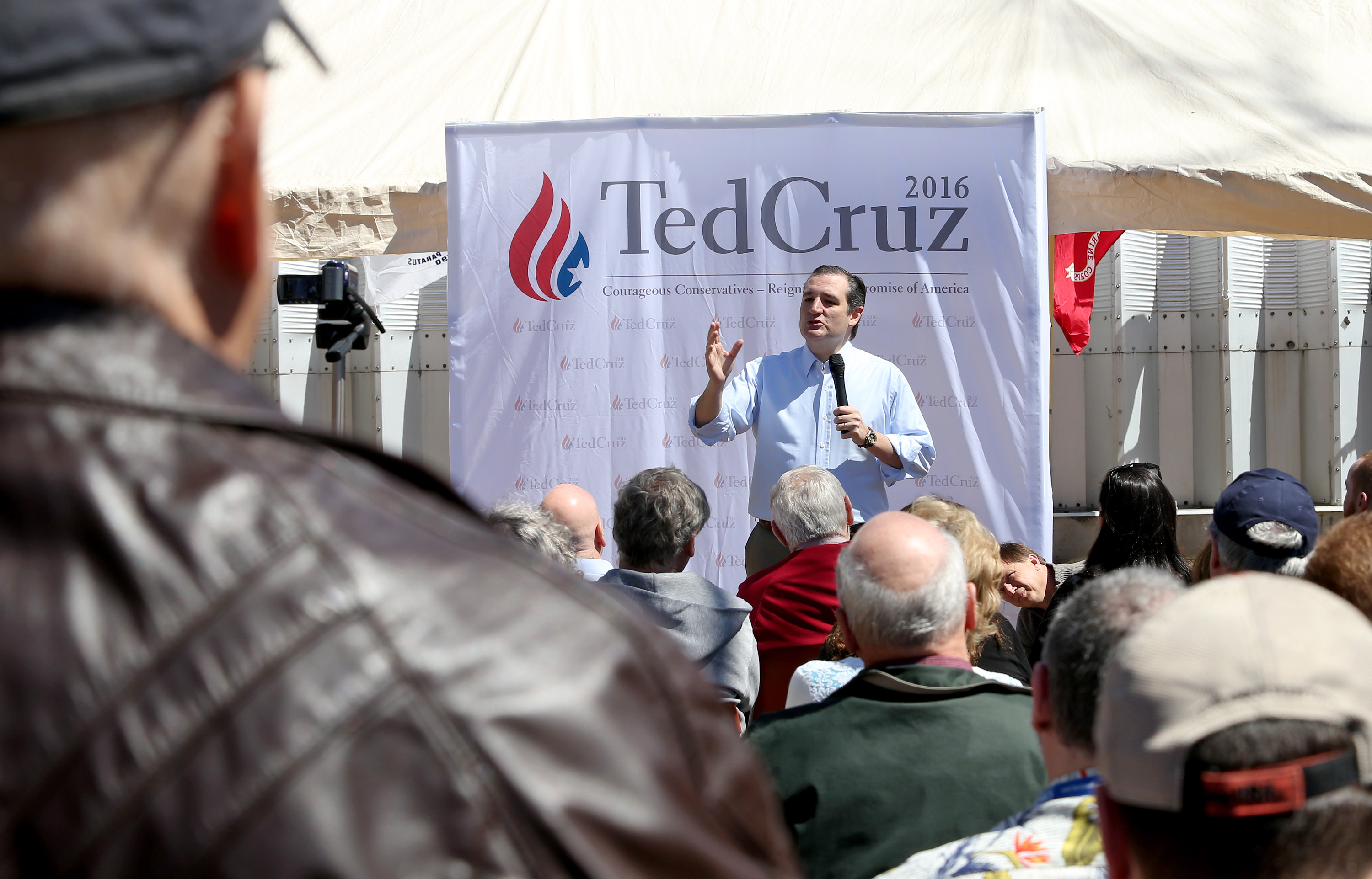 Texas Sen. Ted Cruz was quite outspoken in his opposition to Attorney General nominee Loretta Lynch, who was confirmed by the Senate on Thursday after more than five months' delay.

"My vote on Loretta Lynch is going to be unambiguously no," Cruz, who's running for president, told a conservative gathering in New Hampshire last weekend.

But when the time came for an up-or-down vote on Lynch's nomination, Cruz was a no-show. The Texas senator joined 33 of his Republican colleagues trying to block consideration of the nomination during a cloture vote earlier in the day, and he then left the Capitol, becoming the only senator who didn't participate in Lynch's final confirmation vote.

"He opposes the nomination and voted against her in committee and on cloture, which is the only vote that mattered," Cruz's office said in a statement. "If the Senate could get 60 votes for cloture, it could get 51 for final confirmation."

And besides, Cruz had places to be, people to see. According to RealClearPolitics reporter Rebecca Berg, the senator was scheduled to attend a fundraiser for his presidential bid in Texas at 6 p.m. Thursday.

Cruz's decision spoke to a dilemma faced by all five current senators who have declared (or are considering) a presidential bid: The campaign trail demands enormous sums of time and energy, but they also have important day jobs as members of the world's greatest deliberative body. Striking the right balance can be difficult.

If past is prologue, though, some of these ambitious senators may not be as diligent in their legislative work as voters might expect.

According to GovTrack, a service that monitors legislation and voting records, the percentage of roll call votes all five men have missed during their Senate careers is well above the average of votes missed by their colleagues.

Between the time he took office in January 2013 and April 2015, Cruz missed 85 of 820 roll call votes, or 10.4 percent. That's most than six times the average percentage of votes missed by sitting senators, which stands at 1.5 percent.

Rubio, who took office two years earlier than Cruz, has missed 107 of 1,306 roll call votes in his Senate career, or 8.2 percent.

Paul, who was elected in 2010 like Rubio, has missed 41 of 1,306 votes, or 3.1 percent - a figure that compares favorably to the senate's other GOP presidential aspirants but still remains more than double the institutional average.

Several of the men have also faced scrutiny for their sparse attendance at committee hearings - often dry events that are nonetheless considered invaluable to a legislature's dual tasks of oversight and policymaking.

A Buzzfeed analysis released Wednesday found that, since 2014, Paul has attended only 15 of the 94 hearings held by the Senate Foreign Relations Committee or a subcommittee on which he sits. Twelve of the 94 hearings were closed to the public, so Paul's attendance was not able to be verified.

And according to a Politico analysis released earlier this month, Cruz has been a virtual no-show at hearings of the Senate Armed Services Committee. During his first two years in the senate, Cruz attended only 17 of 50 committee hearings for which transcripts are available.

The charge that any elected official has shirked his or her responsibility can be damning. But the political threat is particularly acute in the case of these lawmakers, who aren't seeking reelection, but rather, a promotion.

Several have attempted an explanation.

"Senator Rubio takes his responsibilities as both a senator and a father seriously. The vast majority of missed votes are when the latter duties take precedent, and he needs to be in Miami for family commitments," Rubio's office told the Miami Herald in a statement in February. "He is one of the only senators with young children who has not moved his family to D.C., and tries to spend as much time in Florida with them as possible. In addition to his parental responsibilities, in recent years he's also had to return to Florida and miss votes due to his mother's health and civic responsibilities like jury duty. Normally when he misses votes, his vote would not have been decisive, but in those instances he tries to submit statements for the record or write a blog post explaining how he would have voted."

Cruz's communications director, Amanda Carpenter, suggested that the duties of a senator can't be captured only through votes and hearing attendance.

"Sen. Cruz remains incredibly active on the issues important to the 27 million Texans he represents and takes care to make sure his constituents know where he stands on these matters," she said in a statement to Politico, adding that Cruz "regularly meets with constituents and Texas organizations, introduces legislation, offers amendments, goes on CODELS, writes letters, issues statements and engages in other actions in his capacity as a U.S. senator."

Paul's staff emphasized that the Kentucky freshman has been no slouch. "Senator Paul is one of the most active members of the U.S. Senate," an aide to the senator told Buzzfeed. "He has made more than 98 percent of the votes in the Senate and authored more than 50 bills and amendments, all the while maintaining a full schedule of meetings with Kentuckians in his office....When schedules conflict, he has chosen to spend his time hearing the thoughts of Kentuckians, and will subsequently, receive a full report of pertinent information that was missed from staff in attendance at the meeting."

But explanations and extenuations, however valid, have a way of getting lost in the din of a political battle. The accusation that lawmakers are neglecting their day jobs has been leveled (successfully and unsuccessfully) at political figures for years.

And sometimes, just showing up isn't enough. Then-Illinois Sen. Barack Obama faced frequent criticism on the 2008 campaign trail about the number of times he voted 'present' as a state lawmaker in Illinois. His Republican critics - and then-Sen. Hillary Clinton - saw the practice as evidence of political expediency on Mr. Obama's part - he didn't want to take a position on sensitive issues, they argued, so he abstained.

Even as president, Mr. Obama has faced criticism about his absences as a senator. GOP strategist Karl Rove, for example, said last year on Fox News that the president might have a firmer grasp of the problems at the Department of Veterans Affairs if he'd been more assiduous about attending committee hearings as a senator.

"These issues about scheduling and the backlog, these were discussed at Senate veterans committee meetings, and I'm not certain he was paying much attention then," Rove said. "He was probably busy out there running for president."

As recently as the 2014 midterm elections, the charge of absenteeism has drawn blood. Then-Sen. Kay Hagan, D-North Carolina, and Mark Udall, D-Colorado, for example, were both criticized for their committee attendance records, and both ultimately lost their bids.

"There is nothing more important than receiving briefings on our national security," Hagan's GOP challenger, Thom Tillis, said at their first debate after observing that the senator missed a meeting of the Armed Services Committee to be able to attend a fundraiser. "Sen. Hagan has failed to do her job."

It's not clear how salient the issue will be in 2016. There's no sign yet that Republicans are preparing to use attendance records to bludgeon their rivals in the primary, for example.

At least one veteran senator, though, suggested the attendance record of some lawmakers might be worth examining.

Sen. John McCain, R-Arizona, said Cruz's performance of his legislative duties is between the Texas senator and his constituents. But according to Politico, McCain added with a wink, "I would imagine that that's an item of consideration for the voters."