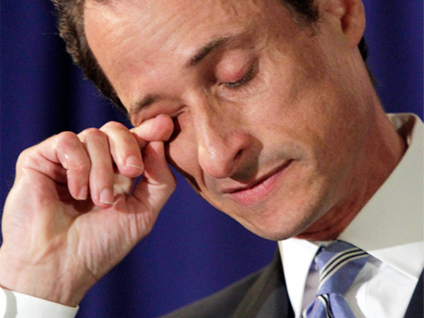 A teary Rep. Anthony Weiner apologized on Monday for having "inappropriate" telephone and email conversations with six women over three years, though he said he did not break any laws and would not step down.

The New York lawmaker admitted he posted a photograph of his bulging crotch on Twitter, saying he had lied when he previously characterized the photograph as a prank.

He also said he had several "inappropriate conversations" that he described as "explicit in nature" with half a dozen other women over three years - including after he married his wife, Huma Abedin, an aide to Secretary of State Hillary Clinton. He said he had not met any of the women.

"I have made terrible mistakes that have hurt the people that I cared about the most, and I am terribly sorry," said Weiner, who held back tears as he made his comments. He added: "I am deeply ashamed of my terrible judgment and my actions."

"If you're looking for some kind of deep explanation for this, I don't have one except to say that I'm very sorry," he said.

Weiner said he and his wife "have no intension of splitting up over this" and that he had not had sex outside of year-old marriage.

"I love her very much, and she loves me," he said, adding: "I am deeply sorry for the pain this has caused my wife Huma, and my family." Weiner called his wife "a remarkable woman."

"She's not responsible for any of this," he said. "This was visited upon her. She's getting back to work, and I apologize to her very deeply."

Weiner, who appeared in a ballroom at a New York City hotel, said he sent the initial photograph as "part of a joke," and that he deleted it in a panic after he realized it had been sent to the public. He said his decision to lie to the public was a mistake.

Weiner, who before the scandal was seen as leading candidate to become the mayor of New York City, said he did not believe he had broken the law and planned to keep his job on Congress.

"I'm not resigning, and I'm going to try very hard to go back to work a better man and a better husband too," he said.

The House Code of Conduct reads in part, "A Member, Delegate, Resident Commissioner, officer, or employee of the House shall behave at all times in a manner that shall reflect creditably on the House."

Pelosi called for an investigation shortly after Weiner's statement.

"I am deeply disappointed and saddened about this situation; for Anthony's wife, Huma, his family, his staff and his constituents," she said. "I am calling for an Ethics Committee investigation to determine whether any official resources were used or any other violation of House rules occurred."

Breitbart said in a statement following Pelosi's comments that he welcomes and "will fully cooperate with an investigation by the House Ethics Committee."

The Ethics Committee would not immediately say whether it was opening an investigation into Weiner's actions, though it was expected to do so.

Weiner could be expelled from the House if two-thirds of members vote to do so. The House has only done so five times in its history, including three expulsions for disloyalty to the union. Weiner could also face censure -- a strong reprimand that requires a simple majority vote. There's no formal consequence to this action, but the member could lose chairmanships and seniority. A less serious punishment would be a formal reprimand of the sort given to Rep. Joe Wilson after his "You Lie" outburst.

Weiner said doesn't believe he used government resources in sending the messages, and that his staff did not know he had done so.

He said he did not know the ages of all the women to whom he had sent messages, saying, "they're all adults, at least to the best of my knowledge."

"I know that I never had any intention to have any interaction with underage women," he added, telling reporters that "I never met these women and never had much desire to."

Asked about future use of his Twitter account, Weiner said: "I don't believe I'll use it the same way, that's for sure."

Conservative publisher Andrew Breitbart published a series of alleged photographs of the congressman Monday that he said Weiner emailed to an unidentified young woman, including a shirtless photograph. In addition, tabloid website RadarOnline.com posted a sexually explicit Facebook exchange allegedly involving Weiner and an unidentified woman that the website claimed took place in March.

And Weiner's admission came as ABC News prepared to release an interview with 26-year-old Meagan Broussard, who provided the news outlet with "photos, emails, Facebook messages and cell phone call logs that she says chronicle a sexually-charged electronic relationship with Weiner that rapidly-evolved for more than a month, starting on April 20, 2011."

Last week, a photograph appeared in Weiner's Twitter feed showing a bulging crotch in grey underwear. Weiner said the photograph was "a prank, a hoax" but did not deny that the picture was of him. Breitbart alleges that Weiner used a personal Yahoo email account to send that same photo to another woman.

Breitbart made a surprise appearance at Weiner's press conference before it began, saying he was there "coincidentally" after he had been set to be interviewed nearby. (He was asked to take the podium by reporters present for the event after speaking to a small group in the back of the room.) He said he has "at least one more photo" of Weiner, which he describes as "x-rated," though he said in response to a question from CBS News that he does not intend to release it because he wanted to "save his family."

"I'm trying to do the decent thing and not release the photo," he added, though he suggested he could reconsider depending on Weiner's comments and actions going forward.

"I've seen a lot of the congressman's body," said Breitbart, who answered questions for about 12 minutes. "He is in very good shape."

Breitbart asked Weiner and members of the liberal blogosphere to apologize "for a blame the messenger strategy" in the wake of the release of the initial photo. (Weiner apologized to Breitbart, among others, in the press conference.) Breitbart also complained that the mainstream media has repeatedly questioned his credibility over his role in edited video controversies involving Shirley Sherrod and the ACORN undercover stings.

"I'm here for some vindication," he said. Appearing exasperated, Breitbart denied he was out for any sort of revenge and seemed incredulous that his motives were being questioned.