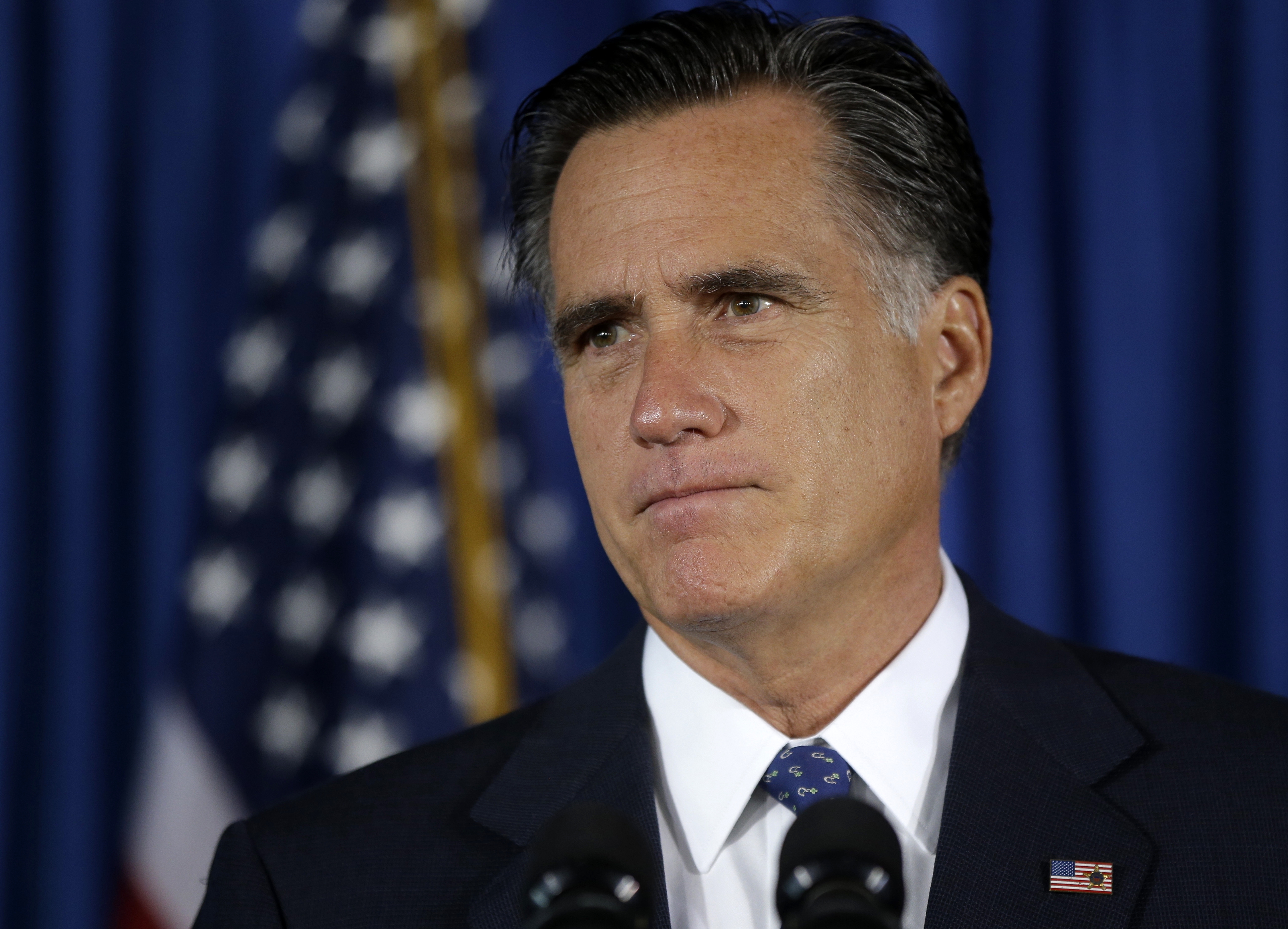 (CBS News) In a press conference Wednesday addressing the recent violence in Egypt and Libya, Republican presidential candidate Mitt Romney doubled down on his criticism of the Obama administration's handling of the attacks, calling its response a "terrible course" that signaled the administration is standing "in apology for our values."

The Romney campaign put out a statement late last night -- on September 11 -- criticizing the president in connection with the violence. After he released the statement, it became known that four Americans, including U.S. Ambassador to Libya J. Christopher Stevens, were killed after an angry mob at the U.S. consulate in Benghazi in response to the production of an amateur anti-Islam film.

Speaking at a brief media availability Wednesday morning, the candidate defended his criticism, particularly targeting the White House over a statement from the Egyptian embassy that condemned "the continuing efforts by misguided individuals to hurt the religious feelings of Muslims -- as we condemn efforts to offend believers of all religions."

"I also believe the administration was wrong to stand by a statement sympathizing with those who had breached our embassy in Egypt, instead of condemning their actions. It's never too early for the United States government to condemn attacks on Americans and to defend our values."

Romney acknowledged that "the White House distanced itself last night from the statement, saying it wasn't cleared by Washington." But even though he said he had the "exact same reaction" as the White House in doing so, he argued that because the statement was released the administration is sending "mixed signals" to the world.

"The White House also issued a statement saying it tried to distance itself from those comments and said they were not reflective of their views. I had the exact same reaction. These views were inappropriate. They were the wrong course to take when our embassy has been breached by protesters," he said.

When asked what the White House did wrong, he argued, "it's their administration."

President Obama and Secretary of State Hillary Clinton have strongly condemned the attacks in separate appearances Wednesday, and Mr. Obama pledged that the United States is working with the Libyan government to bring to justice the attackers.

Obama spokesman Ben LaBolt, meanwhile, said Tuesday night he was "shocked" that the Republican nominee would use the occasion for a political attack.

"We are shocked that, at a time when the United States of America is confronting the tragic death of one of our diplomatic officers in Libya, Governor Romney would choose to launch a political attack," Obama spokesman Ben LaBolt said in a statement.

Republicans were seemingly slow to take up Romney's line of attack in light of the tragedy: Aside from RNC Chair Reince Priebus, who called the Obama administration "sad and pathetic" in a Tweet, there was little mention of the president in a flurry of Republican statements released Wednesday morning.

Even some conservatives seemed to take issue with Romney's column: Columnist Peggy Noonan said on Fox News that she didn't feel Romney had been doing himself "any favors" in addressing the attacks.

I was thinking as he spoke, I think I belong to the- to the old school of thinking: That in times of great drama and in heightened crisis and in times when something violent has happened to your people, I always think discretion is the better way to go," Noonan said. "When you step forward in the midst of a political environment and start giving statements on something dramatic and violent that has happened, you're always leaving yourself open to accusations that you are trying to exploit things politically. I don't feel that Mr. Romney has been doing himself any favors, say, in the past few hours, perhaps since last night. Sometimes when really bad things happen, when hot things happen, cool words or no words is the way to go."

Democrats, meanwhile, seized on Romney's remarks as "reckless" and evidence that he lacks a comprehensive understanding of foreign affairs.

"Governor Romney's comments are about as inappropriate as anything I've ever seen at this kind of a moment," said Democratic Sen. John Kerry, chairman of the Senate Foreign Relations Committee. "They are flat wrong. They demonstrate an insensitivity and lack of judgment about what is happening right now. To make those make those kind of statements before you even know the facts, before families have been notified, before things have played out, is really not just inexperienced, it's irresponsible, it's callous, it's reckless and I think he ought to apologize and I don't think he knows what he is talking about, frankly. It's that simple."

Darrell West, the vice president of Governance Studies at the nonpartisan Brookings Institution, told CBSNews.com he was surprised to see the Romney campaign double down on the attacks this morning.

"I saw the statement he put out last night and I thought it was maybe a low-level press person who put this out and today they would correct the damage," he said. "Instead they're digging the hole deeper. I mean you can't really play partisan politics in U.S. foreign policy."

Some question the assertion, however, that politics should be off-limits in addressing issues of national security -- even when tragedy is involved.

"I think to some degree this is just a question of what the American people think and what is their reaction to the administration's handling of this and to Romney's criticism. I think the average American will be shocked at the murder of an ambassador, which happens very, very rarely, and will wonder how did this happen? How could this have happened?" said Elliott Abrams, currently a senior fellow for Middle Eastern Studies at the Council on Foreign Relations, who served under Ronald Reagan and as a senior director of the National Security Council to George W. Bush. "There are a lot of questions to ask and I think most Americans will wonder what happened, so I don't think you can say the only appropriate remark is to pay tribute to Chris Stephens and nothing more can be said."

Republican strategist Trey Hardin called the notion that Romney was exploiting the situation for political gain "out of line" and said the comments were "absolutely appropriate."

"From a protocol standpoint, he is a major voice in this country. We have a two-party system and he is the leader of that party right now," Hardin said.

From a political standpoint, Romney stands to benefit from his remarks if he's able to successfully make the case to independent and undecided voters that the Obama administration's response is reflective of broader policy weaknesses.

"There is a perception from some out there that the Obama administration is not a very flag-waving U.S.A. rah-rah administration," said Ian Bremmer, president of the nonpartisan Eurasia Group, a global political risk research and consulting firm."I think Romney had a small opening. There's clearly a theme: Is Obama an apologist for other countries? Is Obama unpatriotic? Even if it's a small theme its one they continue to use. He's not going to win the election on that and he's not going to lose it either."

Brian Montopoli contributed to this report.