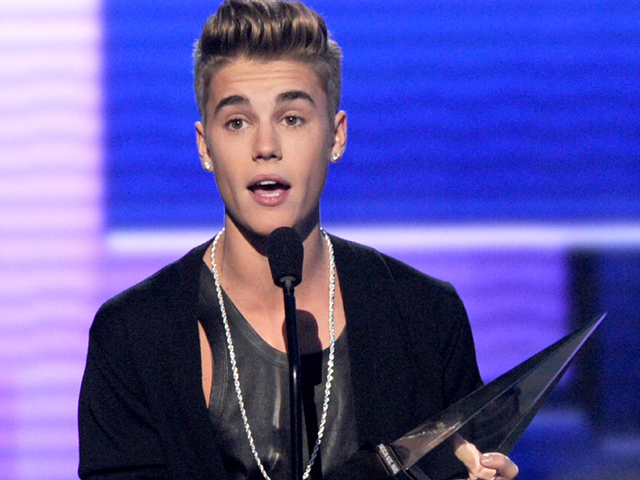 Justin Bieber was named favorite artist of the year Sunday, beating out Rihanna, Katy Perry, Maroon 5 and Drake for the top prize at the American Music Awards. It was his third award of the night.

The 18-year-old teen idol pulled his mother, Pattie Malette, onstage to help him accept the award. "This is my mom," he said. "She's little, but she's beautiful." He thanked her for believing in him.

Bieber won the very first award of the night -favorite pop/rock male artist - and he accepted with the comment: "I want to say this is for all the haters who thought that I was just here for one or two years. I feel like I'm going to be here for a very long time."

When he returned to the stage to claim his award for favorite pop/rock album (for his "Believe"), he corrected what he saw as an oversight and thanked his long-time mentor, Usher, among others.

Taylor Swift won her fifth consecutive award for favorite country female artist. "This is unreal. I want to thank the fans. You guys are the ones who voted on this," she said.

Usher opened the ceremony. Dressed in black leather pants, a black T-shirt and red high tops, the singer stepped onto the stage from a swirl of smoke and launched into a medley of songs, including "Numb," "Climax" and "Can't Stop, Won't Stop."

Minaj performed her new single "Freedom." She was in an all-white get-up, including fur coat and pink hair. The scene was ghostly and snowy, as a choir also in white joined her onstage. One background singer stole the performance, belting semi-high notes as Minaj looked on.

Swift gave a masquerade-themed performance of the pop song "I Knew You Were Trouble." She sang onstage in a light dress while dancers wore mostly black. But then she changed into a red corset and black skirt, matching their dark mood. She even danced and sang on the floor as lights flickered throughout the performance.

Kelly Clarkson also hit the stage, making a nod to her "American Idol" roots with a number on her dress and three people in judge chairs looking on as she sang "Miss Independent." Then she went into "Since U Been Gone," "Stronger" and "Catch My Breath."

"American Idol" judge Randy Jackson made a plea for Red Cross donations to help victims of Sueprstorm Sandy, which hit the Northeast on Oct. 29 -30.

Before the show started, stars walked a red carpet. Party girl Ke$ha was glammed up on the red carpet, rocking long, flowy blonde hair and a light pink dress. Nicki Minaj and Christina Aguilera were blonde bombshells, too: Minaj's hair was busy and full of volume and she sported a neon sleeveless dress. Aguilera wore a blonde bob cut and in purple dress that matched her eye shadow.

The highlight of the awards show, which is being broadcast live on ABC, are performances by such stars as Justin Bieber Taylor Swift, Christina Aguilera, Carrie Underwood, Kelly Clarkson, Pink, Pitbull, No Doubt, Usher and Carly Rae Jepsen.

Stevie Wonder, an 11-time AMA winner, provided the soundtrack for a tribute to Dick Clark, who created the American Music Awards in 1973 to pay tribute to modern musicians. Ryan Seacrest introduced the performers.

Singer Brandy paid tribute to the late Whitney Houston, who died from accidental drowning on the night before the Grammy Awards in February.

This year marked the creation of the new Electronic Dance Music Category. David Guetta beat out nominees Calvin Harris and Skrillex for the prize. "It's wonderful also to see electronic music recognized at this level in the U.S.," Guetta said in a taped acceptance speech.

Sunday's show from the Nokia Theater in Los Angeles marks the AMA's 40th anniversary. American Music Awards nominees were selected based on sales and airplay, and fans chose the winners by voting online.