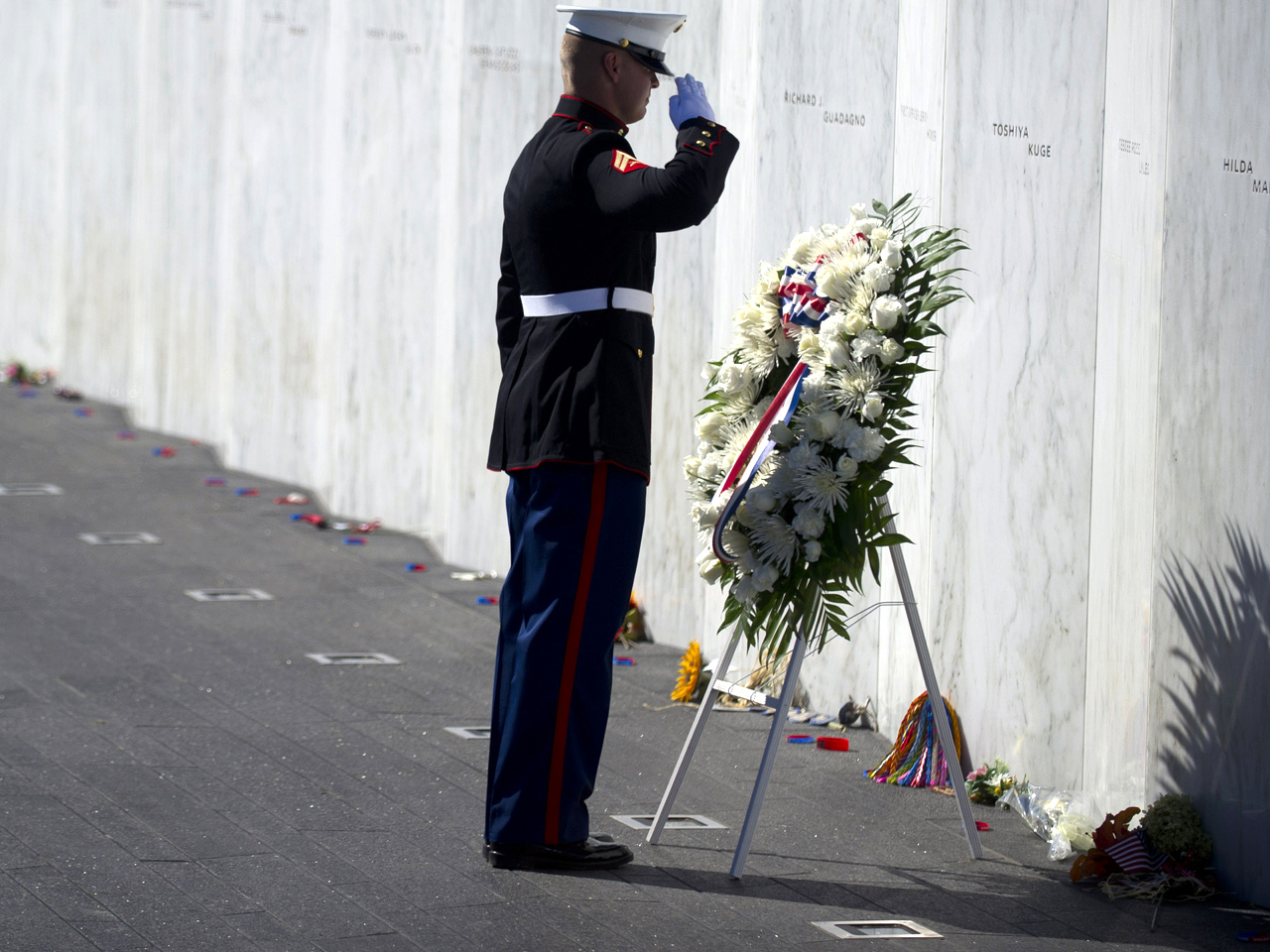 (CBS/AP) NEW YORK - Americans marked the 11th anniversary of the Sept. 11, 2001, terror attacks Tuesday in familiar but subdued ceremonies that put grieving families ahead of politicians and suggested it's time to move on after a decade of remembrance.

As in past years, thousands gathered at the World Trade Center site in New York, the Pentagon and Shanksville, Pa., to read the names of nearly 3,000 victims killed in the worst terror attack in U.S. history.

But many felt that last year's 10th anniversary was an emotional turning point for public mourning of the attacks. For the first time, elected officials weren't speaking at the ceremony, which often allowed them a solemn turn in the spotlight, but raised questions about the public and private Sept. 11. Fewer families attended the ceremonies this year, and some cities canceled their remembrances altogether.

"I feel much more relaxed" this year, said Jane Pollicino, who came to ground zero Tuesday morning to mourn her husband, who was killed at the trade center. "After the ninth anniversary, that next day, you started building up to the 10th year. This feels a lot different, in that regard. It's another anniversary that we can commemorate in a calmer way, without that 10-year pressure."

Meanwhile, Marisol Torres clutched a photo of her cousin, New York firefighter Manuel DelValle Jr., as she walked into the memorial plaza in lower Manhattan for the somber ceremony. Torres told CBS New York station WCBS-TV the ceremony is as tough as it was after the first year.

"I wish I could say it gets easier, but it doesn't," said Torres. "I think you learn to live with your grief so in some sense it gets easier but you sort of learn to carry that around with you."

DelValle was 32 years old when he was killed in the collapse of the World Trade Center.

As bagpipes played at the year-old Sept. 11 memorial in New York, family clutching balloons, flowers and photos of their loved ones bowed their heads in silence at 8:46 a.m., the moment that the first hijacked jetliner crashed into the trade center's north tower. Bells tolled to mark the moments that planes crashed into the second tower, the Pentagon and a Pennsylvania field, and the moments that each tower collapsed.

President Obama and first lady Michelle Obama observed the moment in a ceremony on the White House's south lawn, and then laid a white floral wreath at the Pentagon, above a concrete slab that said "Sept. 11, 2001 — 937 am." He later recalled the horror of the attacks, declaring, "Our country is safer and our people are resilient."

(At left, watch the president's speech at the Pentagon)

Video: The Obamas have moment of silence for 9/11 victims

Victims' families in New York tearfully read the names of the attack victims, often looking up to the sky to talk to their lost loved ones."Rick, can you hear your name as the roll is called again? On this sacred ground where your dust settled?" said Richard Blood, whose son, Richard Middleton Blood, Jr., died in the trade center's south tower. "If only those who hear your name could know what a loving son and beautiful person you grew to be. I love you, son, and miss you terribly."

Thousands had attended the ceremony in New York in previous years, including last year's milestone 10th anniversary. A crowd of fewer than 200 swelled to about 1,000 by late Tuesday morning, as family members laid roses and made paper rubbings of their loved ones' names etched onto the Sept. 11 memorial. A few hundred attended ceremonies at the Pentagon and in Pennsylvania.

Commuters rushed out of the subway and fewer police barricades were in place than in past years in the lower Manhattan neighborhood surrounding ground zero. More than 4 million people in the past year have visited the memorial, which became more of a public space than a closed-off construction site. (At left, watch a time-lapse video of One World Trade Center)

Families had a mixed reaction to the changing ceremony, which kept politicians away from the microphone in New York for the first time. Charles G. Wolf, whose wife, Katherine, was killed at the trade center, said: "We've gone past that deep, collective public grief." But Pollicino said it's important that politicians still attend the ceremony.

"There's something missing if they're not here at all," she said. "Now, all of a sudden, it's 'for the families.' This happened to our country — it didn't happen only to me."

And Joe Torres, who put in 16-hour days in ground zero's "pit" cleaning up tons of debris in the days after the attacks said another year has changed nothing for him.

"The 11th year, for me, it's the same as if it happened yesterday," said Torres, whose sister-in-law was killed in the attacks. "It could be 50 years from now, and to me, it'll be just as important as year one, or year five or year ten."

In Jersey City, N.J., across the Hudson River from Lower Manhattan, Lynne Russo Linale came to Liberty State Park Monday to remember her brother, one of 749 New Jerseyans killed in the attacks.

"It's as if it was the first anniversary and every one in between," Russo Linale told WCBS-TV.Like 2001, this Sept. 11 was on a Tuesday, for the second time since the attacks. The early fall weather was much like the morning on 2001.

Mayor Michael Bloomberg, the governors of New York and new Jersey and former Mayor Rudy Giuliani all attended New York's ceremony. Vice President Joe Biden spoke to hundreds at the Flight 93 Memorial in Pennsylvania, saying the ceremonies were a reminder that the country hasn't forgotten them.

"My personal prayer for all of you is that in every succeeding year, you're able to sing more than you weep, and may God truly bless you and bless the souls of those 40 incredible people," Biden said.

The Obamas planned later to visit wounded soldiers at Walter Reed Army Medical Center. The U.S. terror attacks were followed by wars in Afghanistan and Iraq, where the U.S. military death toll years ago surpassed the 9/11 victim count. At least 1,987 U.S. troops have died in Afghanistan and 4,475 in Iraq, according to the Pentagon.

Allied military forces marked the anniversary at a short ceremony at NATO's headquarters in Kabul, Afghanistan with a tribute to more than 3,000 foreign troops killed in the decade-long war.

"Eleven years on from that day there should be no doubt that our dedication to this commitment, that commitment that was seared into our souls that day so long ago, remains strong and unshaken," said Marine Gen. John Allen, the top commander of U.S. and coalition troops.

There was little politics on an election-year anniversary, with Mr. Obama and Republican challenger Mitt Romney pulling negative ads and avoiding campaign rallies. Romney shook hands with firefighters in Chicago and was addressing National Guard members in Nevada. Most ceremonies focused on grief and memory, but there was still a touch of politics from the podium.

"We would like to thank President Obama and (Navy) Seal Team 6 for what they did for this country," said Angella Whyte, referring to the U.S.-led raid that killed al Qaeda leader Osama bin Laden last year.

Other ceremonies were held across the country — from New York's Long Island, where hundreds wrote messages to their loved ones on a memorial, to Boston, where more than 200 people with ties to Massachusetts were remembered. But some cities scaled back — Middletown, N.J., which lost 37 residents, held a small, silent ceremony instead of previous events with speeches and music. The New York City suburb of Glen Rock, N.J., where 11 people were killed, did not hold a memorial this year for the first time.

"It was appropriate for this year — not that the losses will ever be forgotten," said Brad Jordan, chairman of a Glen Rock community group that helps victims' families. "But we felt it was right to shift the balance a bit from the observance of loss to a commemoration of how the community came together to heal."

The memorial foundation announced this summer that politicians wouldn't be included this year, to separate politics from the ceremony. But others said keeping elected officials off the rostrum smacked of ... politics. And several said they were unwilling to let go.

"Coming here, it's like ripping off a Band-Aid," said Yasmin Leon, whose sister was killed at the trade center. "You rip it off and the wound is opened again. But you keep coming back anyway."

And at ground zero, family members reading their loved ones' names said the passage of time did not change their grief.

"Mark, they say time heals all wounds. It's not true, Mark," said Joanne Hindy, whose nephew died in the north tower. "There's a void in all our lives because this that will never ever be filled or healed."