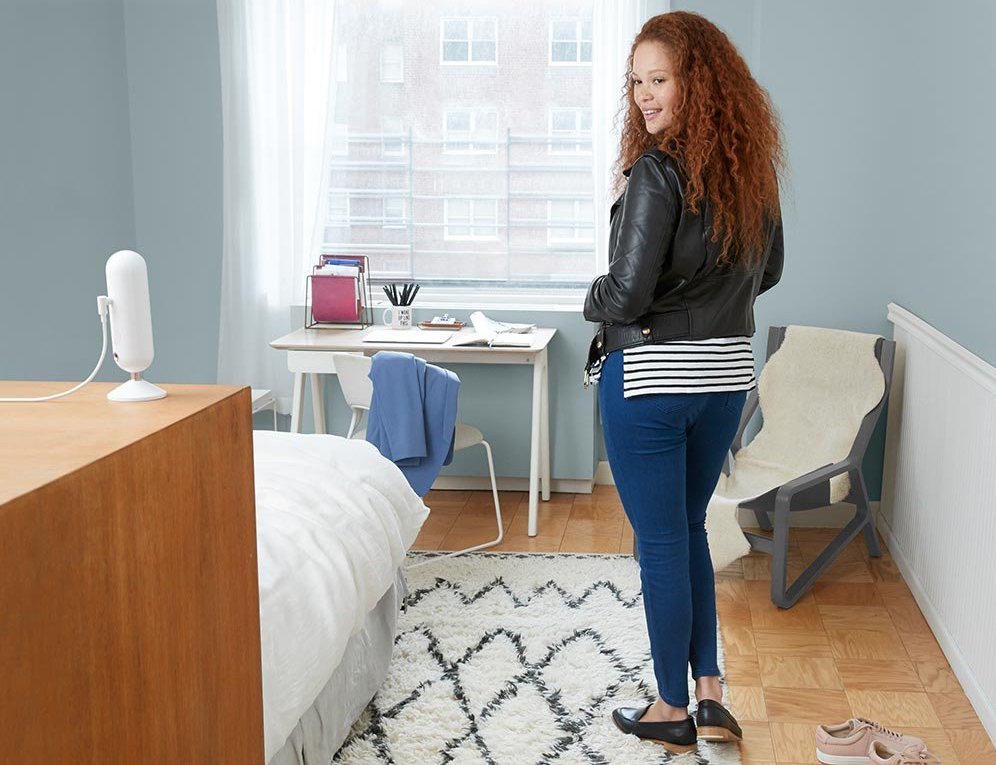 Amazon debuted the "Echo Look" on Wednesday, a $200 device with a built-in camera designed to allow users to take selfies, organize their wardrobes, and solicit style advice from friends.

But as Amazon celebrates the debut, privacy advocates are warning that Amazon Echo Look could potentially peer into users' most intimate moments at home.

Amazon's Echo Look is essentially an updated version of the personal assistant device Echo — which allows users to read the news, set alarms, get traffic and weather reports, control their other smart home devices, etc. — except this time there's a built-in camera.

The Echo Look is being marketed as a fashion assistant. With the words "Alexa, take a picture" or "Alexa, take a video," the Echo Look will take full-length photos and videos. The device's camera comes with LED lighting, depth-sensing technology, and automatic background blur.

Users can then use a companion app to swipe through the photos and video, and send looks to friends. Amazon also rolled out a new app feature called "Style Check," which gives users advice if they're stuck between two outfits. Style Check is powered by both machine learning algorithms and input from style specialists, Amazon says.

Of course, questions about privacy and security abound as Amazon asks users to invite this camera into some of their most private moments: trying on clothes in their own bedrooms and bathrooms.

Speaking to CNET, Jackdaw Research analyst Jan Dawson suggested that it's possible the Echo Look's built-in camera and audio capabilities could potentially be used for other things, such as surveillance and video communication.

"There's lots of stuff you can do once you've got a connected camera in the home," Dawson said.

Forbes writer Curtis Silver cautioned that the future of technology is not always brighter than the past.

"How is spending $200 to put an IoT [Internet of Things] camera in your bedroom the future of technology?" Silver wrote. "It's the future alright, the future of the end of whatever privacy you though you had left and you're paying for it to be removed from your life."

Silver painted a hypothetical picture of where the Echo Look might lead consumers eventually.

The Echo only records audio when it's enabled by a so-called "wake word" (i.e. "Alexa...") or through a dedicated app, according to Amazon. When it's recording, the device light turns blue. There's also a button that can be used to turn off audio completely.

All audio and video goes to the cloud, where it appears to remain indefinitely.

In an interview with TechCrunch, Amazon addressed the latest wave of security concerns.

"Designated Amazon personnel may view photos and video to provide and improve our services, for example to provide feedback through Style Check," Amazon said. "We have rigorous controls in place to restrict access to these images. We do not provide any personal information to advertisers or to third party sites that display our interest-based ads."

The biggest online apparel retailer in the country, Amazon has become a major force in fashion. It's expected to triple its share of the U.S. apparel market from 2015 to 2020, according to research from Morgan Stanley.

Couple that with the success of Amazon's personal devices — customers are projected to spend $2.1 billion on smart speakers like the Amazon Echo by the year 2020, according to a recent report — and it's not surprise that Amazon is making bold investments at the intersection of fashion and smart home technology.

For now, the Echo Look is available by invitation only to select U.S. customers, CNET reported.