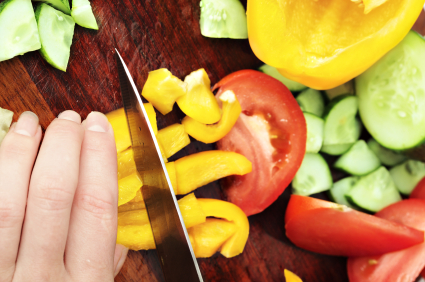 Amyotrophic lateral sclerosis (ALS), more commonly known as Lou Gehrig's disease, is a neurological disease that progressively causes nerve cells to waste away and die, leading to devastating effects on the body. New research suggests that a diet full of antioxidant-rich, brightly-colored vegetables may play a role in preventing the deadly disease.

"ALS is a devastating degenerative disease that generally develops between the ages of 40 and 70, and affects more men than women," senior study author Dr. Alberto Ascherio, professor of epidemiology and nutrition at Harvard School of Public Health in Boston, said in a written statement. "Our study is one of the largest to date to examine the role of dietary antioxidants in preventing ALS."

Ascherio and his team analyzed data from five long-running studies that collectively contained more than one million participants. Nutrition habits and presence of health problems examined closely by researchers to see if food consumption had an impact on ALS development. Previous studies suggest that individuals with a high intake of antioxidants, in particular vitamin E, may be less likely to develop ALS.

The researchers found that overall, people who took in high levels of carotenoids through their diets were less likely to have ALS than people who had diets low in the nutrients. Carotenoids are antioxidant compounds that give fruits and vegetables their red, yellow, bright orange or deep green colors. Common examples of carotenoids include beta carotene -- found in foods like sweet potato, carrots and squash -- and lycopene, a carotenoid found in tomatoes. Some carotenoids, such as beta carotene, convert into vitamin A in the body, according to the University of Maryland Medical Center, while others can increase levels of vitamins C and E.

The new study showed that people whose diets were higher in beta-carotene and lutein had a lower risk of developing ALS. Lutein is a type of oxygen-rich carotenoid called a xanthophyll, which is found in deep green vegetables like kale and broccoli.

Researchers did not find evidence of reduced ALS risk in people who ate diets rich in vitamin C, lycopene and beta-cryptoxanthin, a carotenoid found in sweet peppers and oranges.

People who took in more total carotenoids were found to be more likely to exercise, have an advanced degree, and consume more vitamins overall.