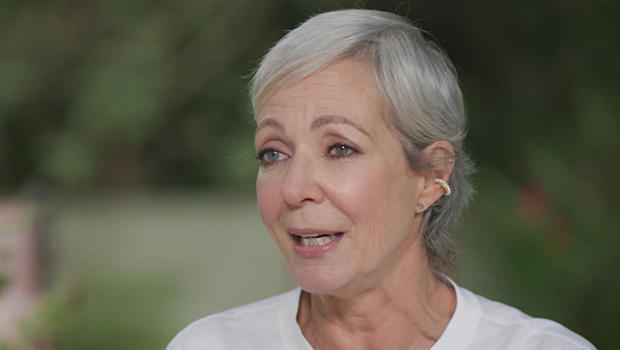 If she had her way, Allison Janney would spend a lot more time at her L.A. home with her dogs.

"So, you like being home, you're a homebody?" asked correspondent Tracy Smith.

But it was a rare moment of quiet in a career that has been anything but.

You might remember Janney as press secretary C.J. Cregg on TV's "The West Wing." But for the past eight years she's been the mom in "Mom," the hit comedy on CBS … and she was as surprised as anyone when she learned this season would be her last.

"Yeah, it was a shock," she said. "I have my own theories, but I've been told not to express them. But listen, eight years is a great long run for a show."

Her character, Bonnie Plunkett, is a woman recovering from addiction, and her show's become something of a beacon to others who struggle with addiction issues in real life.

Smith said, "This show has had a deep effect on people."

"Yeah, you know, it's one thing to be part of a show that entertains, which in and of itself is a wonderful thing," Janney said. "But to also have an impact on people who are in recovery, or people who have loved ones or family members who are going through it, to make recovery a more approachable option."

To watch a trailer for the series finale of "Mom," which airs Thursday, May 13, click on the video player below:

The final episode of "Mom" will air later this week, and that makes her kind of uneasy. "I hate change," she said. "It makes me … I get afraid – I always have – to let something go and not know what's next. I think the biggest thing I need to learn how to say is no."

"You're not good at saying no?" asked Smith.

But look what can happen when Allison Janney says yes: In 2017's "I, Tonya," she was so convincing as Tonya Harding's mother, Lavonda, it looked like the role had been written for her, which in fact it was, by her good friend, screenwriter Steven Rogers.

But at the time, Janney was overbooked.  "I was telling Steven, 'Honey, you may have to make this movie without me, because I don't think it's gonna work.'"

From "I, Tonya," with Margot Robbie, and language not suited to "Sunday Morning":

And it paid off big, with an Oscar for Best Supporting Actress.

"I love that I have an Oscar," Janney said. "I never thought it was gonna be possible for me. Truly, at a certain point I just sort of gave up on that dream."

"So, where do you keep these things?" asked Smith.

"Well, the Oscar's moved around, depending on who's coming over! Well, I should have put it just, you know, back there."

Wherever her statue is, it's dedicated to her brother, Hal Janney, who lost his own battle with addiction ten years ago. But his big sister says she still calls him now and again.

"My favorite time to talk to him was when I was in the car driving someplace, so I always think of him when I'm in the car," Janney said. "And I still have his phone number, and I dial it."

"You dial his phone number? can you hear his voice?"

"What does that do?"

"I just – I just miss his sense of humor, really."

Like most other shows, "Mom" shut down last year when the pandemic closed the studio, but the time off turned out to be a blessing in disguise: seems Janney's own mom, in Dayton, Ohio, needed her. So, she moved back home for a while, during the beginning of the pandemic.

"My mother had gotten a diagnosis of cancer," Janney said. "And so, I flew back to see her. And I'm forever grateful for that, even though it was incredibly difficult and heartbreaking and really hard. Ultimately she lost her battle and she died in October of 2020. I wasn't there with her at the very end, which breaks my heart, but so, so glad I was there to …"

As sad as last year was, it actually gave Janney a chance to finally do something she'd long wanted to do:  cut her hair.

"And I said, 'Let's do it. Let's cut it.' And to be able to run my hands through my hair and have it just be my hair is just, it feels so great. It was pretty funny, though, when I came to show up for our first 'Mom' episode in October, when we started in 2020.  And the producers were like, 'Wwhat have you done? Bonnie can't – how are we gonna explain this?' I'm like, 'You guys, I've been wearing a wig since season one!' None of them knew that I had been wearing a wig. So, you know, now all of America knows that I was wearing a wig!"

The new 'do is proof Allison Janney is always up for something different. She'll make her debut as an action hero sometime soon, but not today. "I gotta protect myself a little, 'cause I'm tired," she said. "It's been a long run of back-to-back things, and I do need to take some time for myself."

What does that mean? "I don't know. What does it mean? I think it means, like, going off on a, you know, one of those meditation journeys or someplace where you go where you're not allowed to talk for a week."

Smith asked, "Does that appeal to you?"

"Yes! I have no idea, but I'd like to be open to whatever else might be out there for me. Maybe … I'm not gonna say it!"

"Oh, come on. Where were you going with that?"

"You could totally do that?"

"And so, after that, then maybe a meditation retreat. We'll see!"