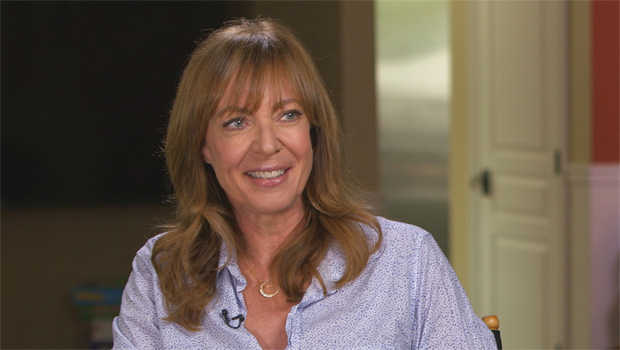 Actress Allison Janney plays a mom who doesn't exactly fit the "Mother's Day card" mold in the hit CBS series "Mom." It's a role shaped in part by Janney's real-life experiences, as Lee Cowan shows us in this Sunday Profile:

"The only way you can get through anything in life is through laughter -- it's the key," said Allison Janney, just as the lights went out during her interview. "That's comedy right there!"

Janney's career is so bright of late she doesn't even need lights.

Her latest Emmy -- her seventh, by the way -- came for her performance in a show that is decidedly unique. We're not saying that because it's Mother's Day, and the show just happens to be called "Mom" (or because it airs here on CBS). We're saying it because THIS particular sit-com is actually a pretty noble experiment. "We don't shy away from real life affecting these characters, even though it's a multi-cam comedy," she said.

Janney plays Bonnie Plunkett, a recovering addict helping her daughter, Christy (played by Anna Faris), who's also struggling with addiction. Doesn't sound too funny, but it is!

Christy: "Mom, I've watched you lick cocaine crumbs out of a shag carpet!"
Bonnie: "It's not a sin to be thrifty, dear."

Although it's a comedy, it takes a very serious look at the tenuous nature of sobriety -- the on-again, off-again struggle against drugs and alcohol -- and the grim reality of relapses.

"You can't do a show about recovery and not show the reality of it, which is, some people don't make it," Janney said.

She knows that all too well, because she watched her younger brother, Hal, go through it. He struggled with addiction most of his life, which leaves Janney sometimes struggling on set. "It's definitely played a part in why I took this show," she said, getting emotional.

She tried desperately to help her brother recover, but five years ago he committed suicide. "I was around the world of recovery a lot, trying to get my brother to want to recover," Janney said. "He didn't. He lost his battle with addiction and other things. And I felt like this was important for me to take a part like this and be a part of a show that showed people in recovery, and also showed that there was hope."

Last week Janney, along with "Mom" co-creator Chuck Lorre, were invited to take part in a White House roundtable with the Surgeon General to bring attention to the issues of both recovery and addiction.

But of all the roles Janney has played, this role of advocate is a new one. "It's terrifying to be Allison Janney in front of people," she said. "It's great to be Bonnie Plunkett on your TV. But it's scary to be me!"

She's well known for playing a wide range of people who aren't "her," including that mom on
Mom" (something she's not in real life). She's gone from a neglected housewife in "American Beauty," to a Mississippi socialite in "The Help."

She went from the alcoholic neighbor with a wandering eye in "The Way Way Back," to a wife discovering her sexuality in Showtime's "Masters of Sex."

"I don't know how you're in so many places at the same time," Cowan said.

"I don't know, Lee! I'm just glad that it happened, and I haven't been typecast into one sort of role."

Typecast, no. But it's hard not to think of Janney in one role in particular. She took home four Emmys for her performances as C.J. Cregg, the perfectly unflappable White House spokeswoman in Aaron Sorkin's "The West Wing."

While in Washington last week, she made a surprise visit to the White House Briefing Room, pretending to fill in for real-life spokesman Josh Ernest. "Let's be honest, I'm better at this than he is anyway, right?" she said.

She's convincing in the part, so much so even today people ask her advice on politics.

Cowan asked, "Growing up, were you a political family? Did you talk about politics at dinner?"

"So this was a completely strange world."

"Yes, and one that I felt such a pretender. I'm not interested in politics. I hate politics! I cannot stand to watch what's going on right now. It makes me ... I just close my eyes, I don't want to hear it. I don't!"

Janney grew up in Dayton, Ohio. Her father played jazz on the family piano; her mother was an actress. That's where the bug first bit.

While in a play at Kenyon College, she was discovered by one very famous alum -- Paul Newman -- and his wife, Joanne Woodward. They were so impressed they encouraged her to move to New York and enroll in the Neighborhood Playhouse.

But Janney was a late bloomer; her first break on Broadway didn't come until she was 38 (in a revival of Noël Coward's "Present Laughter").

"Were there times you thought about giving it up?"

In fact, she registered to take an aptitude test to find out what else she could possibly do.

"They told me that I would make a great systems analyst," Janney said.

"What does that mean?"

She had grown up wanting to be figure skater, but it a dream that ended when she ran through a closed sliding glass door as a teen.

"Well, I hit it, and then the glass fell on top of me, so it sort of guillotined my leg," she recalled. "It was bad -- I lost an artery, cut tendons. It was a bad accident."

No more ice skating, but she could still dance ... something she still loves to do, by the way, only now it's Zumba classes that she occasionally takes with her friend and "Mom" co-star, Jamie Pressly.

"I do love to dance," Janney said. "I don't go to clubs anymore really, because, who does?"

At 56, Allison Janney has a lot to smile about. While her brother Hal is never far from her heart, with "Mom" she's found a comfortable intersection of both her personal and professional passions, and gives her the chance to revel in her choice to never become that systems analyst.

She says she can't imagine doing anything else for a career. "No! There is nothing else I can do. I can't imagine ever retiring. I'm just going to keep doing it, I will, forever!"