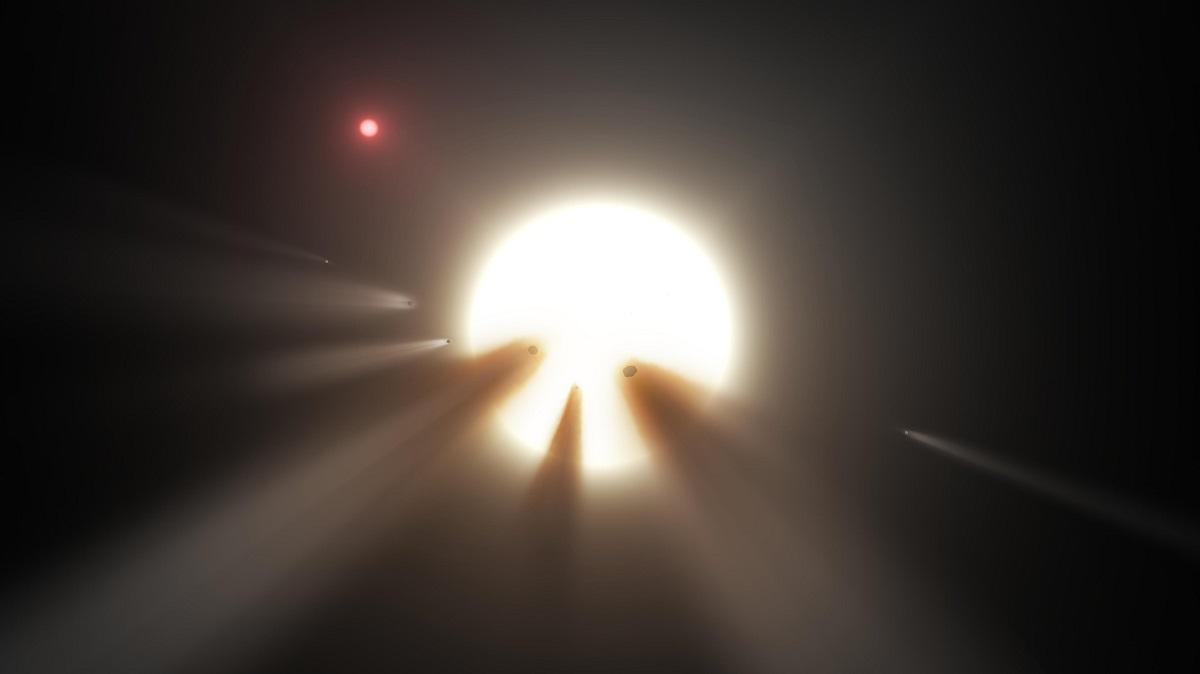 It has confused scientists for the past several years – a faraway star spotted by NASA’s Kepler space telescope that appeared to be dimming regularly. No one could quite figure out what caused these dimming events, leading some to wonder whether the star – known as KIC 8462852 – was an “alien megastructure” hovering in the constellation Cygnus. Now, a new study out of the Carnegie Institution for Science has only added to the star’s air of mystery.

The study by Carnegie’s Josh Simon and Caltech’s Ben Montet has been accepted for publication in The Astrophysical Journal.

Simon and Montet looked at Kepler’s observations and noticed that beyond the shifts in brightness, the star “faded slowly and steadily” over a four-year period. The main questions rest in why the star seems to fade in and out – do huge clusters of comets orbit around the star, for instance? Or is it a flickering sign of an extraterrestrial civilization?

The researchers wanted to examine evidence that the star’s brightness gradually decreased by 14 percent from 1890 and 1989, and delved into a group of the telescope’s calibration images that had not been used before for measurements.

“We thought that these data could confirm or refute the star’s long-term fading, and hopefully clarify what was causing the extraordinary dimming events observed in KIC 8462852,” Simon said in a Carnegie Institution press release.

What did they find? The bizarre star dimmed by nearly 1 percent over the course of Kepler’s first three years of observations. More shocking is that its brightness then went down by 2 percent in just six months, and stayed that way for the final six months of the Kepler mission. The researchers took this data and held it up against observations of 500 similar stars pinpointed by Kepler.

A small number of these stars faded in a similar way over Kepler’s initial three years. That being said, none of the other stars displayed either the same drastic dimming in six months nor the total brightness change of 3 percent.

“It is unprecedented for this type of star to slowly fade for years, and we don’t see anything else like it in the Kepler data,” he added.

“This star was already completely unique because of its sporadic dimming episodes. But now we see that it has other features that are just as strange, both slowly dimming for almost three years and then suddenly getting fainter much more rapidly,” Simon said.

Basically, rather than providing clear answers, this new research adds more mystery to the star.

The star first made headlines about a year ago, when Tabetha Boyajian, a postdoctoral fellow at Yale, published a study on the star in Monthly Notices of the Royal Astronomical Society. Like this current research, Boyajian’s work led both scientists and casual space fans alike to scratch their heads and head down the proverbial rabbit hole of the hunt for advanced extraterrestrial life.

“This is an oddball, a real oddball,” physicist and CBS News science contributor Michio Kaku told CBS News last year. “Kepler for years has been giving us a catalog of over 1,000 extra-solar planets and this is the first oddball out of hundreds of thousands of stars scanned. This is the first one that does not fit the usual scenario.”

As far as the story behind this star is concerned, the truth is still out there.

What online tutoring programs can do for kids
View CBS News In
CBS News App Open
Chrome Safari Continue
Be the first to know
Get browser notifications for breaking news, live events, and exclusive reporting.